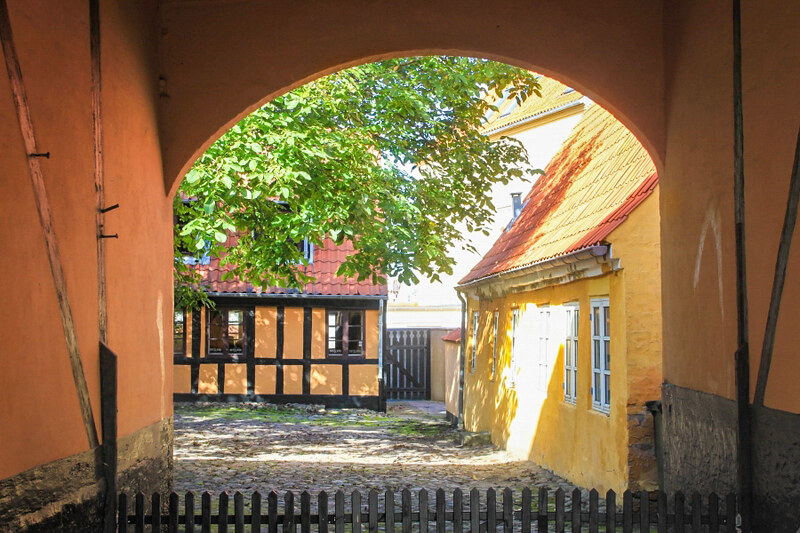 Ahh, Djursland. The endless beaches, nature and ice creams are reasons alone to visit Djursland. Most of my life, I’ve lived close to Djursland, so we take many trips out there during the year. But apart from other Danes, fellow Scandinavians and Germans, it’s still undiscovered territory for most travelers who visit Denmark.

Granted, it’s a bit out of the way from Copenhagen, but if you do make it there, it’s worth the trip.

In this post, I’ve gathered the ten best Djursland sights so you have it in one place. I’ll write more about the sights in separate posts, but until then, here’s a collection of all my top reasons to visit Djursland.

Djursland has some larger cities like Ebeltoft, Rønde and Grenaa, but mostly it’s just raw, untouched nature where people come to relax. You’ve got the beaches of which Fjellerup Strand and Følle Strand are some of the most popular. And then there’s Mols Bjerge; a national park where you can hike, bike or just bring a picnic basket and enjoy the landscape. Djursland has so many scenic routes, which also makes it perfect for a fun road trip.

All of this is topped off with the charming Danish half-timbered houses that you’ll find particularly in Ebeltoft and Grenaa. It’s a nature paradise and will give you a glimpse into the Danish culture and history. 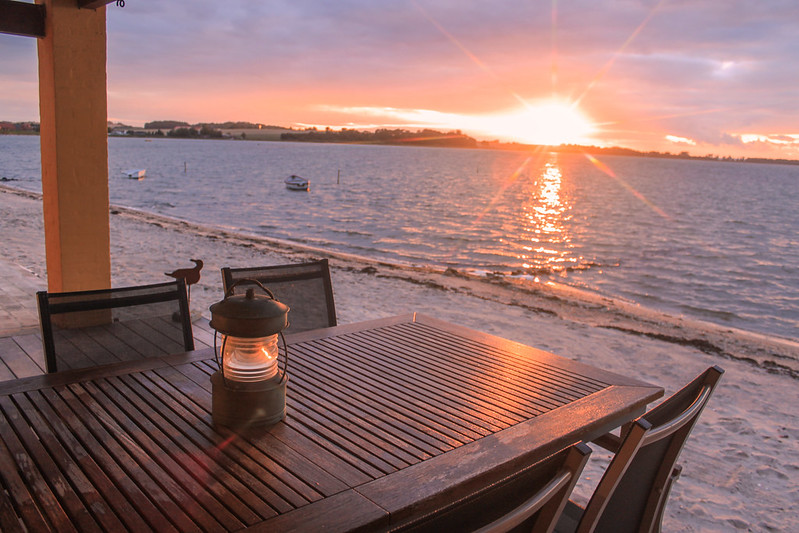 So, if you’re like: But where the heck is Djursland? Let me show you on this map.

Djursland is a peninsula northeast of Aarhus. It’s not very large. Just 44 km × 33 km and it marks the entrance to the Baltic Sea, between Denmark and Sweden.

How to get there
Getting to Djursland is pretty straight forward. You can take a bus or go by car from anywhere in the country. Or you can take the ferry from Sweden or Sealand (Copenhagen) and drive there.

Copenhagen – Ebeltoft: 356 km (3,5 hours by car). You can also take the ferry, train or bus to Aarhus and another bus from there. 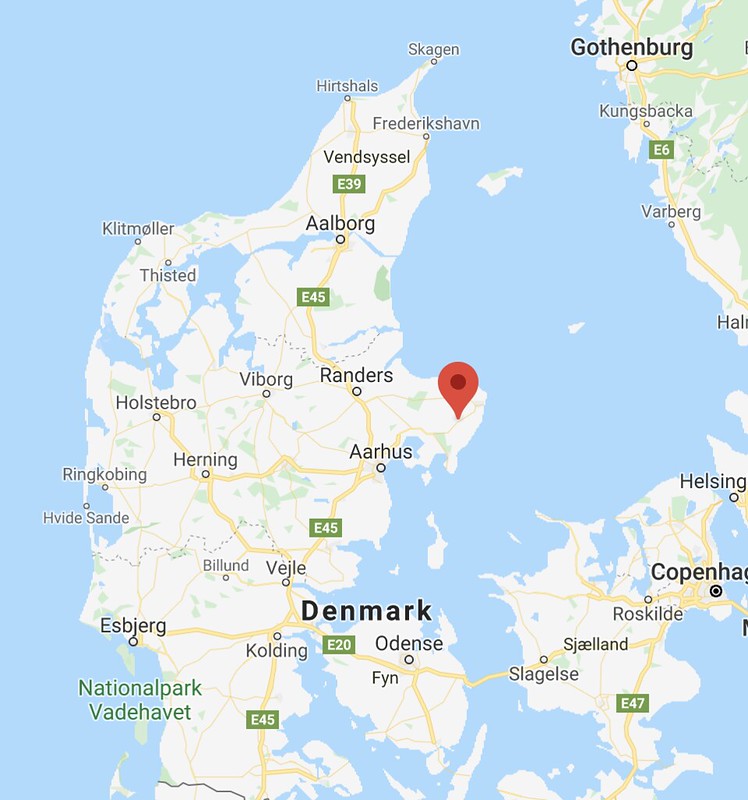 So, let’s begin with the iconic Ebeltoft. It’s such a charming town that I’d put it on a top 5 list of best cities in Denmark. Why? Because it’s Danishness through-and-through. You’ve got the quaint half-timbered houses, a medieval vibe and winding cobbled streets, not to mention the fact that it’s surrounded by the ocean, nice beaches and a lively culture scene during the summer.

Ebeltoft is one of the most idyllic fairy tale towns in Denmark (along with Ribe, Faaborg and Svaneke). That’s why we all flock there in the summer. It’s just such a lovely little town.

How to get to Ebeltoft
Ebeltoft is conveniently located for public transportation. Take a bus from Randers (bus 214) or from Aarhus (bus 123). 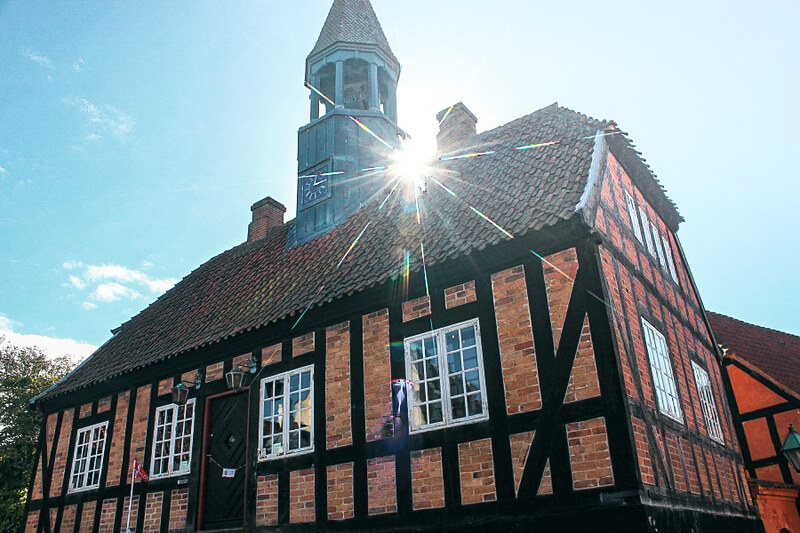 The reason I and thousands of others keep coming back to Djursland is this deliciousness! Ok, so maybe everyone else don’t go there just for ice cream, but I sure do.

Not only do they have amazing “guf”, a topping made of whipped egg whites with sugar and fruit flavoring, but they serve you enormous scoops! I never order more than one or two scoops, which everywhere else is the same as four with a hugh chunk of guf on top. And the cones are home-baked on the spot. 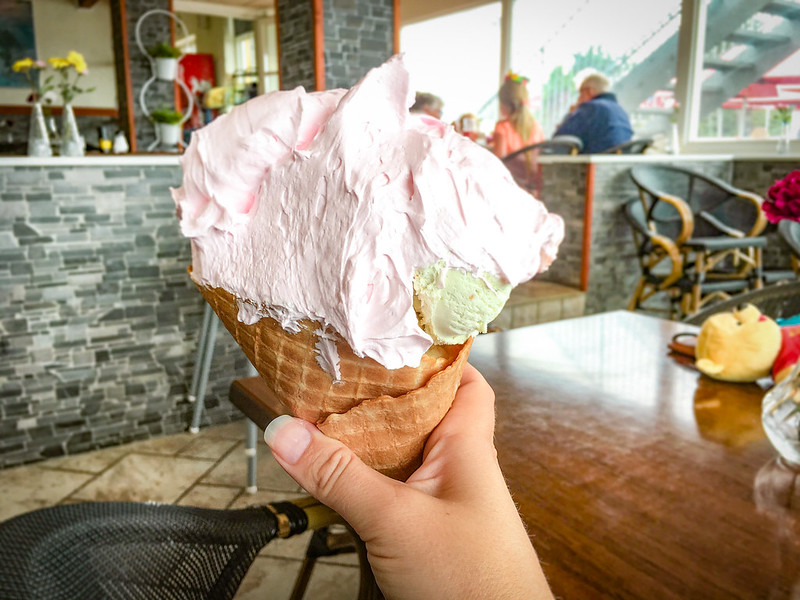 Most of Thomas’ family comes from Mols so we’ve spent some time there during the years. Mols is the southern part of Djursland – the most beautiful part if you ask me – and it’s covered by Mols Bjerge (Mols Hills), which today is a national park. Mols Bjerge covers quite a large area and it’s perfect for picnics, hikes, bike trips or a road trip.

The most important sight in Mols Bjerge is Poskær stenhus, which is the largest round barrow in Denmark, dating back to 3.300 B.C. It’s just like a mini Stonehenge and pretty impressive considering it’s been there for 5,000 years!

Mols Bjerge is free to visit.

How to get to Mols Bjerge
Having a car is essential to exploring Mols, but you can also take a bus to Rønde or Ebeltoft and bike from there to see the nearby area. 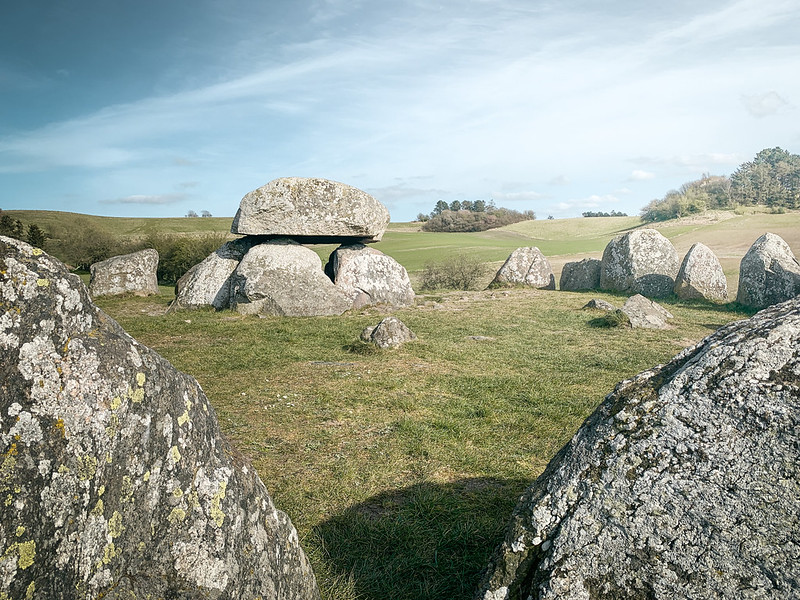 When you just enter Mols and drive south, you can’t help but notice a causeway leading to a castle ruin in the sea. It’s placed in Kalø Vig, a small cove where you’ll see kite surfers aplenty. Kalø castle was built in 1313 by the Danish king Erik Menved and was one of at least four similar strongholds in Jutland.

It’s a bit of a long but not difficult walk from the car park to the castle ruin, but it’s very scenic. Both the walls and tower are well preserved and from the tower there’s a beautiful view of the bay.

Definitely a reason to visit Djursland!

How to get to Kalø Castle Ruin
Rønde is the closest town to Kalø Vig (11 km), but I’d say that you need a car to see the castle. It’s just too far to walk back and forth.

Every kid in Denmark knows Djurs Sommerland. It’s the largest amusement park in Scandinavia, has the highest roller coasters in Denmark, and it’s been named the best family park of the year in Europa. If you’ve got kids, this is where to go and spend a super fun and active day. You’ve got 60 fun amusements to choose from, including a water park, theme countries, roller coasters, fun games and hygge!

How to get to Djurs Sommerland
Djurs Sommerland is located in the small town of Nimtofte. The bus from Randers (bus 214) and Aarhus (bus 400 and bus 121) stops there. 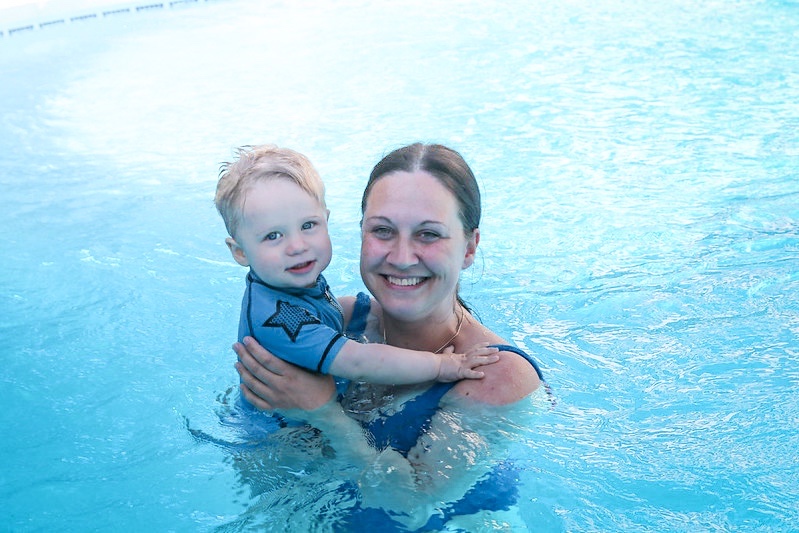 I’ve spent many summers in Fjellerup. As a kid, we usually spent a week or two camping here, and I loved it. Fjellerup has two camping spots; one by the sea (Fjellerup Strands Camping) and another in the forest, closer to town (Hestehaven Camping). There’s also a huge amount of summer houses in the area.

Fjellerup Strand is also a perfect destination for a day trip, though. It’s a 50 minutes drive from Aarhus and easily reached by bus or car. Fjellerup town doesn’t have much to offer, but the beach is a popular place during the warmer months, and obviously also because of Fjellerup Vaffelbageri, which is right by the beach.

How to get to Fjellerup Strand
If you don’t have a car, take bus 213 from Randers or the tram from Aarhus to Grenaa and continue on bus 213 to Fjellerup. 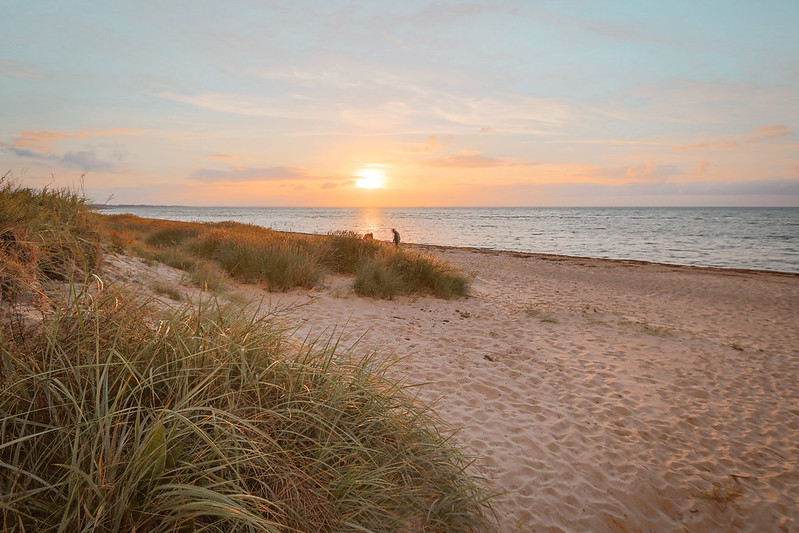 In south Djursland, you’ll find Helgenæs. A small peninsula with a name that means “holy point”. Helgenæs is small, but still enriched with steep cliffs, rolling hills and wide views. At the tip, there’s a lighthouse, Sletterhage fyr, which was built in 1894 to help guide ships to and from the port of Aarhus. Right next to it, you’ll find a path along the beach towards Tyskertårnet, which is a German radar tower from WWII.

The lighthouse is open from June to August, where you can enjoy the view from the top. The water is not not suitable for swimming. If you visit during autumn, this is a great place to pick mushrooms and wild berries.

How to get to Sletterhage lighthouse
You need a car. Simply go south and follow the signs to Helgenæs.

I just discovered Sangstrup Klint or in English: Cliffs of Sangstrup and they really impressed me. Denmark is a pretty flat country, probably one of the flattest in the world. So, it doesn’t take much to excite me when it comes to cliffs and dramatic hills.

The cliffs are 17 meters tall, 5 km long and made of limestone. They are SUPER old as they originate from a 65-million-year-old coral reef in a prehistoric and tropical Danish sea. Along the cliffs, you can find corroded cannonball holes from German warships during WWII and caves hollowed by the sea. There are some really strange rocks at the beach and you might even find a fossil, which is legal to bring home.

Read next: How to visit Sangstrup Klint

How to get to the Cliffs of Sangstrup
Sangstrup Klint is located 7.7 km north of Grenaa. You can take the bus or tram to Grenaa, but that’s as far as public transportation goes. If you have a car, you can drive all the way down to the beach. 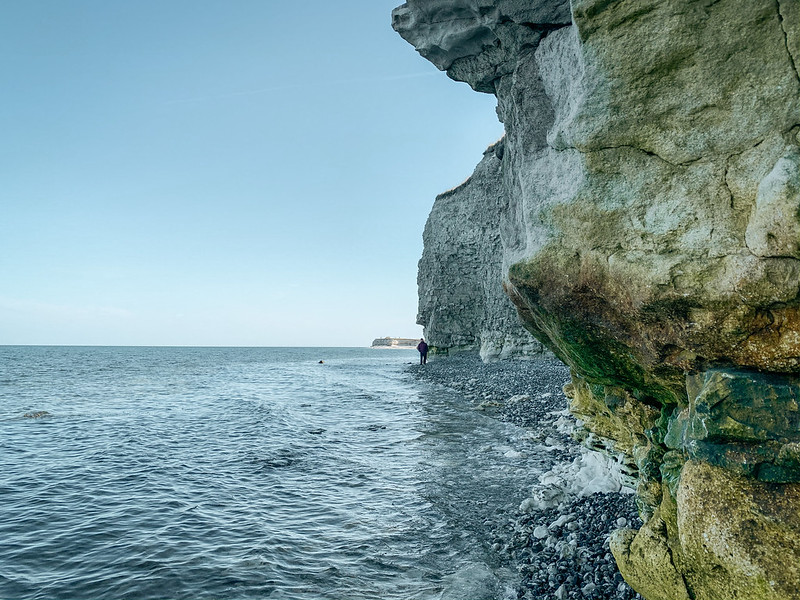 One of the most charming castles in Denmark is located in Djursland. Actually, Djursland has several castles, including Clausholm Castle where we were supposed to get married, before we eloped and got married in Thailand.

Old Estrup Manor is a true Danish gem. This red-brick Renaissance manor house has a wood-fired kitchen from the 1880s where you can buy cake and coffee. The manor dates back to 1340, and in the museum you can view the development of Danish nobility through the ages. The rooms are furnished as they might have been back then.

Old Estrup Manor also has a beautiful Baroque garden (you might remember I took my brother’s wedding photos here) as well as farm animals, lots of vegetables and an apple plantation. It’s perfect for a half day trip.

How to get to Old Estrup Manor
Check out the best ways to get there by bus and car right here. 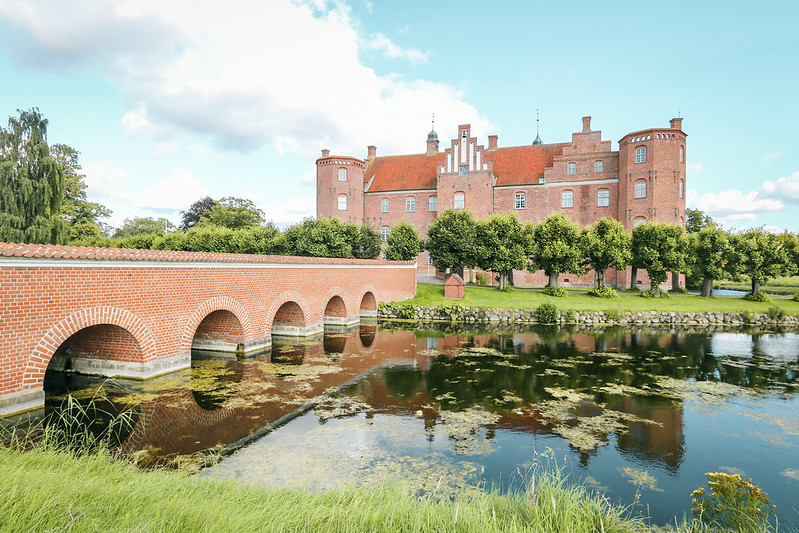 Another great reason to visit Djursland is Fregatten Jylland, also known as the Danish Frigate Jutland.

It’s one of the world’s largest wooden warships and is both a screw-propelled steam frigate and a sailship. Fregatten Jylland took part in the Battle of Heligoland in 1864, and today you can visit it as a museum ship. There’s a quiz with clues around the ship for kids, and the adults can take a guided tour. It’s a fun experience if you visit Djursland.

How to get to Fregatten Jylland
Fregatten Jylland is located in Ebeltoft, which you can get to by bus or car. Once you’re there, head to the harbour and you can’t help but notice the impressive ship. 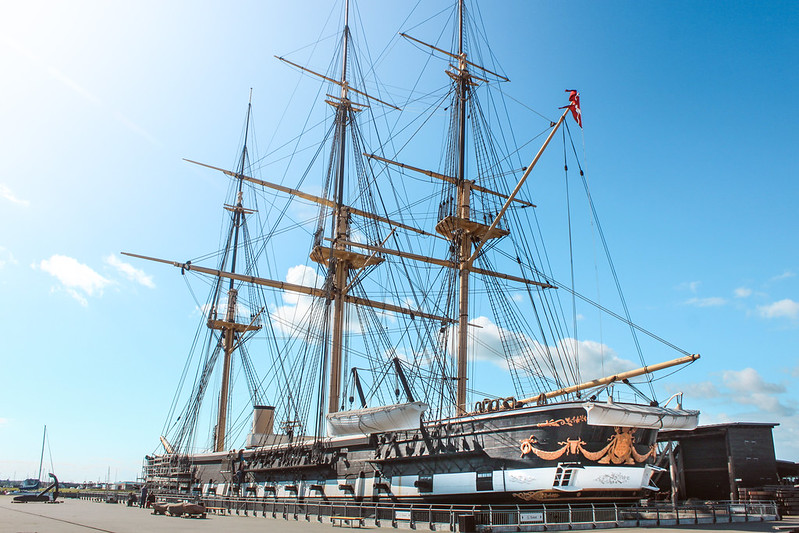 Planning a trip to Djursland? Ask me anything in the comments! 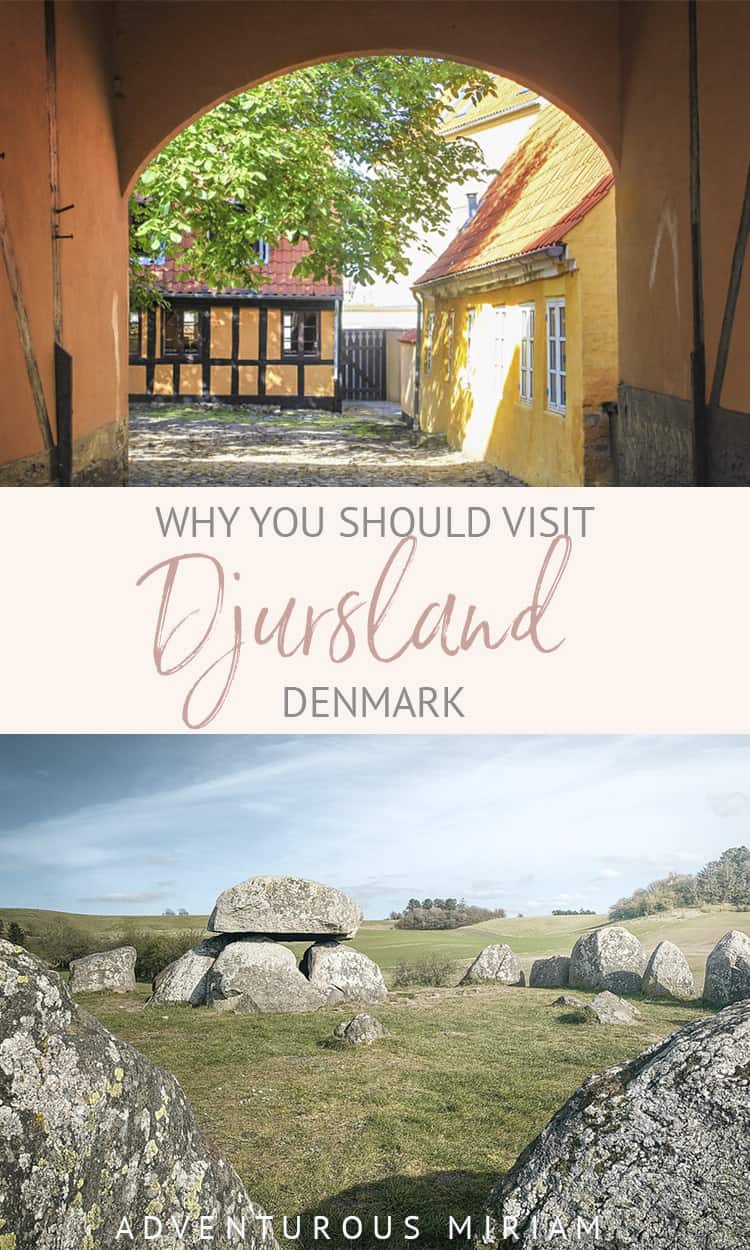