12 reasons to visit Ribe – the oldest town in Denmark 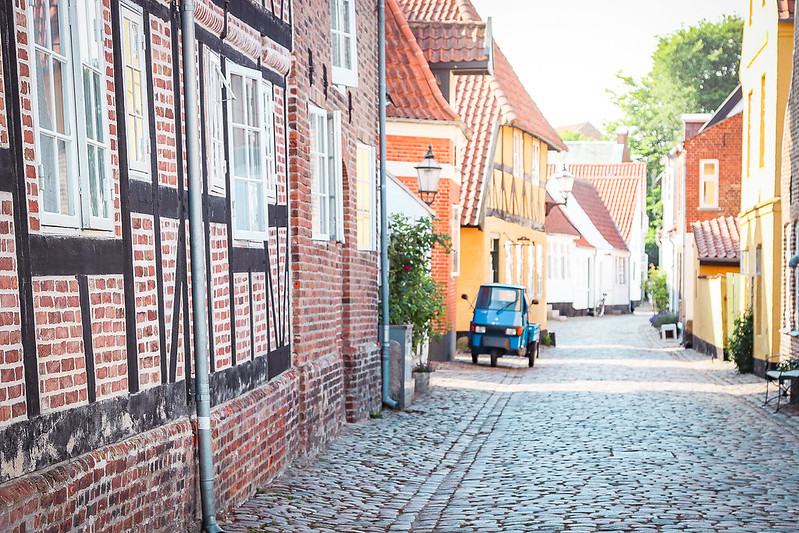 If you’ve read my blog, you probably know that I love quaint towns, and I love living in quaint little Denmark. It’s funny because most of my life, I’ve always been more to exotic countries so I thought I’d end up living in Thailand, Australia or the Caribbean.

Yeah, so that’s still not off the table, now that I come to think of it, but for now, I’m very happy with my life in Denmark. One of the reasons for that is that I can visit cities like Ribe.

Ribe is just a few hours from where I live, yet it still feels worlds away. Thomas, his mother and I went on a Denmark road trip some time back where we decided to visit Ribe. We all loved it right away. From the cute little B&B we stayed at to the cosy restaurants and the medieval houses.

Have you ever heard of Ribe? Most people outside of Denmark haven’t. Then they visit by accident and fall in love with the city. At least that’s what I’ve heard from more or less everyone visiting.

There’s just something about Ribe. We have other towns in Denmark that are also super charming with half-timbered houses and winding cobble streets. Like Ebeltoft, Faaborg or Sæby. But Ribe has something the other towns do not have. It’s PACKED with dramatic history and it’s the oldest of them all.

Whether you visit Ribe for a day, a weekend or a week, there’s plenty to see and do in the town and the nearby area. You won’t be bored, I promise you that.

Let’s take a look at why you should visit. 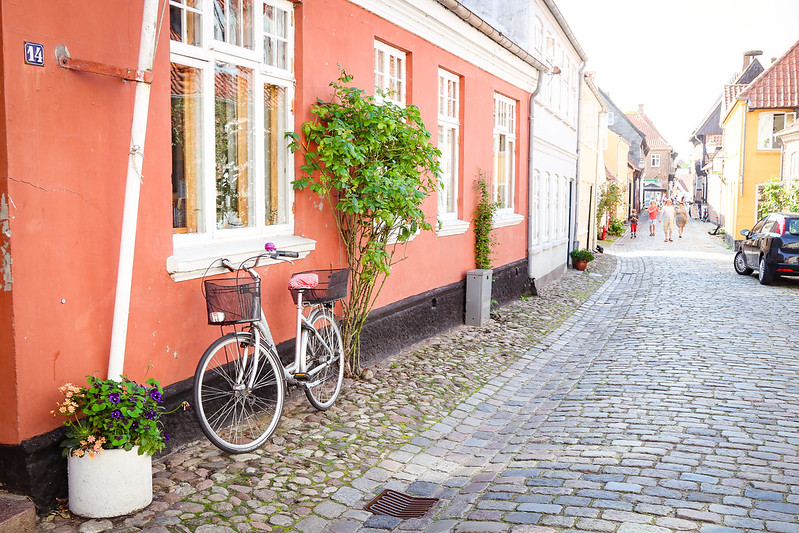 First of all, there’s a small town charm to Ribe that you simply won’t find in larger cities (or many small cities either for that matter). Another great thing about Ribe is that it’s so close to the famous Wadden Sea National Park (more on that below), white sandy beaches and Legoland. That makes it a perfect base for exploring more of Southwest Jutland. 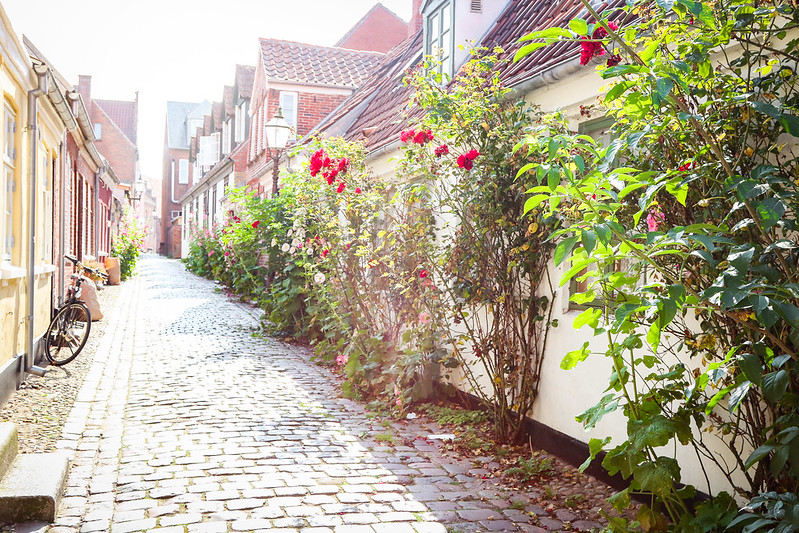 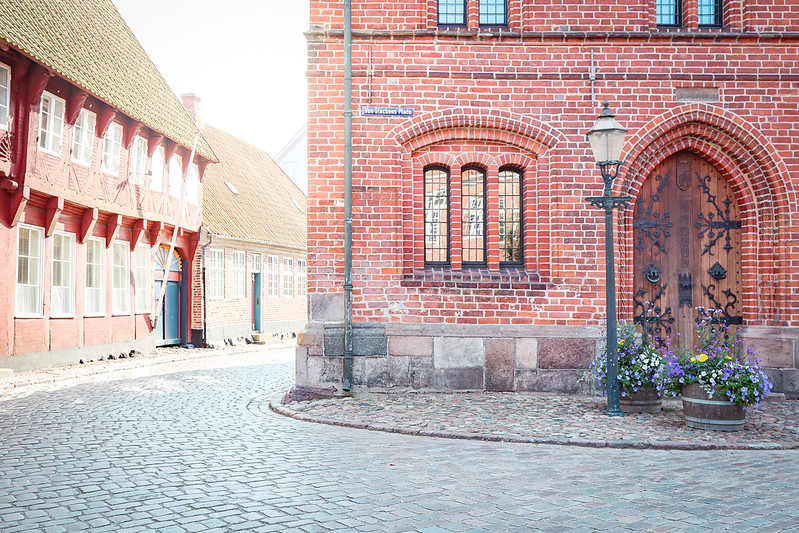 The oldest town in Scandinavia

Founded around year 700, Ribe is the oldest town, not only in Denmark, but in all of Scandinavia. I think that’s pretty cool.

Back in the Viking Era (793–1066 AD), it was an important trade town for the vikings because of its strategic location linking Scandinavia with the rest of the Nordic countries.

Since then, Ribe has seen its fair share of turmoil. First a devastating fire in 1580 where 213 houses burned down, and then a severe flooding in 1634 that caused serious damage. But Ribe kept its medieval charm. 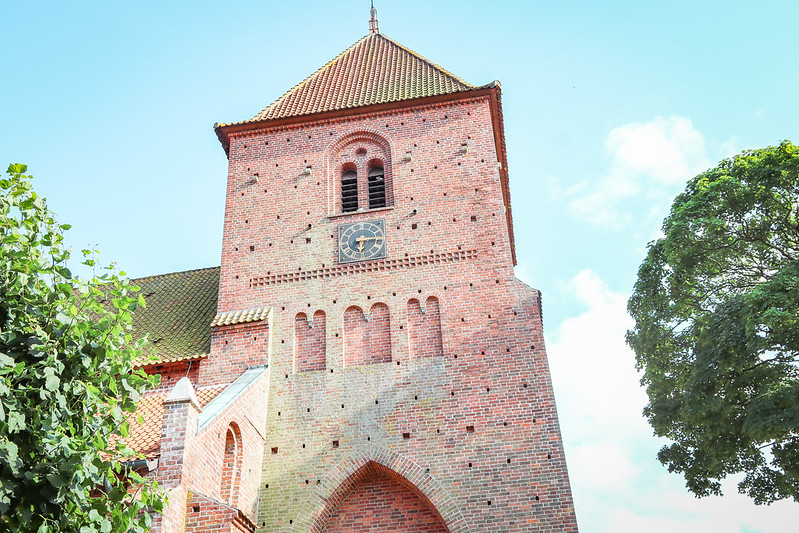 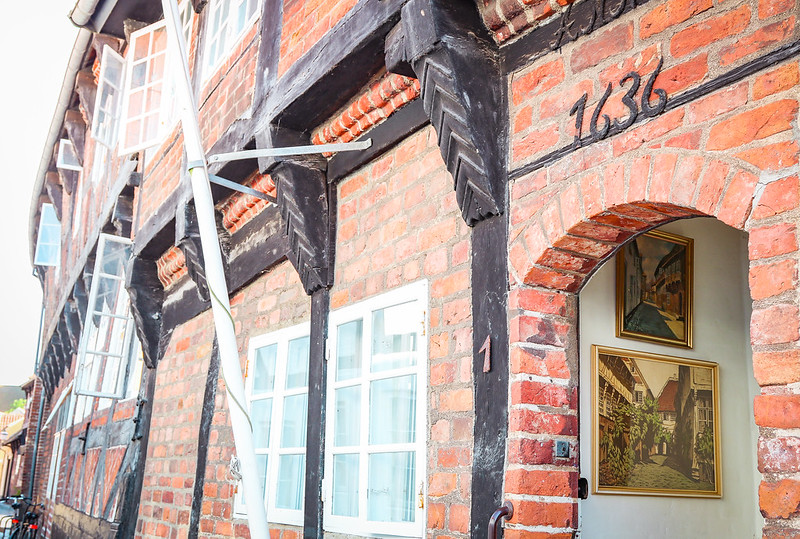 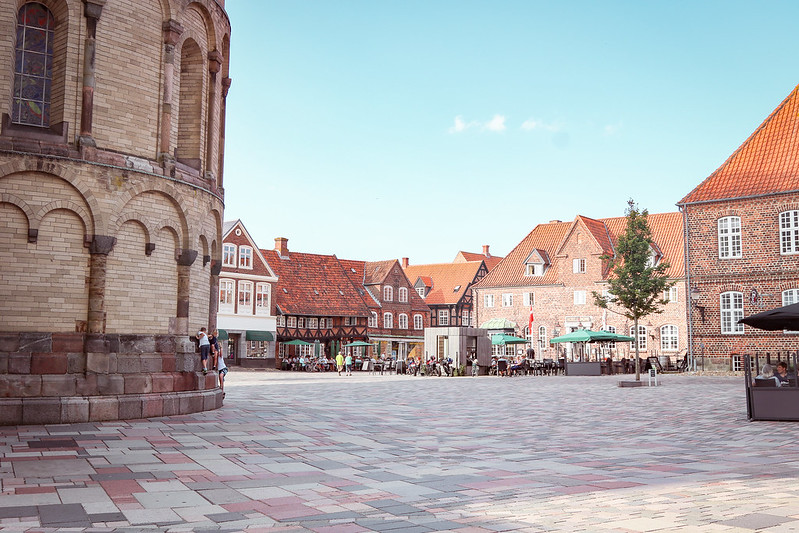 Learn about the Vikings

Ribe has an interesting Viking center. Here, you’ll see how we lived 1200 years ago and experience how it is to be a viking for a day. The reconstructed Viking village also shows how weapons and clothes were made, and you can try some of the fun activities like Viking cooking, wood carving or archery.

Ribe Vikingecenter is only open during summer. 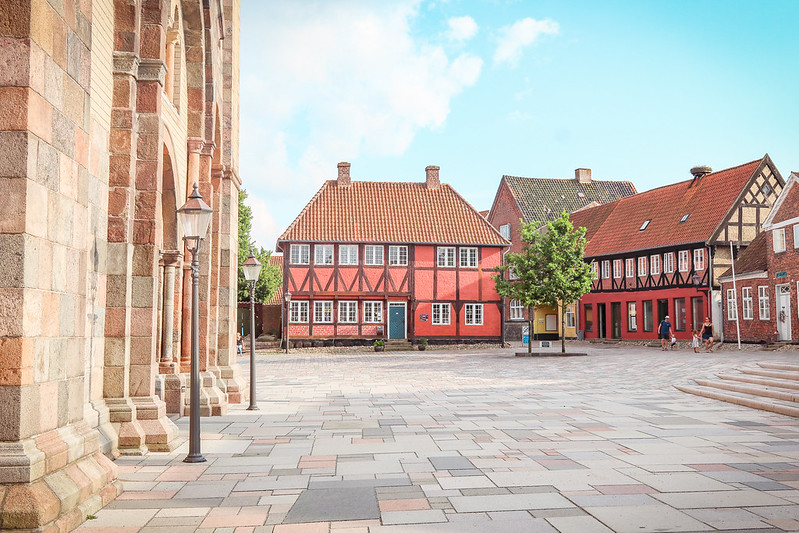 Ribe Cathedral is probably the first sight you’ll see when you arrive. It’s the landmark of Ribe for several reasons:

It’s the oldest cathedral in Denmark, the most-impressive Romanesque building we have and the only church in the country with five naves. If you’re not afraid of heights, you can climb the 248 tower stairs to get a beautiful view of Ribe and the countryside. 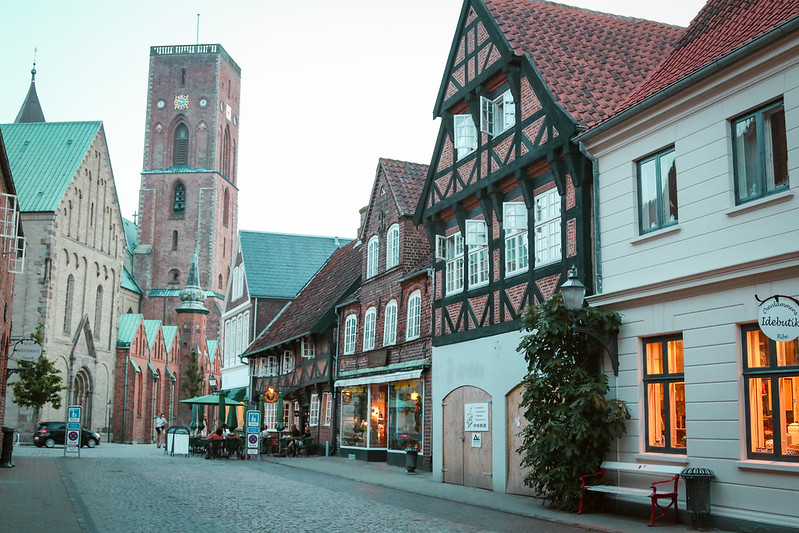 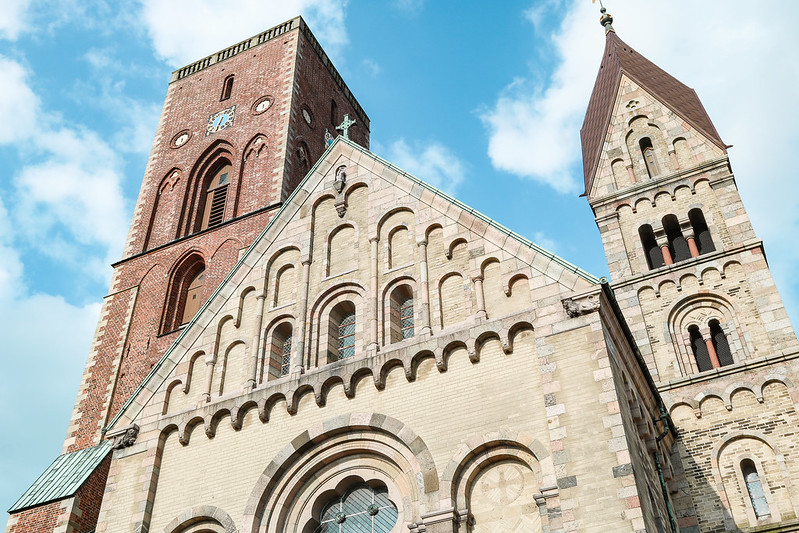 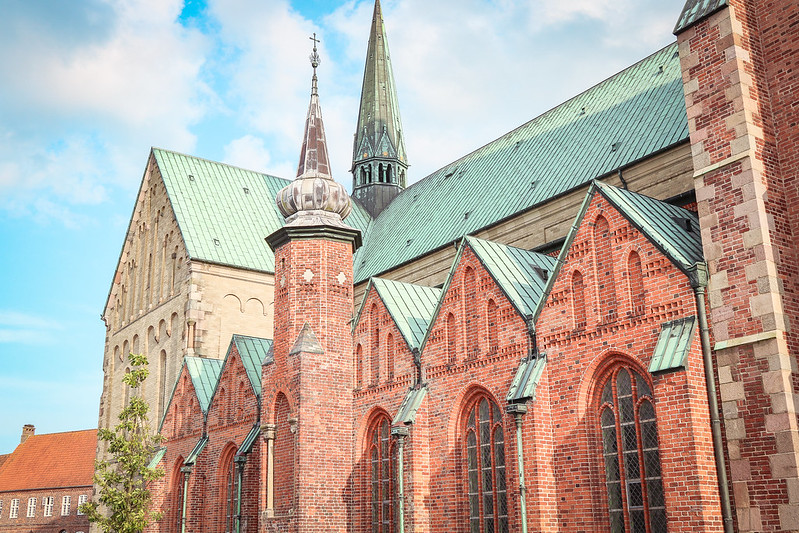 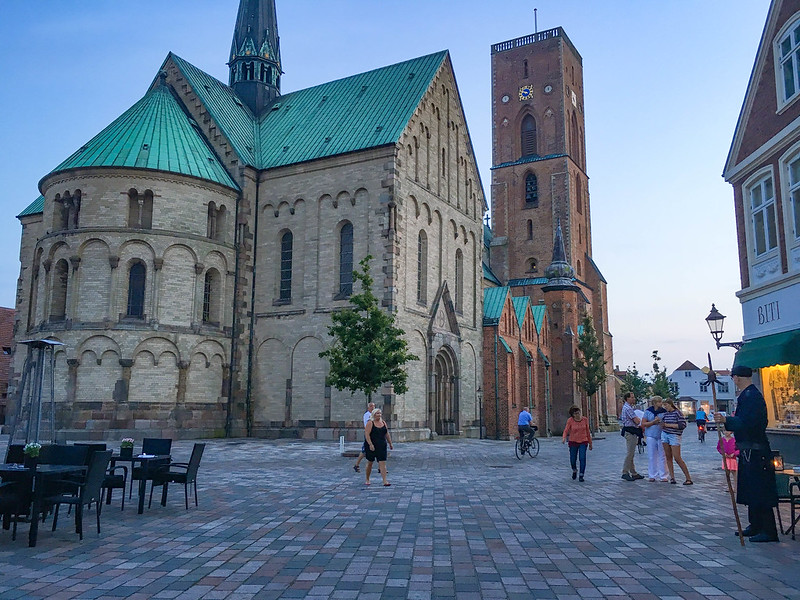 Back in elementary school, I heard about the witch hunt in Denmark for the first time. It’s a dark and awful part of our history and many of the witchcraft trials took place in Ribe itself.  The best known victim of the persecution of witches in Denmark is Maren Spliid. She was born in Ribe and burned at the stake for witchcraft in 1641.

There’s a memorial stone for her in Ribe. And if the witch trials peaks your interest, you can (from July 2020) visit Ribe Witch Museum HEX, the first of its kind in Denmark. Here you’ll learn about the witchcraft trials of Europe and Denmark. 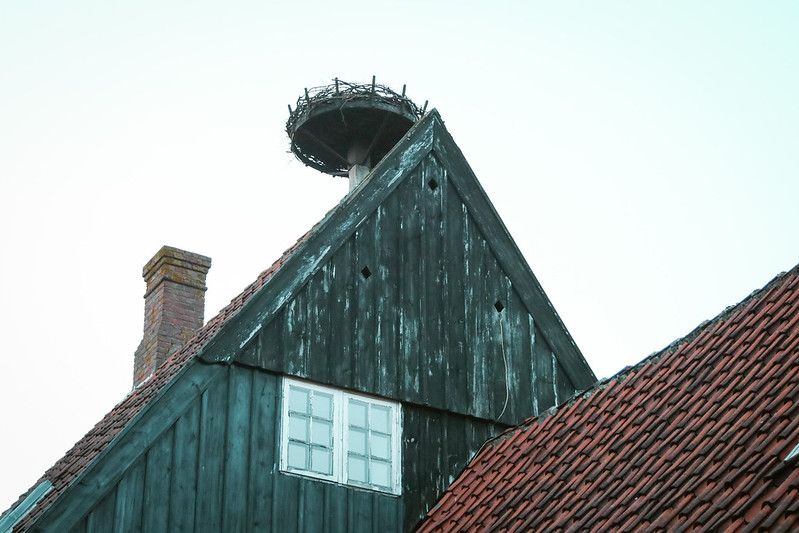 Jacob A. Riis – a Danish hero

On a more positive note, you can visit the birthplace of Jacob A. Riis.

Never heard of him?

Well, Jacob was a local, who left for New York in 1870. While living there, he experienced the city’s slum, which he wrote about in his first book in 1890, How the Other Half Lives. Jacob was a friend of Theodore Roosevelt, who offered him a job as mayor of New York, but he declined to pursue his efforts in getting people off the streets. For that work, he became known as “the most beneficial citizen of New York”.

There’s a museum for him in Sortbrødregade 1. Read more about it here: Jacob A. Riis Museum. 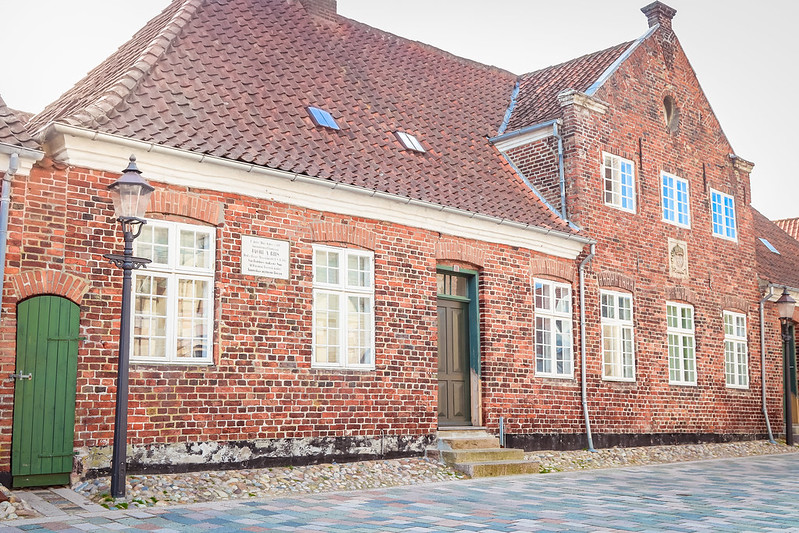 This is where he was born

Ribe has a beautiful medieval town centre with more than 100 well-preserved old buildings under Heritage Protection.

You can just wander around and admire the charming half-timbered houses, that’s what I love to do. I actually live in one myself and they’re just as cosy on the inside. 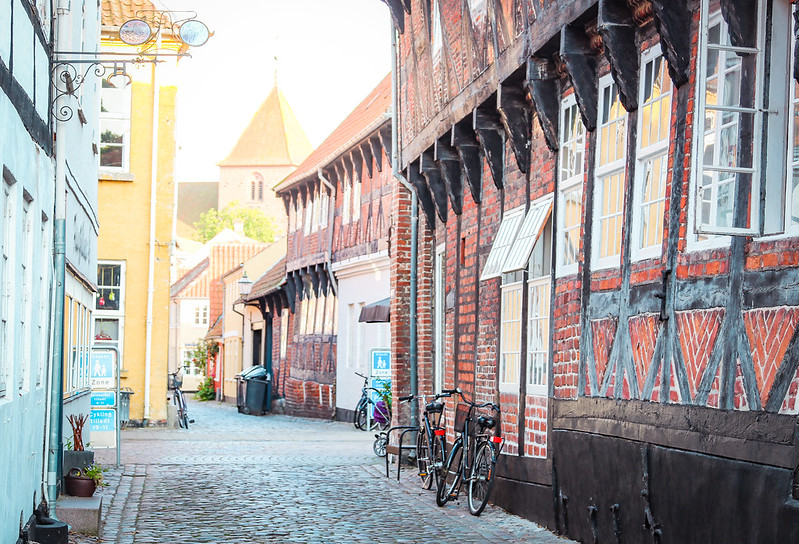 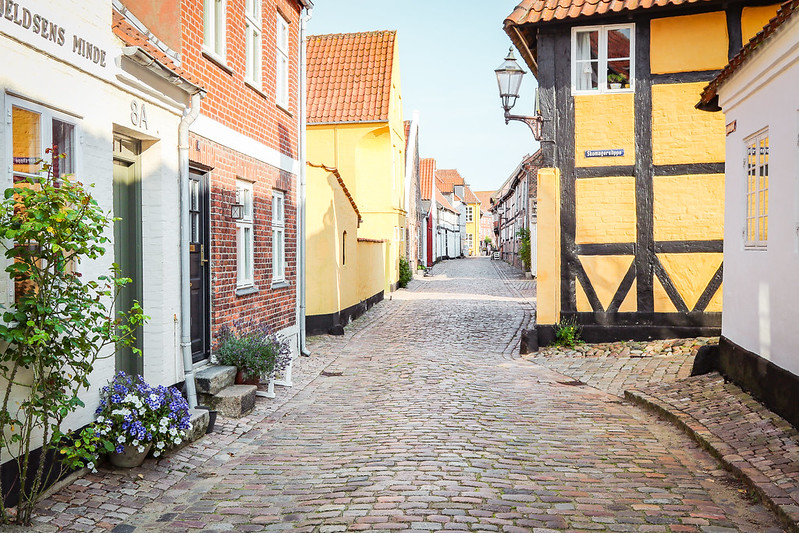 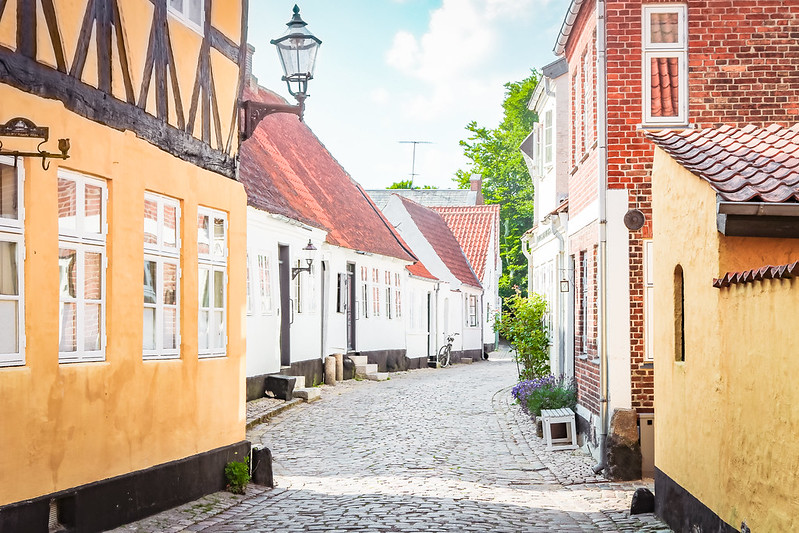 One of the things you might notice around town is the doors. Like the green main door on the cathedral. If you look right above the door, the relief shows Jesus being taken down from the cross. It’s called “the cat’s head portal”, because of the two lions at each side of the doorway. 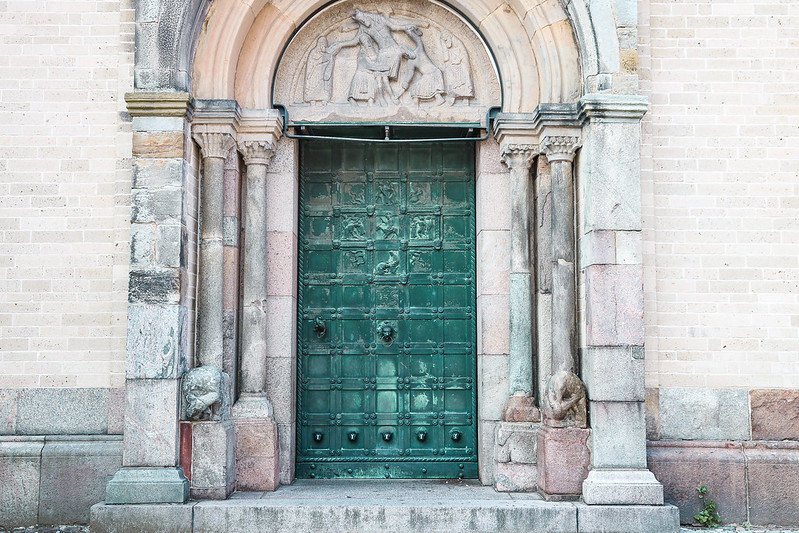 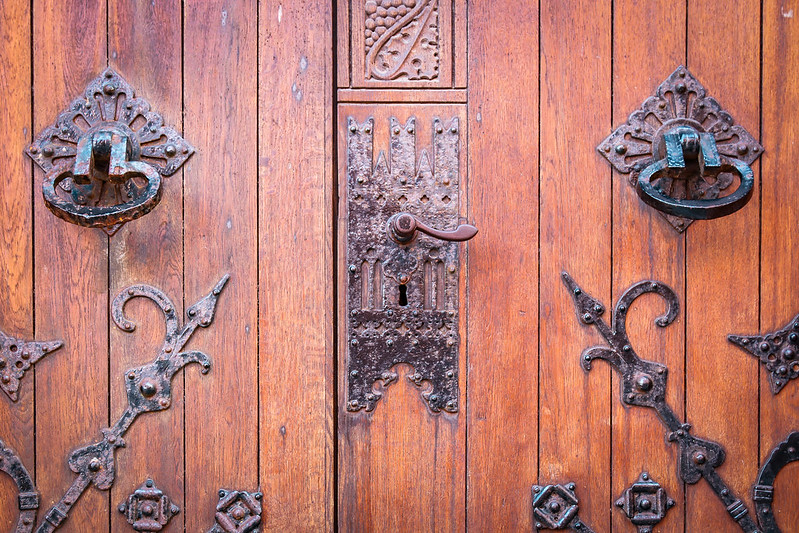 If you walk around the cathedral, you’ll see a few statues. There’s one of Hans Tausen (1494–1561), who was a leading figure of the Reformation in Denmark.

Another statue pictures Hans Adolf Brorson (1694–1764), who was one of Ribe’s best remembered bishops. Most Danes, myself included, know him mostly for his hymns in the Danish National Church. 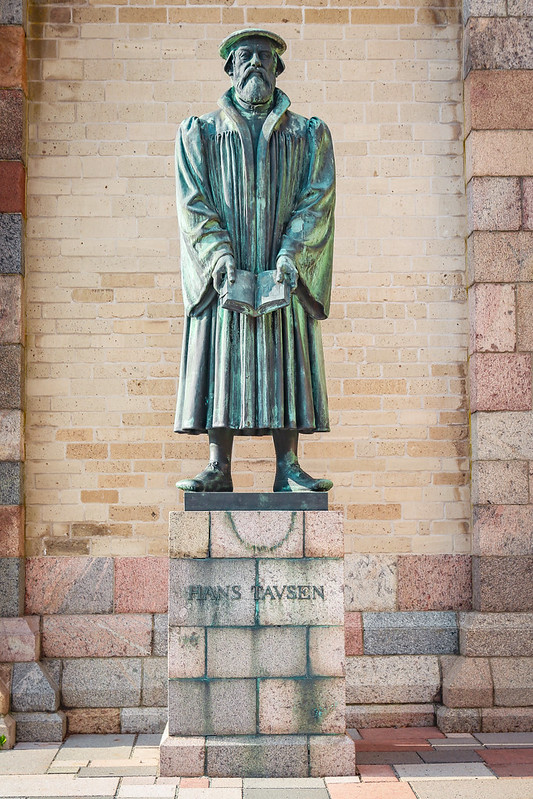 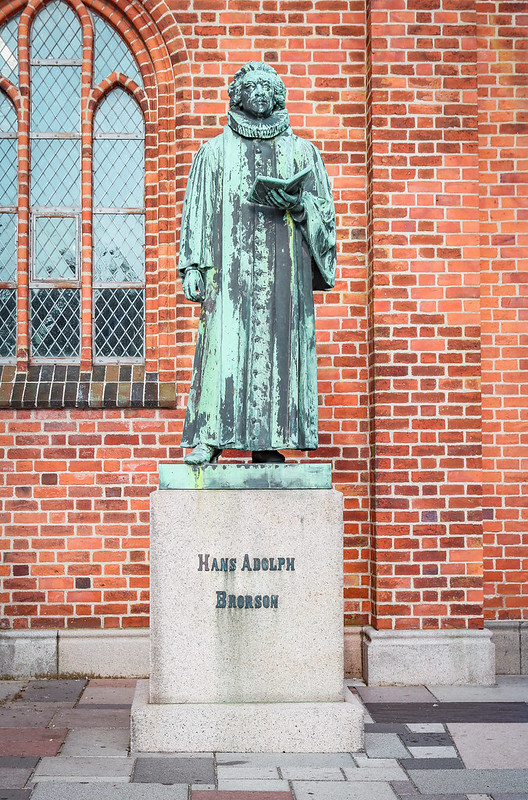 This is a fun one.

You shouldn’t miss the Night Watchman – armed with his lantern. See if you can find him and then listen to his stories as he walks his traditional round through Ribe’s historic streets. 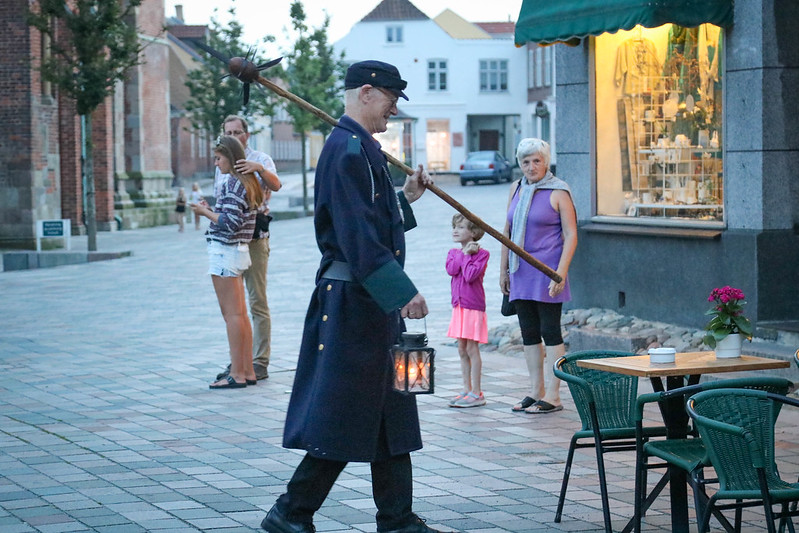 I love the flood column in Ribe. It’s right next to the river, and you can see the different heights of the flood depending on when you arrive. The walk down to it takes you along a very beautiful street. 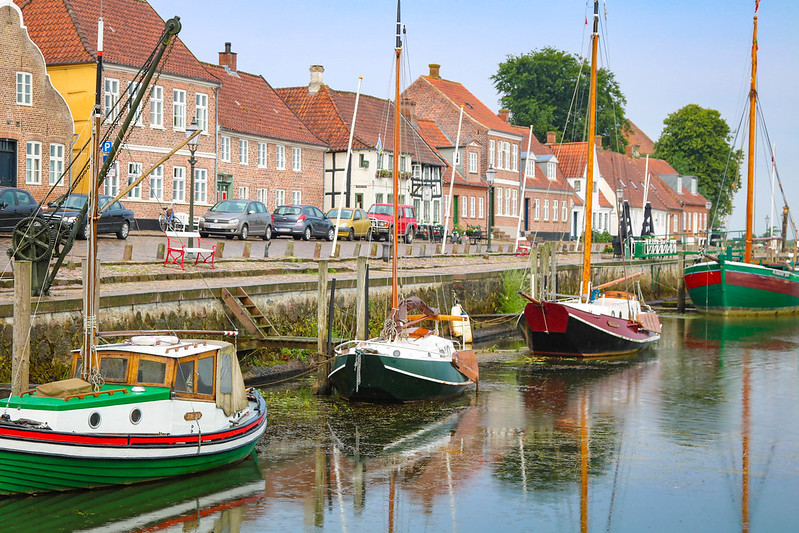 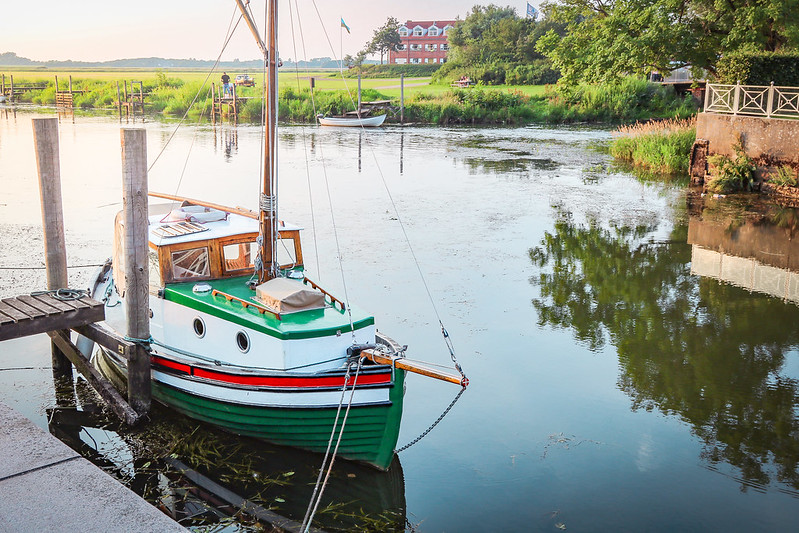 Right next to Ribe is Vadehavet (the Wadden Sea). It’s a national park and UNESCO site, where the North Sea water flows into the Wadden Sea twice a day, flooding the mud flats with seawater. During low tide, you can go or drive out there and experience how it feels like to walk on the sea bed. We spent a day driving out there and got to see how the water came back in.

If you visit during spring or autumn, you might see the most famous natural sight in Denmark – black sun (sort sol). Black sun is when hundreds of thousands of starlings turn the sky black by dancing and circling around. It’s a really unique sight! 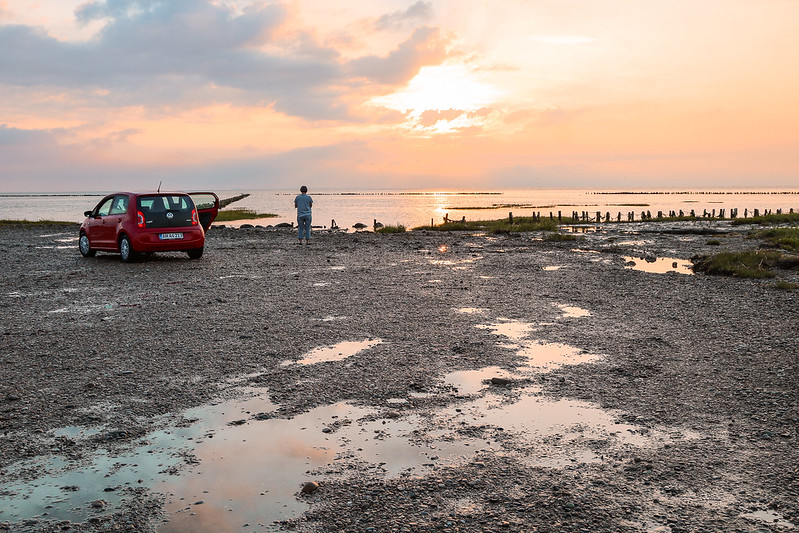 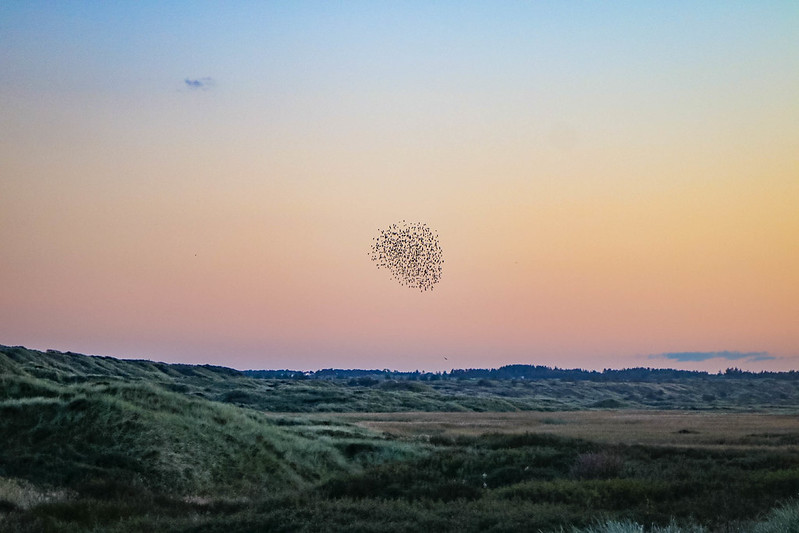 This is a mini black sun – they’re normally much, much larger

How to get to Ribe Denmark

Once you’re there, the city is very walkable. It’s flat and small, which makes it perfect for both elderly and families with kids. If you’re up for it, you can rent a bike and experience the Danish landscape. Your host might have one you can rent, or they’ll probably know where you can get one. We’re Danes, after all. Everyone owns a bike.

Where to stay in Ribe

I highly recommend spending the night! We did, and it’s such a cosy place. Ribe has accommodation in all price ranges, but if you want the real deal, go for a Bed and Breakfast to see how we live in Denmark. 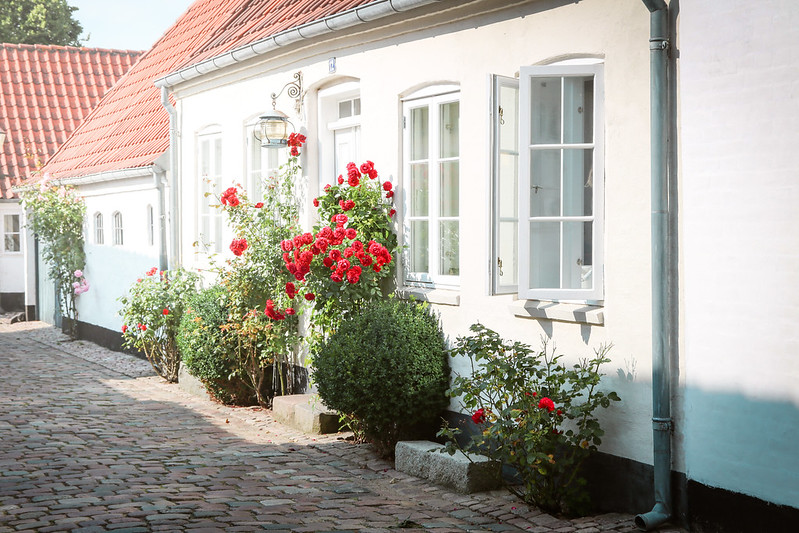 Planning a trip to Ribe Denmark? Ask me anything in the comments 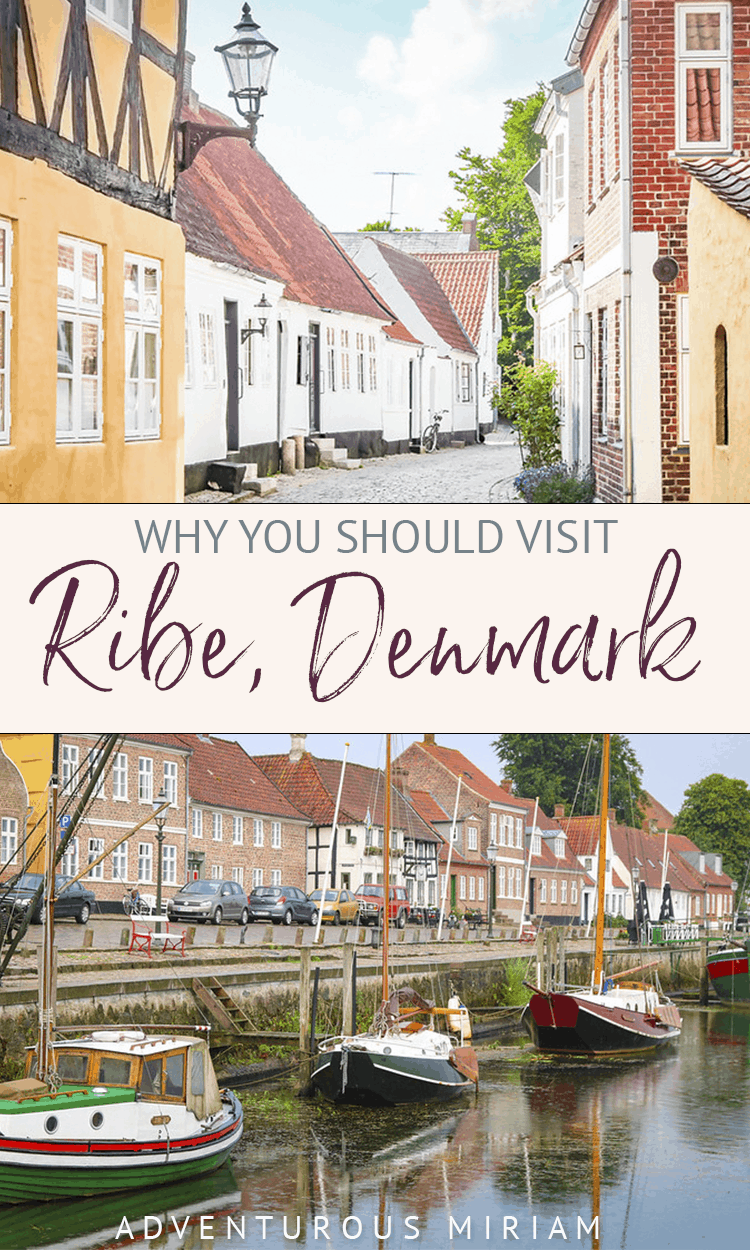