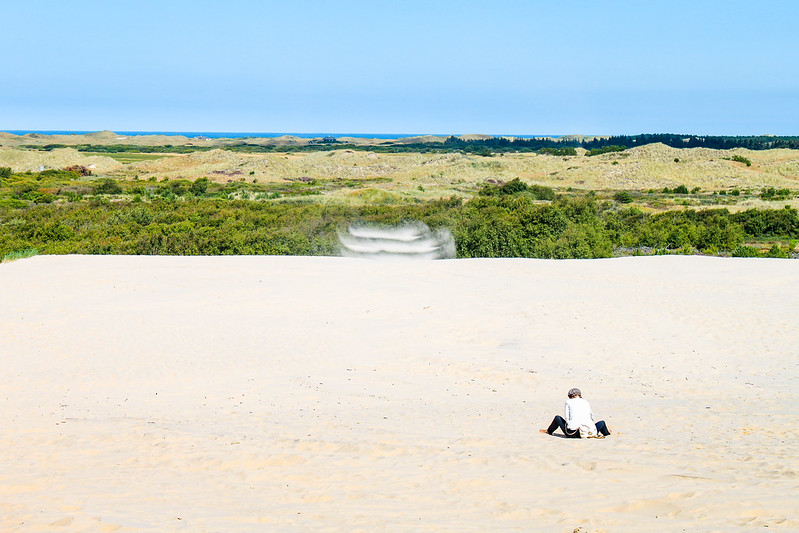 When I tell people that we have a desert in Denmark, they usually respond with a blank stare. A desert – in Denmark? Well actually, Råbjerg Mile is a migrating sand dune, but its desert-like nature cannot be compared to anything else in Denmark.

We have a lot of hidden gems in Denmark, and Råbjerg Mile (or ‘the Mile’ as we call it) is definitely one of them.

Read next: 12 mind-blowing places for nature in Denmark

Why you should visit Råbjerg Mile

Råbjerg Mile is located in Northern Jutland, my favourite area in Denmark.

North Jutland’s landscape is one of the most wild and beautiful in the country. White sand beaches, endless grass and sand dunes, and vast forests make up some of our most remarkable sceneries. North Jutland is also home to towering lighthouses, national parks and magnificent nature for those who prefer hiking trips and relaxing walks, rather than busy cities filled with car horns and lots of people.

A trip to Råbjerg Mile is not just a trip to the largest migrating dune in Denmark. You’ll also get to experience the most serene and areas of the country. And since Denmark is small, everything is within close distance.

Read next: 12 things to do in North Jutland, Denmark 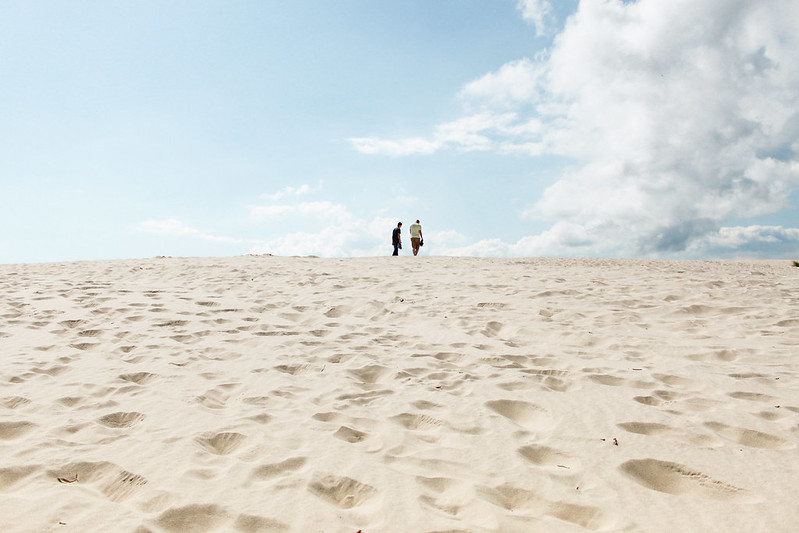 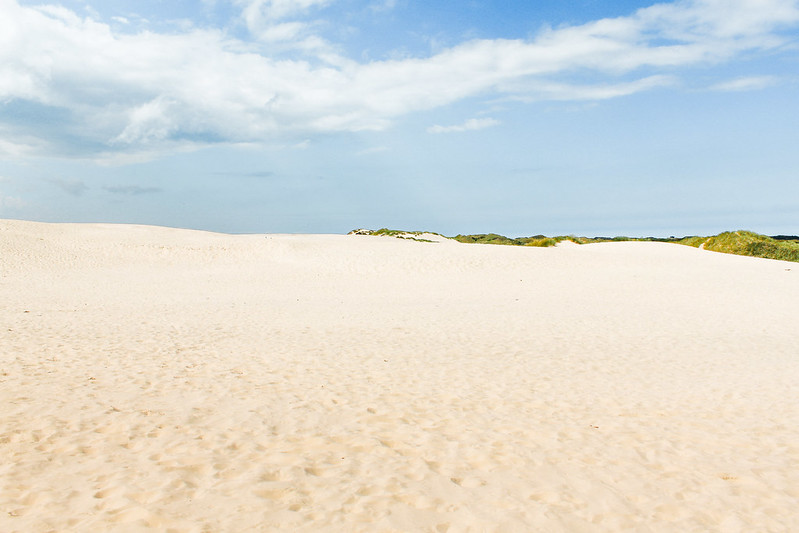 Råbjerg Mile has been around for centuries. It was formed on the west coast (Råbjerg Stene) in the 16th century during a great sand migration. Northern Jutland has struggled with migrating dunes for many centuries due to the harsh wind.

Skagen was affected by sand migration with entire areas being covered in sand and locals were forced to move after a relentless fight with the sand. The sand-covered church, just south of Skagen, is a standing proof as it was also swallowed by the sand.

While other nearby migrating sand dunes have been stopped –  for instance Rubjerg Knude to save the lighthouse from falling into the sea – the Danish government has purposefully left Råbjerg Mile in a migratory state. It’s moving northeast towards Kattegat at a rate of more than 15 m a year. It’s expected to cover the main road to Skagen in a century or two.

The sand dune consists of a 1000-m long and 1000-m wide mound with about 4 million m3 of sand. The highest point is 40 m above sea level and from the top you can see all the way to Skagen. 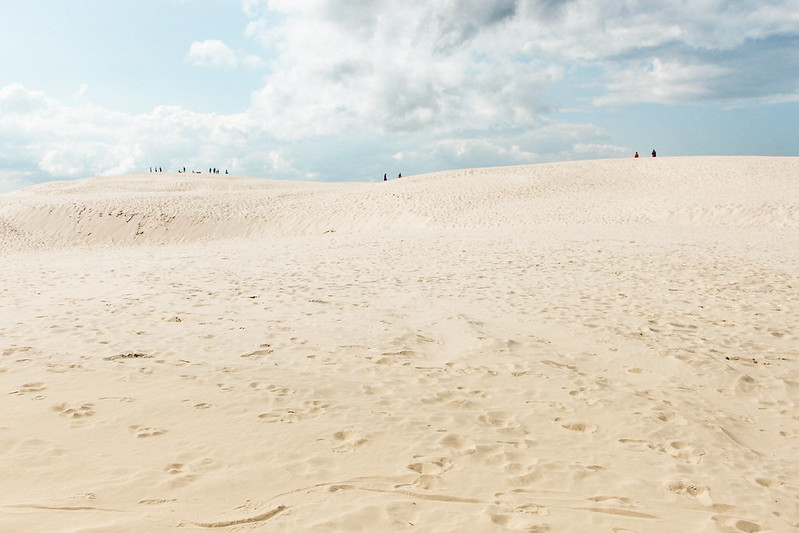 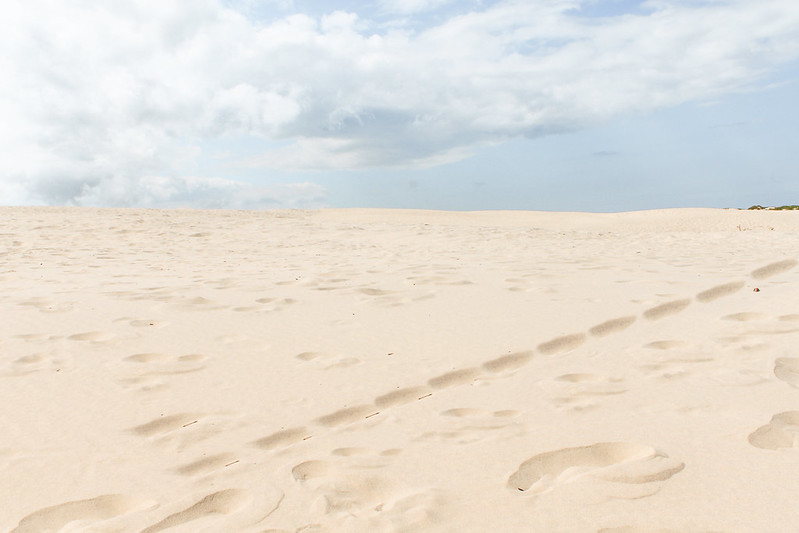 Råbjerg Mile is a fun place to experience for the whole family. Close by is the forest, but the landscape resembles a hilly desert where you can see the sand dance over the Mile. If you visit on a windy day, you can hear the wind howling and feel the sand blowing against your skin. 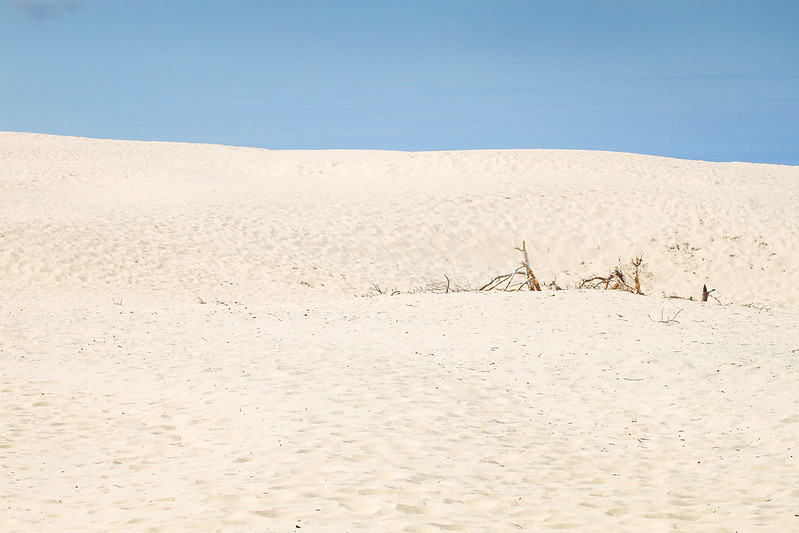 By car – Råbjerg Mile can be reached with car from Kandestedvej.

By bike – On bike, you can reach the sand mile from Vestkyststien (the westcoast route).

By foot – Råbjerg Mile can be reached by footpath from Råbjerg church. 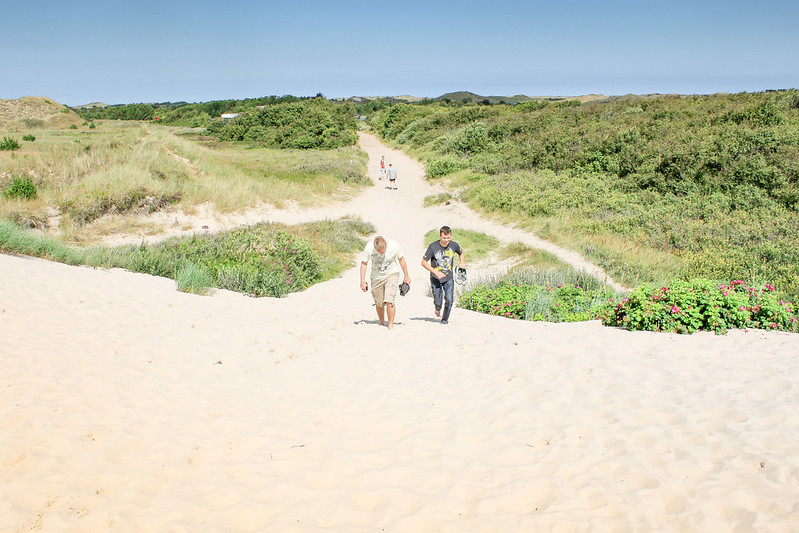 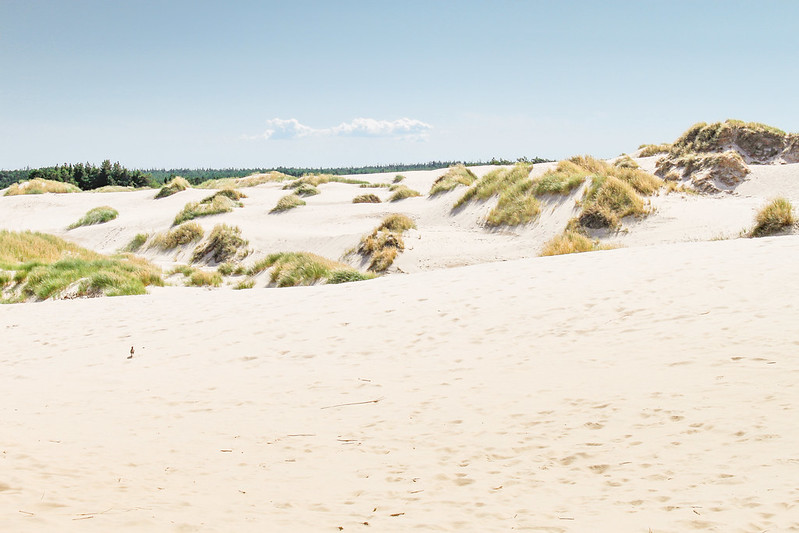 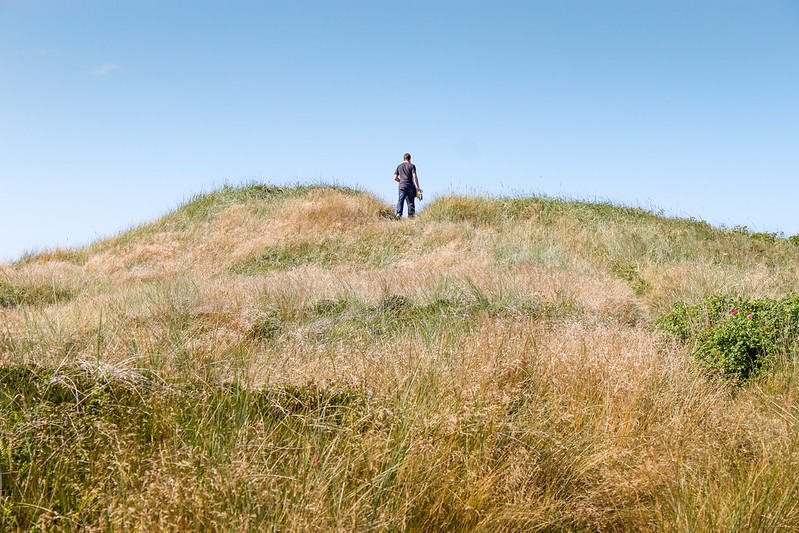 Where to stay near Råbjerg Mile

In the area around Denmark’s largest dune, you’ll find several places to stay. The most popular include Skagen hotels Ruths Hotel or Hotel Marie as well as some of the Denmark’s best campsites.

We’ve stayed at Skiveren Camping during most of my childhood summers and also these past few years since we got kids on our own. It’s an amazing place, just by the North Sea. 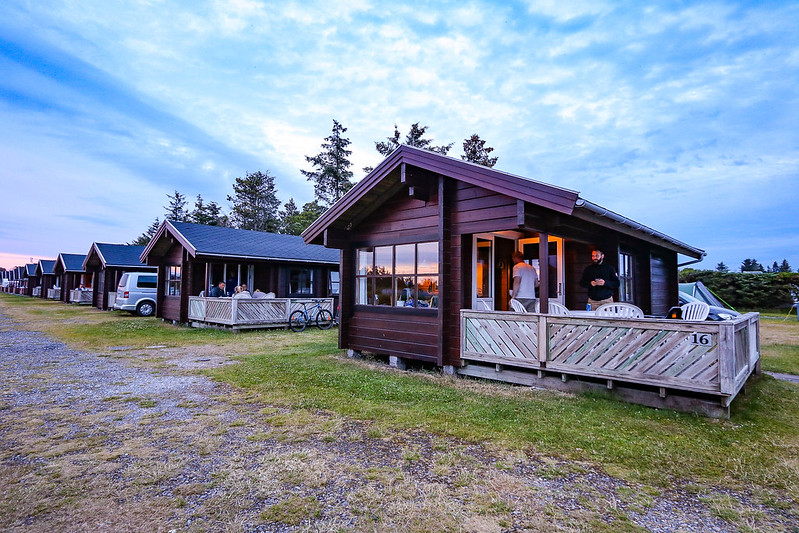 Other nearby sand dunes

Whether you plan to explore the area or just travel though, there are other nearby sand dunes worth a visit. Like the sand-covered church or Rubjerg Knude.

The sand-covered church was built in the 14th century, but around year 1600, sand began to bury the church faster than the townspeople could dug it out. By the late 1700s the door was almost completely covered and had to be dug out regularly just to hold services. The sand-covered church is free to visit and definitely worth a visit if you’re in the area. 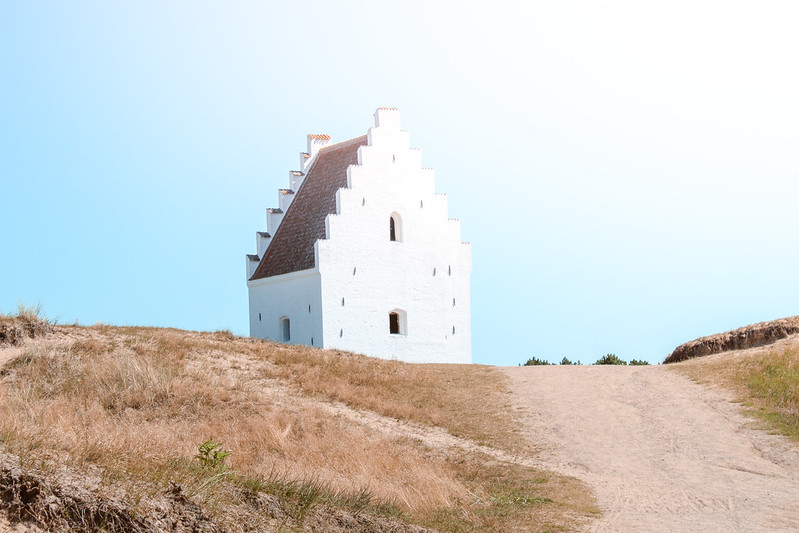 Rubjerg Knude lighthouse is 23 metres high, and when it was built in 1900 there were no large dunes around it. As time went by though, the migrating dunes shifted and brought the lighthouse alarmingly close to the cliff edge.

In 2019, the lighthouse was manually moved by the Danish government to prevent it from falling into the sea. It’s a must-visit if you’re in Northern Jutland.

Read next: How to plan a day trip to Rubjerg Knude 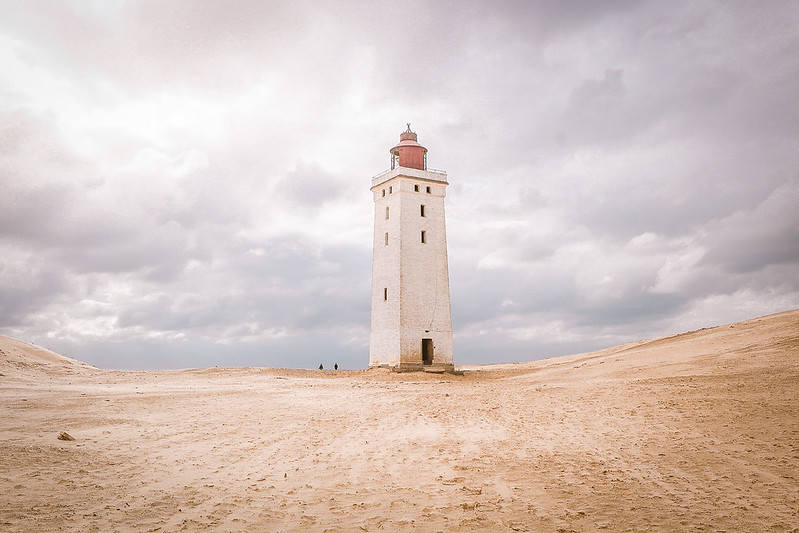 Going to Rabjerg Mile? Ask me anything in the comments