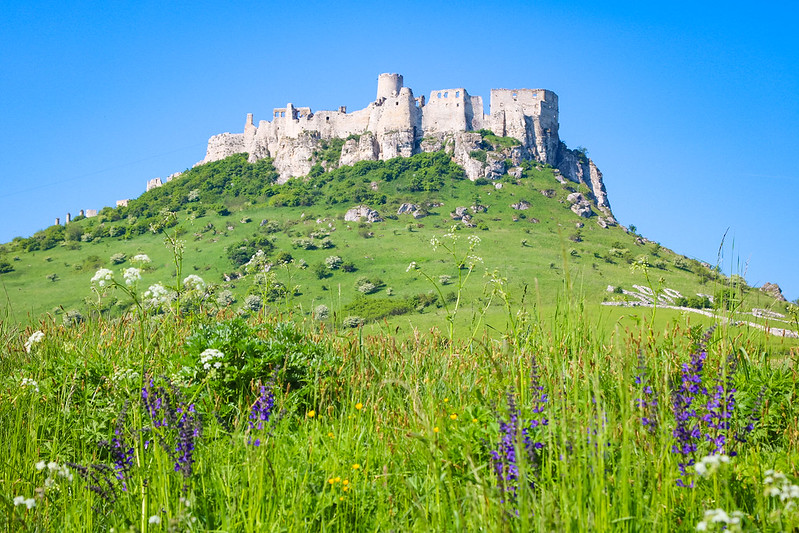 Spis castle Slovakia is one of the largest castle complexes in Europe, yet it stays under the radar for most travelers.

Although only a restored ruin and a museum remains, locals told me it still had a lot to offer. I decided to visit on my way from Kosice to the High Tatra mountains.

At 41,426 m2, Spis is the largest castle in Slovakia and one of the largest in Europe. Spis Castle, also known as Spissky castle and Spišský hrad in Slovak, started as a single tower in 1113. It was enlarged to protect the wealthy Spiš area, which was then part of the Hungarian empire.

In the span of the following 600 years it acquired its great size, and in that time it had several owners, including Hungarian kings, the Szápolyi family, the Thurzo family and the Csáky family. Since 1945 Spiš Castle is owned by Slovakia.

The castle was destroyed by a fire around 1780 and gradually fell into ruins until 1970. At present it has a museum, a tower and a torture dungeon, and movies like Dragonheart (1996) with Dennis Quaid and The Last Legion (2007) with Colin Firth and Ben Kingsley were filmed here.

In 1993, the castle became a designated UNESCO World Heritage Site. 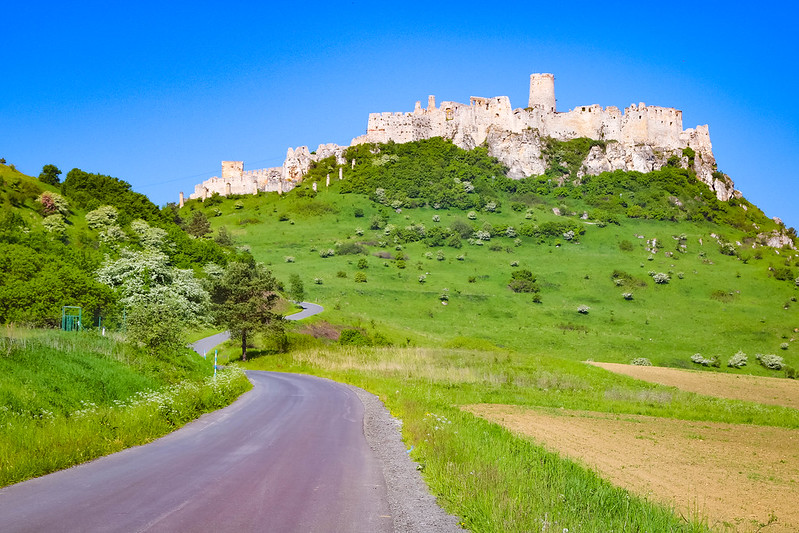 View from the main entrance road 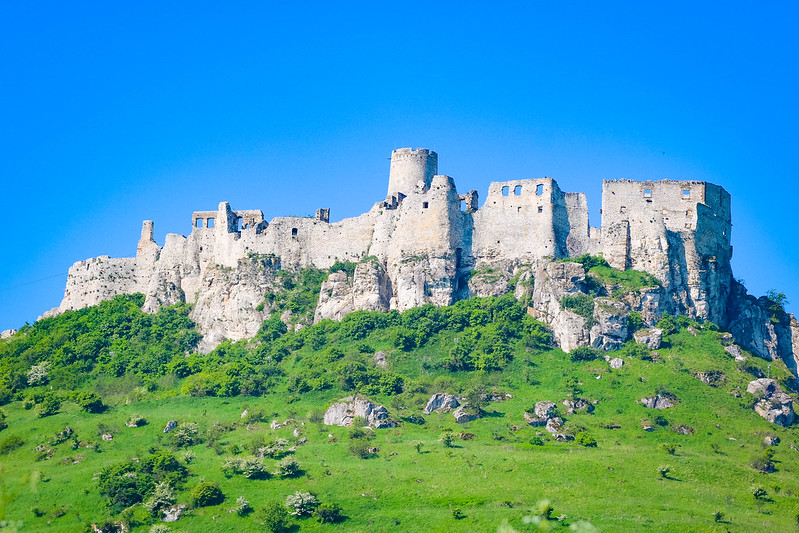 Where to find the best views

Spis castle is located on a hill which gives you a great view of the castle itself and the beautiful surroundings. On a clear day you can see all the way to the High Tatras.

From the tower
The Slovakia castle is towering beautiful from the village and it’s just as pretty from the top. I walked around the castle and got some pretty sweet views from the enormous window sections, but the best view was from the tower. You can almost imagine the castle lords scouting for enemies, whom could be spotted many miles away.

If you climb the tower, expect poor lightning and a lot of steep walking on uneven surfaces. In return you’ll get outstanding views of the castle grounds and the countryside.

Drive around the castle
Before driving up to the castle, I drove around it to take pictures from all angles. I really recommend it as the views change. 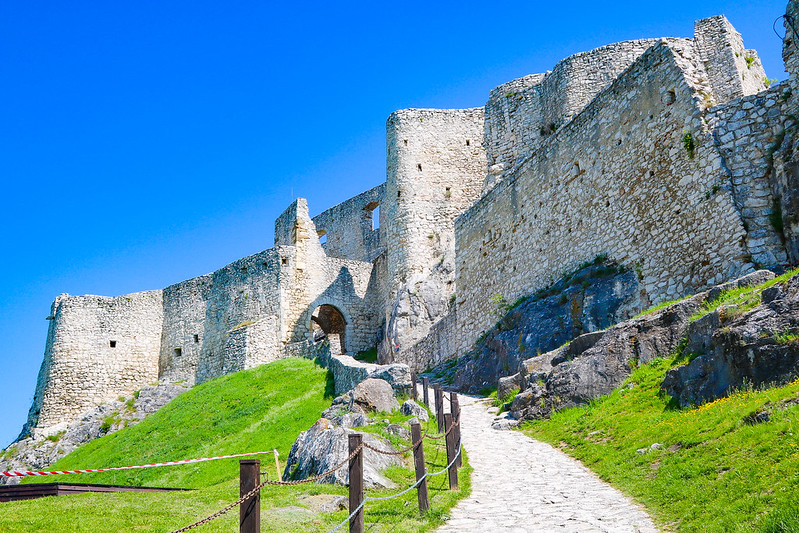 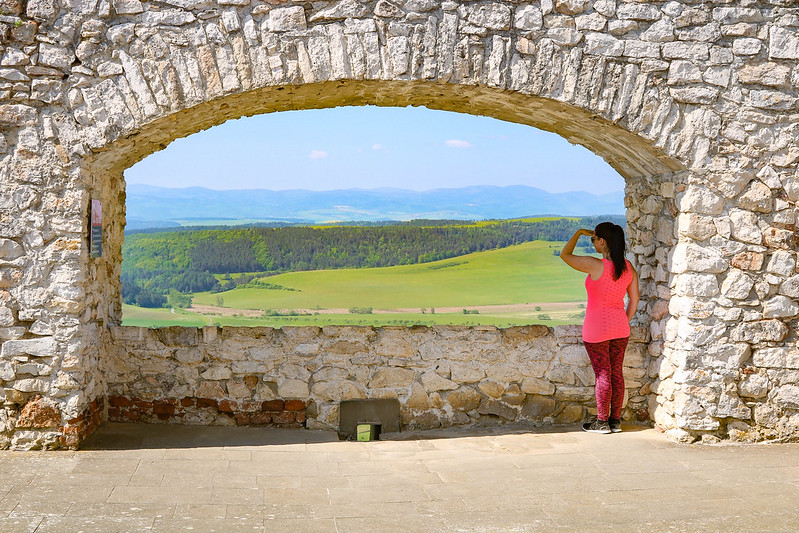 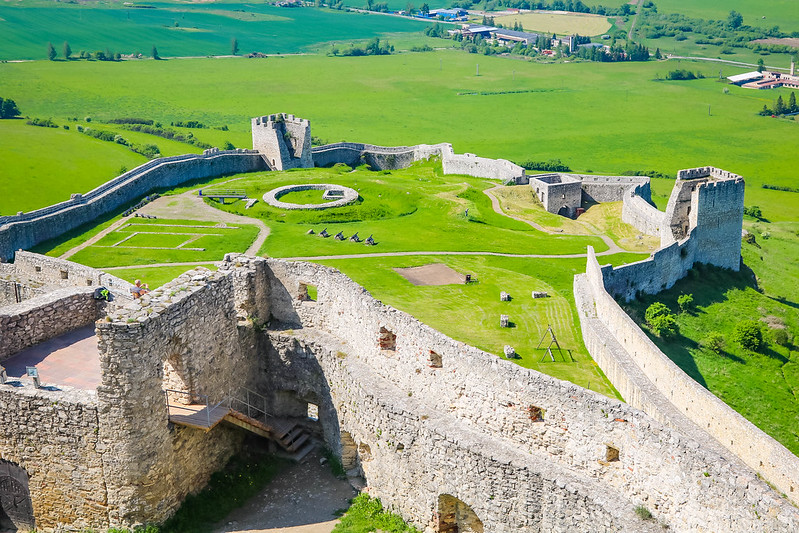 Panoramic view from the tower 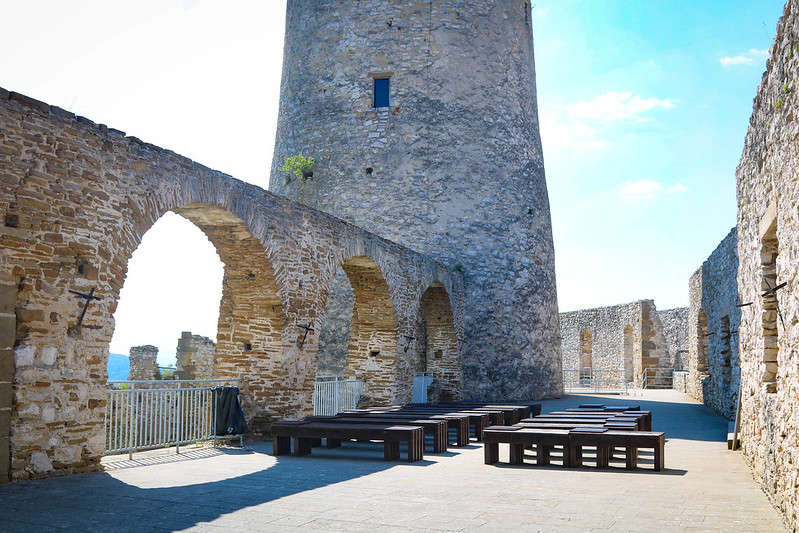 And this is the tower 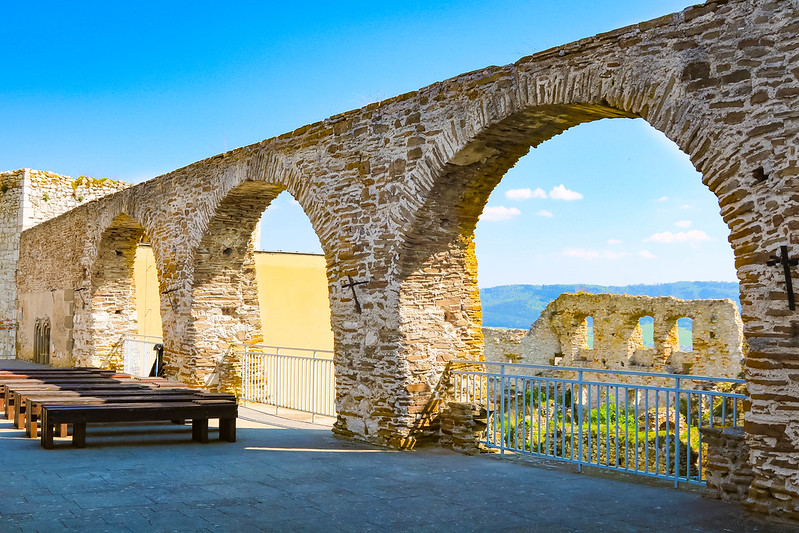 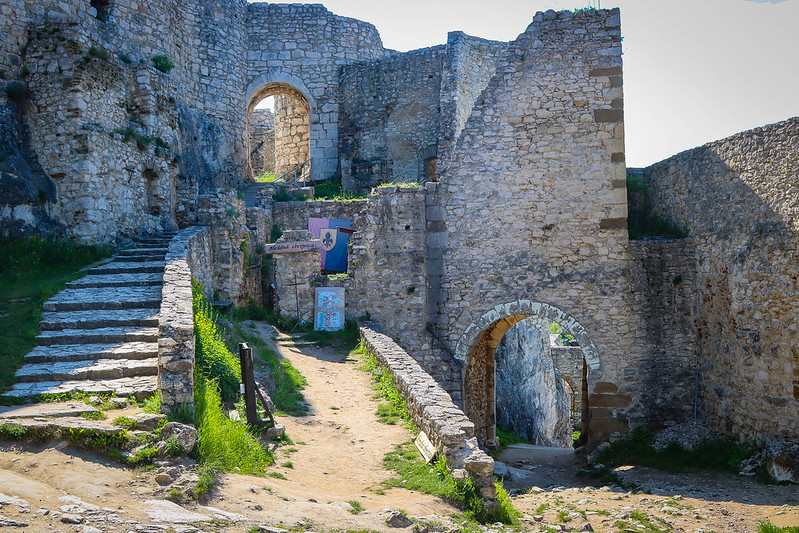 Like any other self-respecting castle, Spis castle also has a torture chamber, and a quite inventive one I might add. I got the opportunity to tour the castle and see firsthand the torture devices still inside.

From excruciating medieval weapons to an entire room filled with bona fide instruments of torture, it’s not difficult to imagine what went on here. Prisoners could be left for days in this room, with no one to hear them scream but the cold stone walls.

I mean this in all seriousness; people of the Middle Ages were alarmingly creative. How do you come up with making The Wheel for example? This torture device had the prisoner strapped to a wheel and slowly turned over a fire. The few moments of relief at the top of the turn gave him (or her) a chance to confess their crimes before the wheel brought them back over the scorching flames.

I didn’t see this particular device at Spis castle, but it made me wonder. You had to be a sadist or someone who laughs at horrible things to invent and use torture instruments like these. 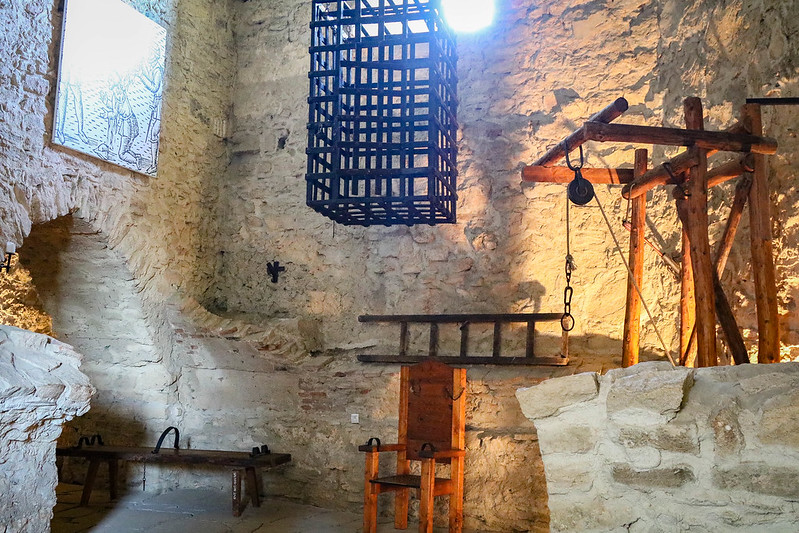 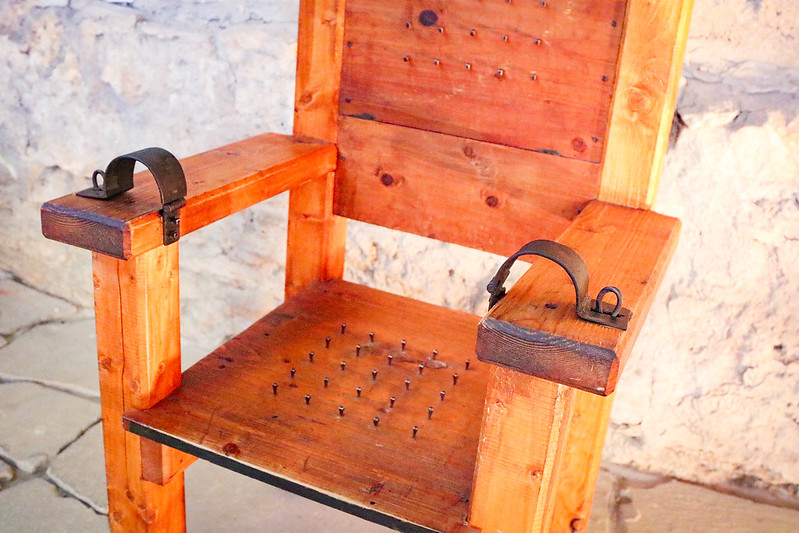 After the dungeon, I went to the castle’s chapel, St. Elisabeth, which is very small with tall, arched windows.

In the castle museum is also a replica of a bedroom with a bed, chair and what looks like a medieval preacher chair. I particularly liked the dragon figures on the bed; a symbol I’ve seen a lot in Slovenia and Romania.

I liked the museum, and it did its job by showing how life was in the Middle Ages. Although Spis castle largely is a ruin, you still get an idea of what it looked like and how life was back in the day. 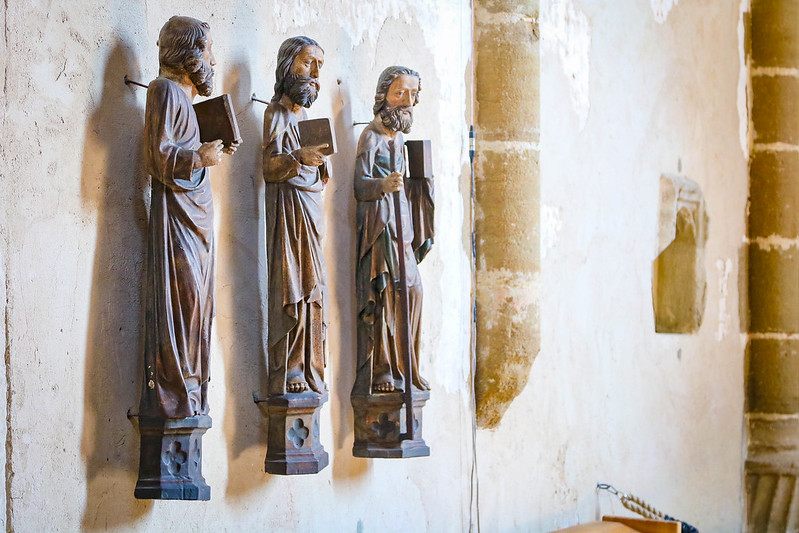 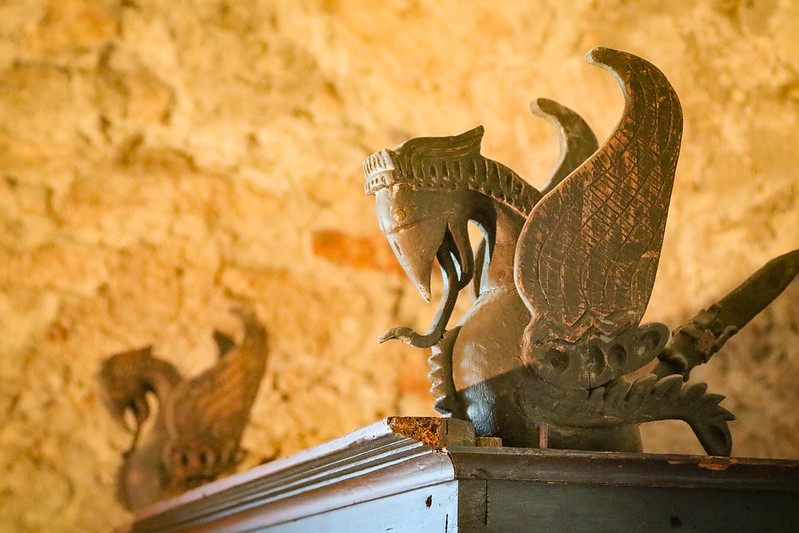 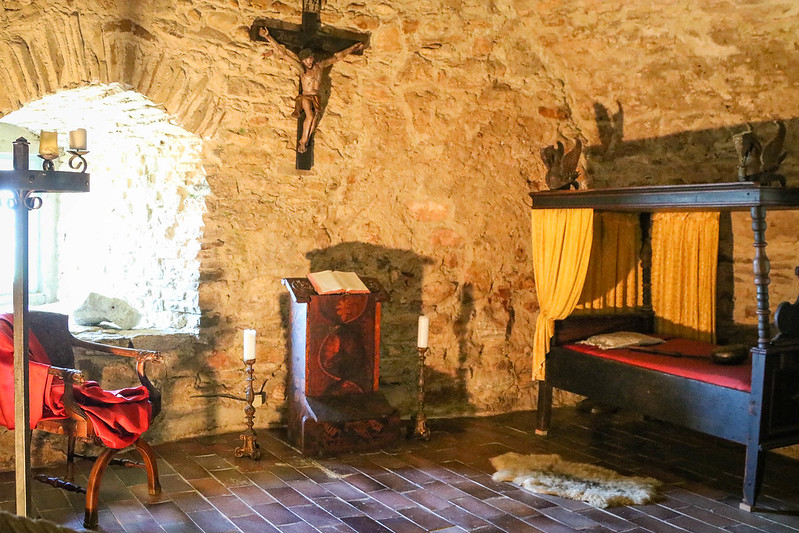 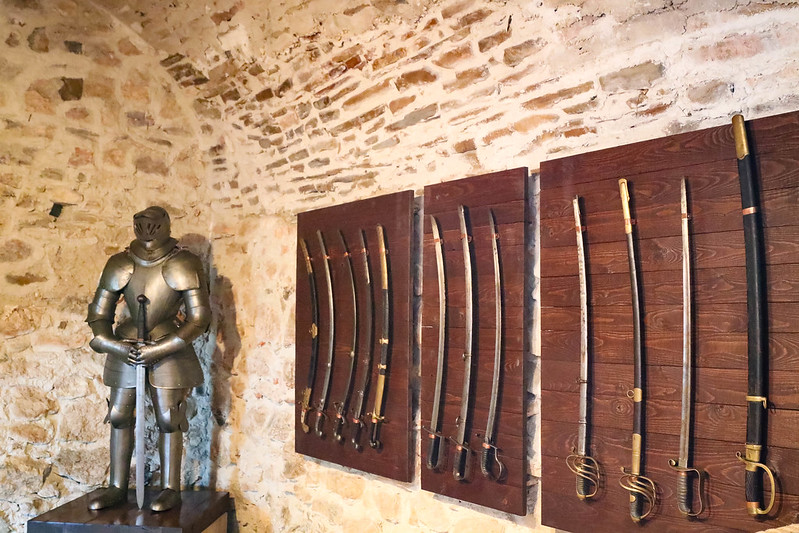 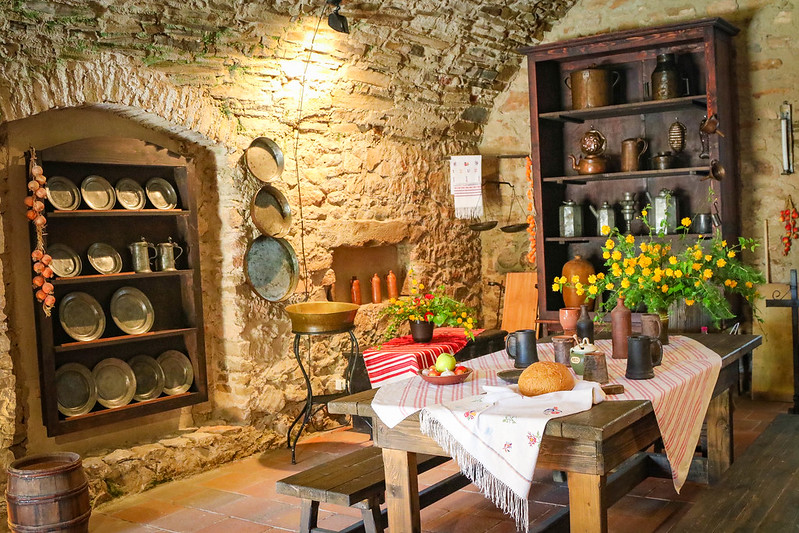 Another UNESCO site nearby is Spišska Kapitula. A walled city from 1245, known as the Slovak Vatican.

The small, medieval town consists of St. Martin’s Cathedral, a former monastery, and a single street. It’s not as impressive as Spis Castle, but it’s worth a visit when you’re in the area.

Pro tip: From the lower gate, walk a little further to get a beautiful and extensive view of Spišska Kapitula and Spis castle in the background ↓ 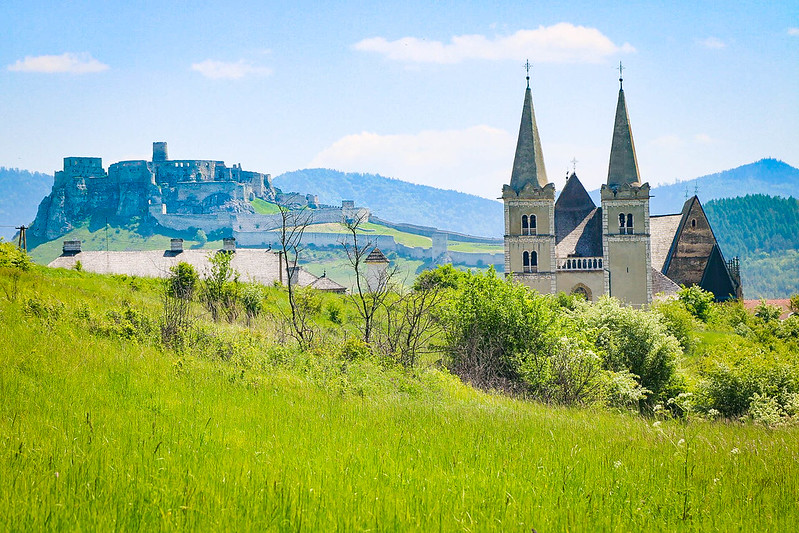 How to get to Spis Castle

Spis Castle is located in the town of Spišské Podhradie. You can reach Spis Castle by car, bus and train. Just be aware that several towns in the the area begin with Spis, which can seem confusing.

By car: The castle is 5-10 minutes from the parking lot.

By bus:  Take a direct bus from Kosice (1.45 hour) or Poprad (55 min). Find bus schedules here: www.cp.sk. If you arrive by bus, you can walk from the village Spišské Podhradie. It’s up a good slope and takes about an hour.

By train: There are no direct trains from Kosice, Poprad or Bratislava. But Spišské Podhradie does have a train station. Find train schedules here: www.cp.sk 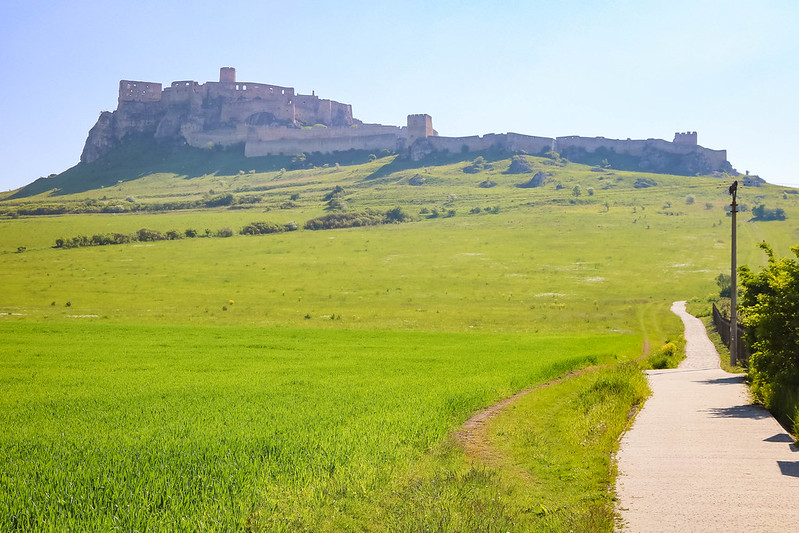 View from the village Spišské Podhradie 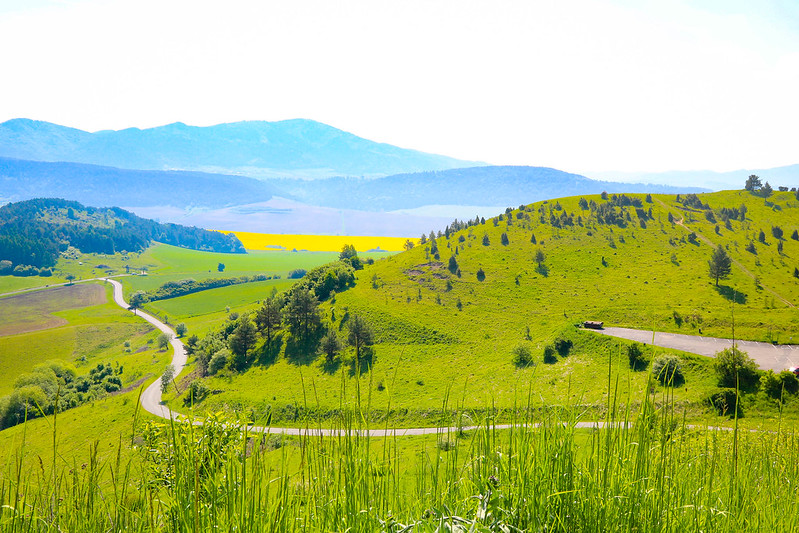 A thousand thanks to Martin from Kosice Region Turizmus for showing me around Kosice Region. I was a guest, but all opinions are my own as always.

So, what do you think about Spis castle? 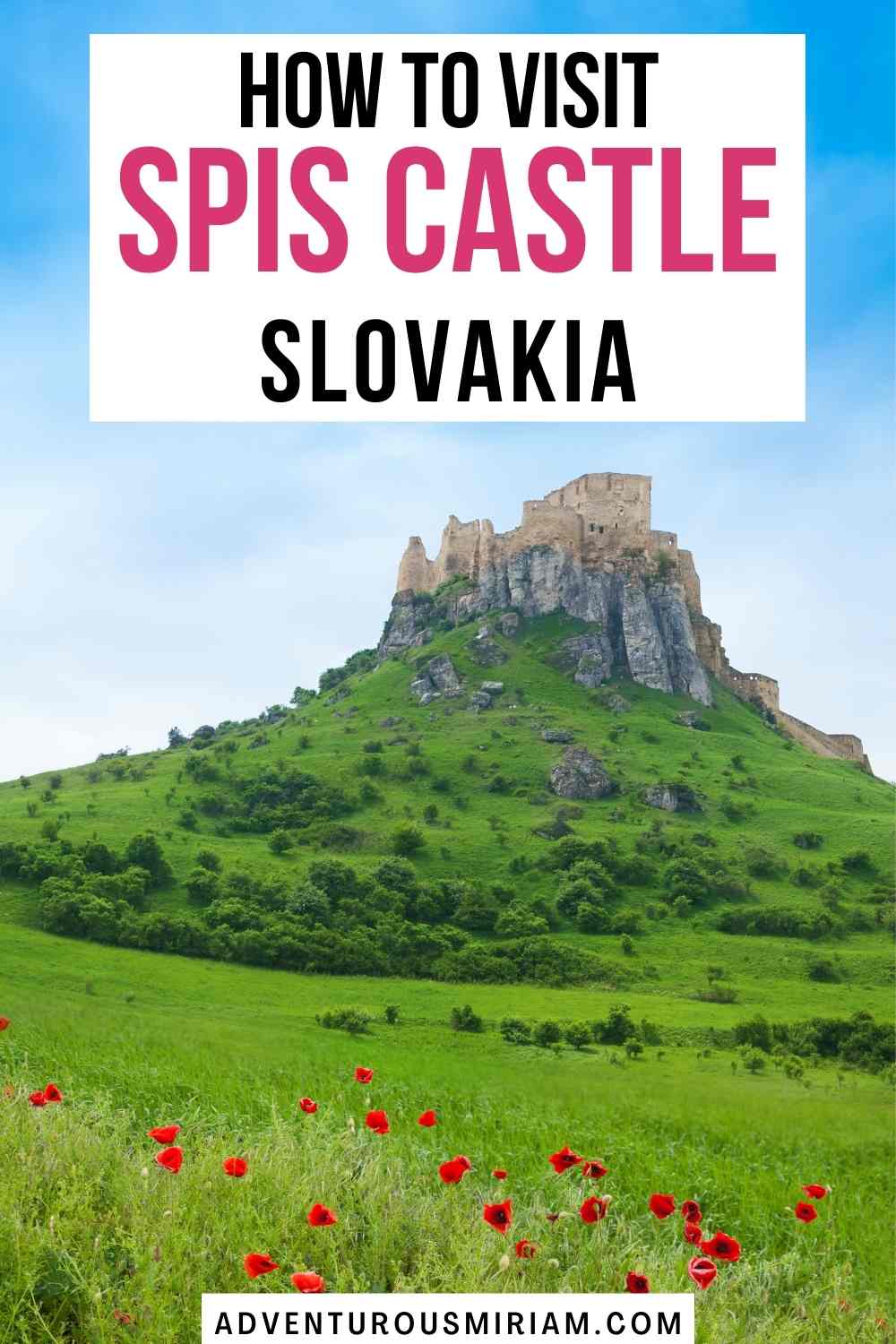 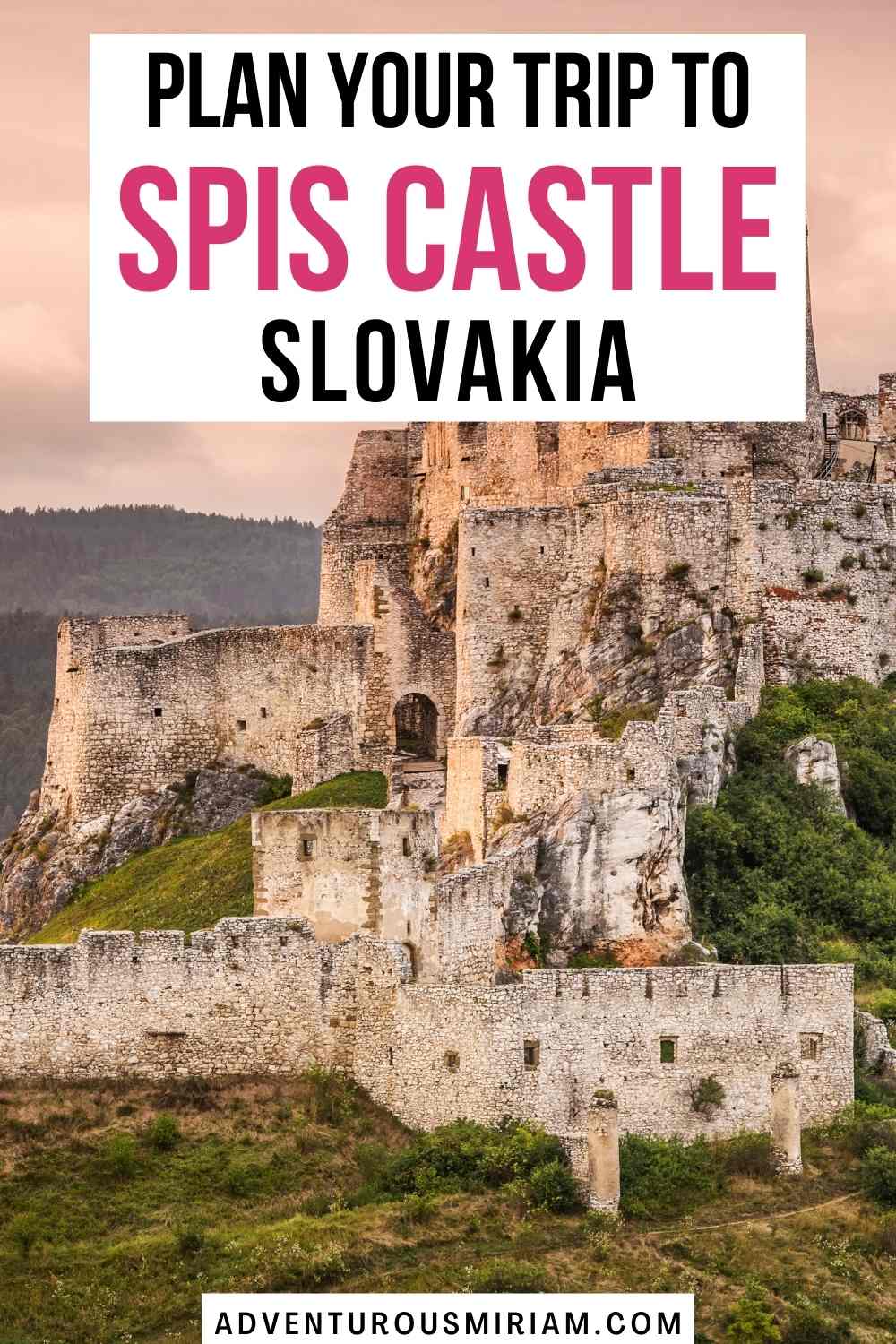