Long, long before I even planned this trip, I heard about a charming Andalusian town in the mountains with a major Arabian palace, orange-filled avenues and cheap tapas. The town was Granada and I kept it on my radar until the time was right for a visit.

Well, this summer I finally got around to visiting Spain for the first time, and I knew I had to put Granada on my Spain road trip itinerary.

Keep reading for the best things to do in Granada Spain. 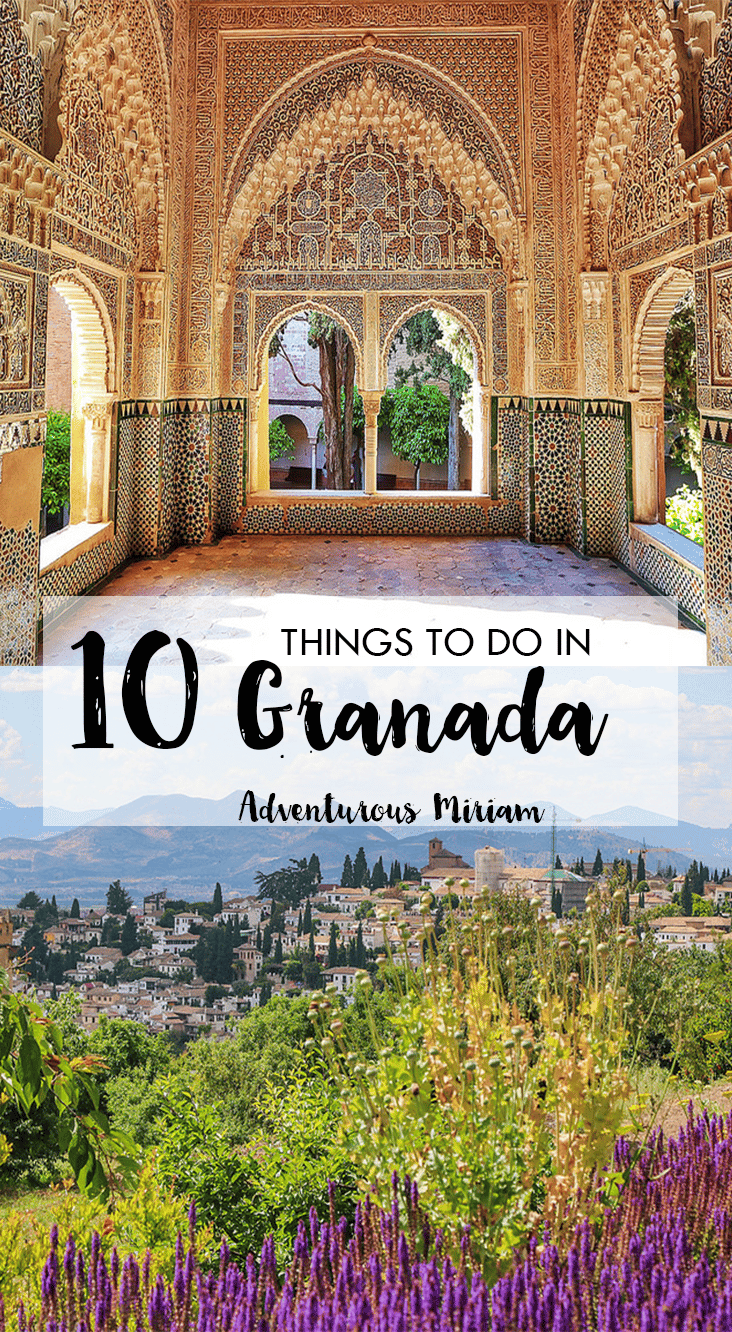 Things to do in Granada, Spain

Granada is located in Andalusia, the south of Spain. Most people visiting this region come through Malaga, and guess what – Granada is only 1,5 hours drive away. You can easily combine it with a trip to Costa del Sol, which would balance out a seaside vacation really well.

Okay, so Granada has a lot to offer on several fronts. First and foremost, it’s home to the majestic Alhambra palace, which I’ll get to in a minute. But it’s also a great place to unwind and relax. Since it’s located in the mountains, you get that fresh mountain air not to mention the views!

The best way to explore the best things to do in Granada is by getting a Granada card. This will allow you to enter the main attractions easily, and you can even use it for public transportation. You can’t use it for the Alhambra, though. Visiting the Alhambra requires a separate ticket booked in advance, read all about it here.

The sweet smell of oranges is everywhere in Granada

And of course the Alhambra

Alhambra is the one thing you cannot miss on a trip to Granada. And at the same time it’s also reason enough to even visit the town – it’s that beautiful.

I’ve already written a separate post about how amazing Alhambra is and how to plan your trip there, so I’ll keep it short, guys. The Alhambra is an Islamic fortress from the 9th century, overlooking the snowcapped mountains and city of Granada. It has numerous ruins, gardens, rooms and pools, with the highlight being the Nasrid Palace.

You should schedule at least four hours for a trip to Alhambra.

The Court of Myrtles in Nashrid palace

Granada Cathedral (from 1523) is right in the heart of Granada, and if you’re fascinated by Spanish history, this is a must see.

Two things set it apart: For starters, it’s the first Renaissance cathedral in Spain whereas the others built during this period are Gothic. And second, two of the most notable historical figures from Spain, Queen Isabella I of Castile and King Ferdinand II of Aragon, are buried next door in the Royal Chapel.

The Alcaiceria has been the grand marked in Granada since the 15th century, although the original marked burned down in the 19th century. You can buy souvenirs here or just soak up the vibrant colours and spices. Either way it’s worth a visit.

3. The maze-like streets of the Albaycin

The Alhambra is super beautiful from the inside, but it’s also quite magnificent seen from afar (see the above photo of the Alhambra). The best place to see the palace is Mirador de San Nicolás, which is located in the Albaycin. This part of Granada is hilly with narrow, winding streets and it’s a beautiful place to roam around – you never know what you mind find.

Granada Cathedral was by all means impressive, but somehow I connected more with the Monastery of St. Jerome. Maybe because this felt more authentic and current in a way. For instance, a nun greets you when you enter and you see them walking peacefully around the convent. And it’s not crowded, and that’s always a plus in my book.

The chapel is really one of a kind, just see the photos below.

Corral del Carbon de Granada built in the 14th century is the oldest monument of Muslim Granada. The cobbled courtyard is surrounded by two storeys of brick galleries and was originally a warehouse of goods. Later, it was used as an inn for coal dealers, hence its name, Coal Yard.

Ever heard of a hammam? Well, if you like massages, warm baths and wellness, you’re in for a treat. A hammam is an Arab bath – a hot steam bath followed by a massage. One of the most popular hammams in Granada is Hammam Al Ándalus, which also offers a mesmerizing Arabian decor while you’re sipping mint tea.

Carrera del Darro is one of the most scenic walks in Granada, and should not be confused with the Acera del Darro (or Corral del Carbon for that matter). As a non-Spanish speaker these names sound confusingly similar in my ears 🙂

It’s crossed by two brick and stone bridges, and the streets date back to the 17th century. Follow the Carrera del Darro and you’re in for a picturesque stroll.

Tapas is king in Granada because here, you get FREE tapas whenever you order a glass of wine. How excellent is that?

In Denmark, tapas are small snacks. And by small I mean stuffed olives or a petite plate of bacon-wrapped dates (omg, this is so good!!). However in the land of tapas, a single tapa can equal half a dish (media ración) or a whole one (ración). Like here ↓ I ordered spicy chicken with fries and some sauce, and I still had three more dishes to go.

So be warned that tapas in Spain vary in size before you go ahead and order four of them like yours truly *face palm*.

Andalusia equals flamenco, right? Yes. And in Granada you have plenty of options for experiencing authentic and passionate flamenco dance. Even if you don’t understand the difference between a buleria and a fandango, it’s a good place to enjoy the music and experience the emotional performance up close and personal.

You can find recommendations for flamenco shows in this article.

If you have a day or a half to spare and feel like stretching your legs, you could go hiking in Sierra Nevada. Just take the bus to Monachil (25 minutes) to reach the Hanging Bridges of Los Cahorros and a waterfall.

How much time to spend in Granada

We budgeted two days in Granada, which was enough to see all the sights in this post. I’d say 2-3 days is ideal because it gives you time to explore, relax and eat tapas aplenty.

There are numerous hotels and apartments to choose from in Granada. Here are a few of the best ones:

Many thanks to Granada Tourist Office for supplying me with a Granada card. As always, all opinions are my own.

Heading to Granada? Let me know in the comments below if you have questions.

Psst! This post probably contains affiliate links, which means I earn a commission (at no extra cost to you) if you click through and make a purchase. As always, I only recommend products and services I trust.
By Miriam|2019-06-25T22:04:49+02:00October 16th, 2018|Tags: Spain|9 Comments