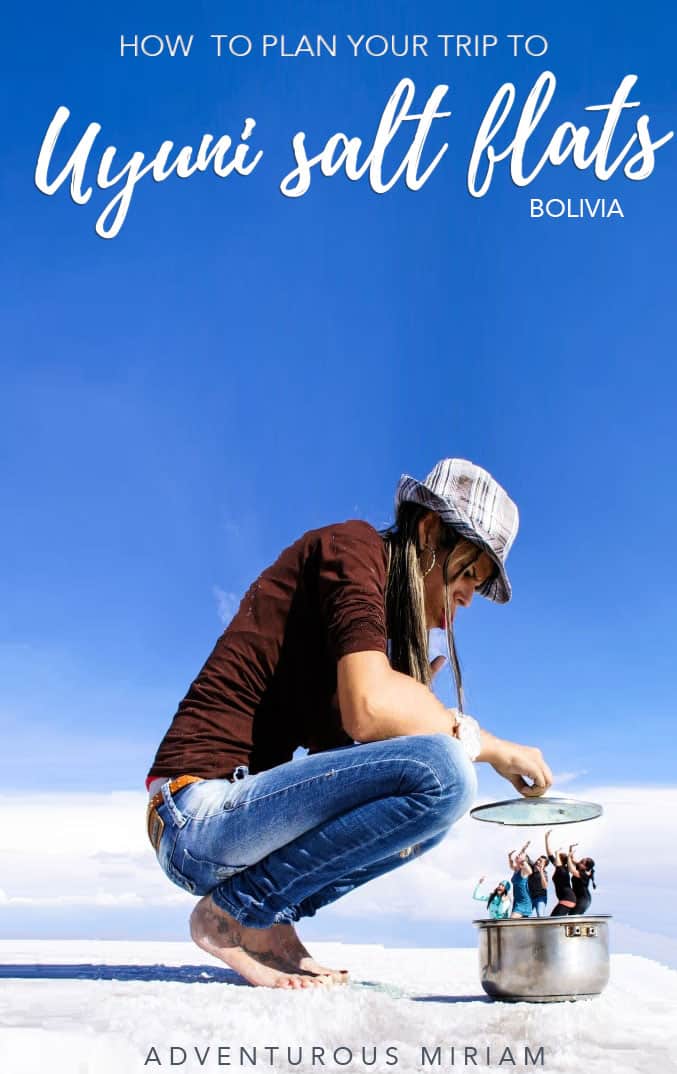 At 12,000 square kilometers, Salar de Uyuni is the largest salt flat in the world. Driving across it when the bright blue skies contrast with the blinding-white salt crust is one of the weirdest and most fantastic experiences I’ve ever had. I have to say – Uyuni exceeded my expectations both in regards to scenery and the tour company itself. I’ve never seen anything like this in my life, and I still get goose bumps every time I look at the pictures from this place.

In this post, I’ll share all the info you need for planning a trip to Bolivia’s salt flats, including a packing list, which tour company to go with and inspiration for funny salt flats pictures. Let’s dig in.

Salar de Uyuni, Bolivia offers a variety of tours ranging from one to four days. In one day, you will see the salt flats and be able to snap those famous funny pictures. In two days, you can visit the salt flats, see flamingos and nearby lagunas. I did the 3-day tour, which took us across 12,000 square kilometres packed with volcanos, red, green and white lakes, strange rock formations and a landscape similar to Mars. If you have the time, I would definitely recommend the three-day tour.

Read about it here: Road trip in Uyuni. This place is unbelievable.

We booked it 1,5 month in advance, but that’s just because I’m an obsessive planner. I know a lot of travelers book the tour on the day they arrive, but chances are that your numbero uno tour operator doesn’t have any space left. If you book the tour 2-4 weeks in advance, you should be fine.

WHAT DOES IT COST?

During my research of Uyuni tour companies, I read many horrifying stories about drunk drivers and people going hungry for days, so I was kinda on edge to find a decent company. As I discovered, some of the most popular companies are: Cordillera Tours, Red Planet and Quechua Connections.

We chose Quechua Connections, partly because of the good reviews on Tripadvisor and also because it’s a family-run company. I had a good feeling about them, and my intuition was right. I have nothing but praises to give this tour operator. They cost the same as everyone else, and José (the owner) makes the tour so much more fun. He speaks excellent English, knows all the good places, has great ideas for photos, and he’s a good cook! He even took us to his favorite place to see llamas, which was not on the itinerary.

You can contact José at this email address: [email protected] 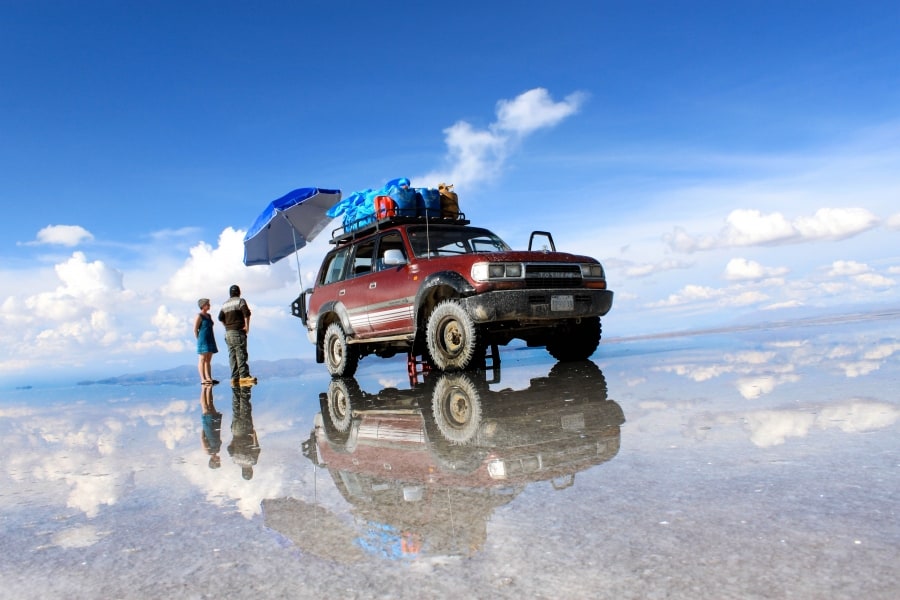 We got to Uyuni at 7.15 in the morning after a one hour flight from La Paz. As we arrived at the Quechua Connections office, I was instantly greeted by José; the owner of this family-run business, and his lovely family. He had been doing these tours for 14 years.

The Salar de Uyuni tour started at 11, which gave us a few hours to have breakfast and buy supplies. After picking up the rest of the group – three Bolivian cousins and an American – we headed for the cactus valley. This place was only a few kilometres from the town and it consisted of a large plantation of cactus plants bearing delicious fruits. 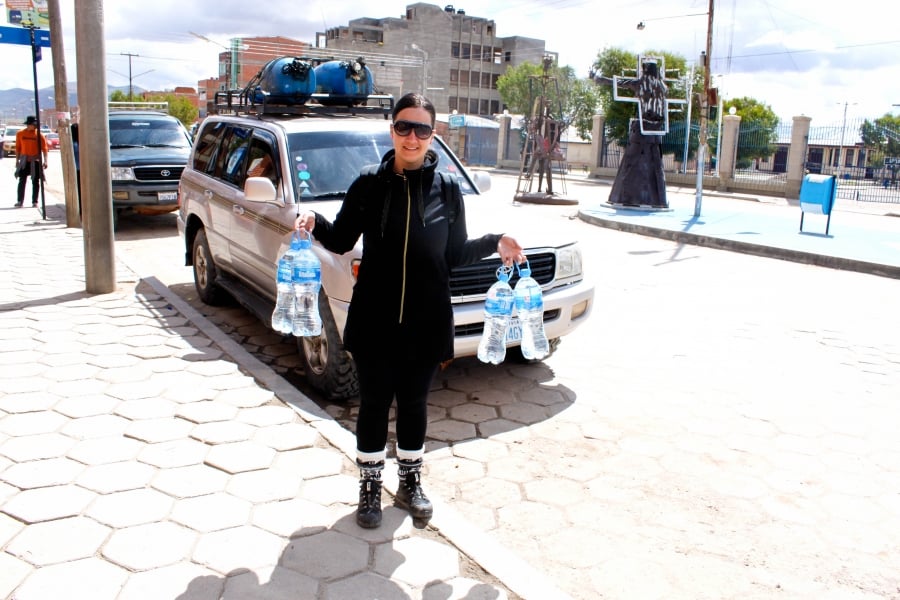 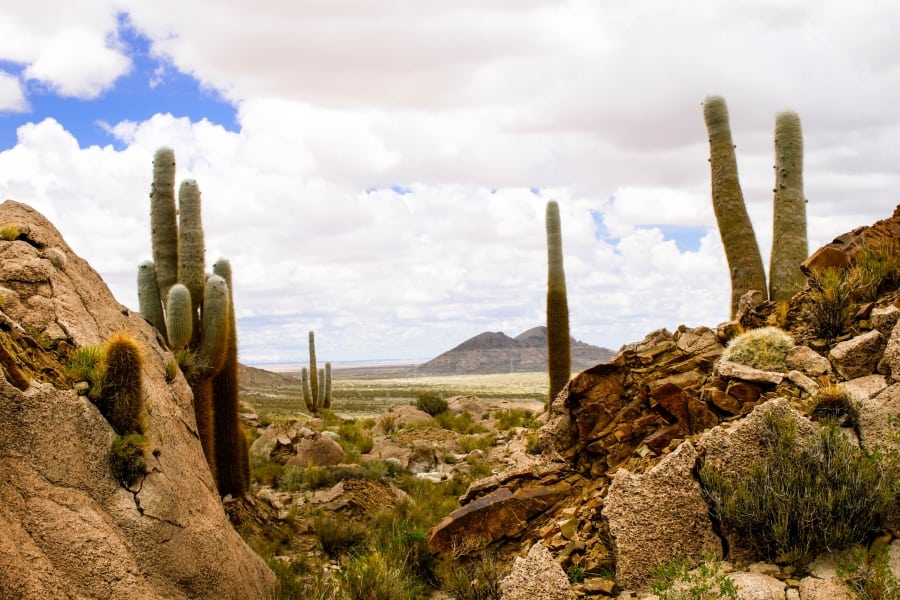 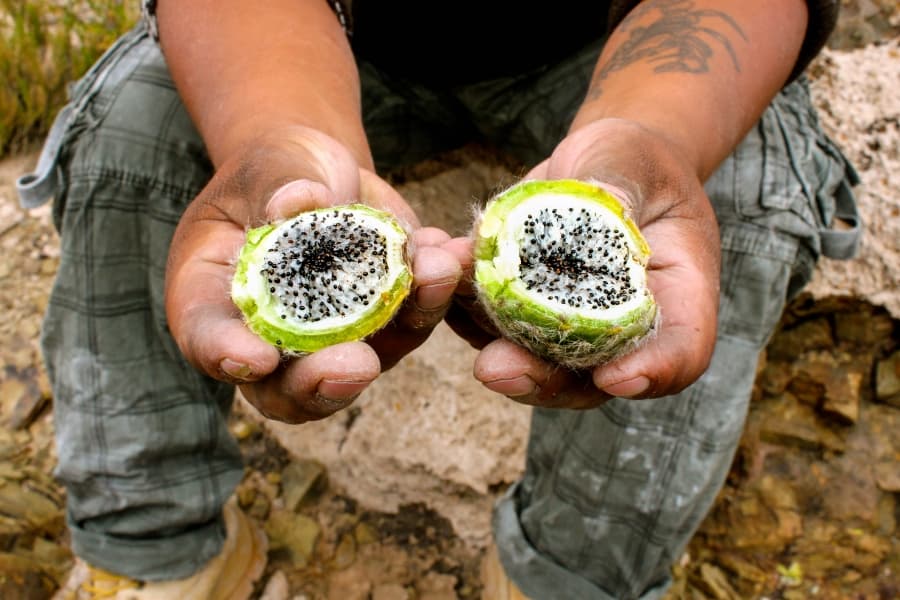 Next on the program was the train graveyard; a semi large collection of trains and carriages just outside of Uyuni town. These trains were used by mining companies to transport minerals all the way to the shores of the Pacific Ocean up until the 1940s. When the industry collapsed, it left behind the trains that can be seen today. 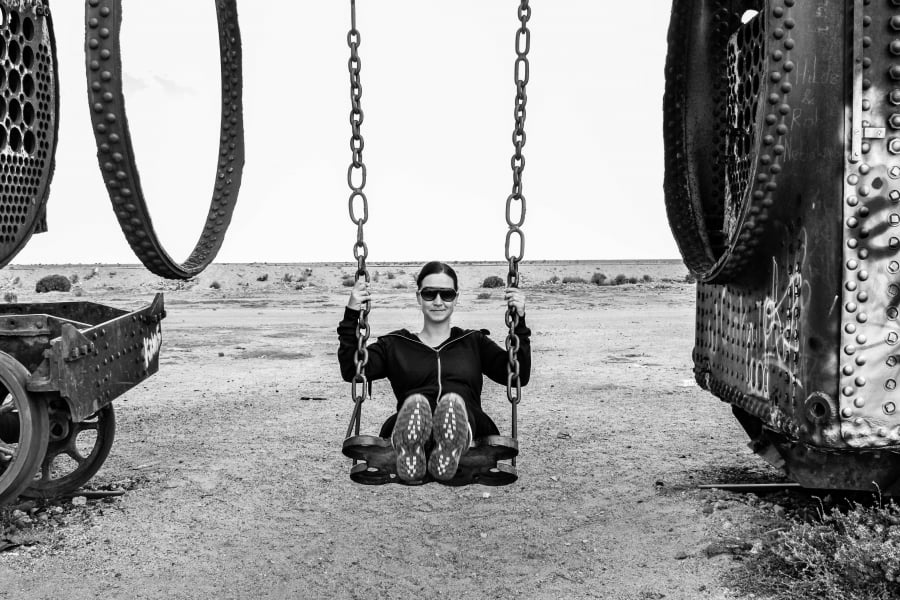 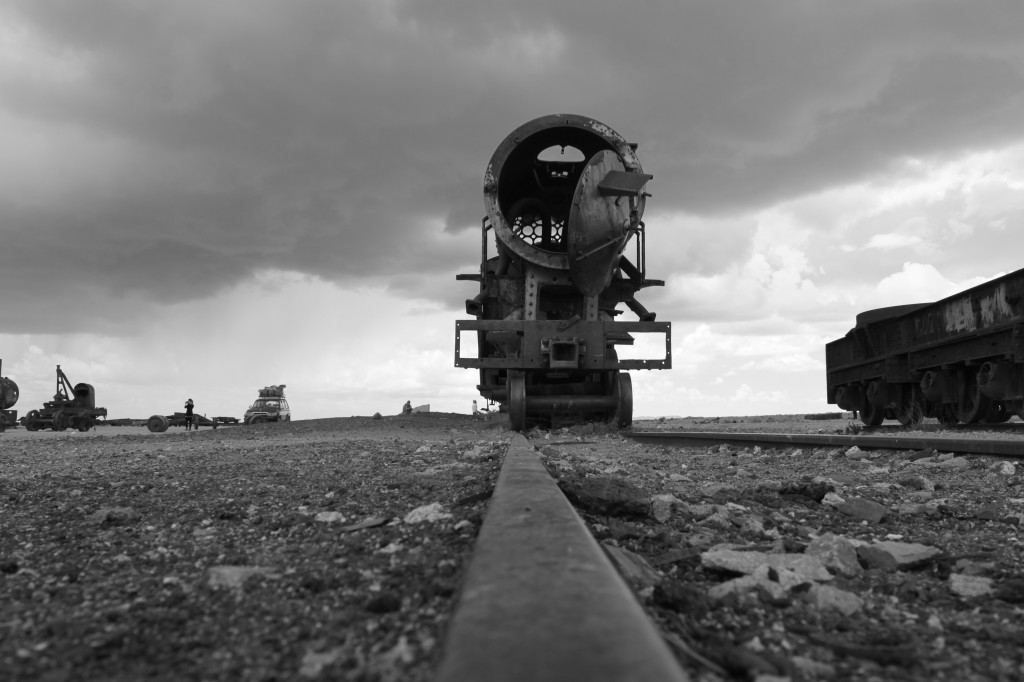 We then drove 30 minutes to the salt flat – Salar de Uyuni. This magnificent place, standing at 3,600 meter above sea level, was formed thousands of years ago when a large prehistoric lake dried out and left behind this major salt desert. In the middle of the flats, there is an island of giant cacti that measure up to 12 meters high and are over a thousand years old.

Apart from being an interesting place, this is also popular for snapping funny perspective pictures. Like doing yoga on a box of Toblerone, having your friend stand on your hand or cooking the team for dinner.

After spending a few hours snapping salt pictures and having lunch, we drove further out in the flats. The further we got, the more water was on the surface and this made for a perfect picture setting.

Below, you’ll find some of the best Uyuni funny pictures I took, including tips for taking your own. 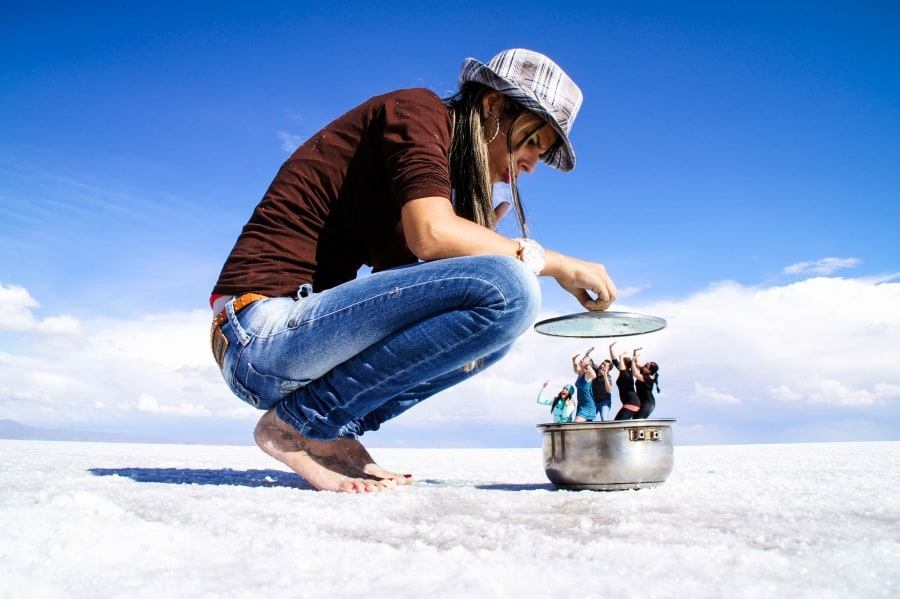 HOW TO TAKE THE BEST PHOTOS OF SALAR DE UYUNI

Taking the funny pictures was the thing we’d been looking most forward to that day. While José had some pretty creative ideas, we had done our research from home and brought some props. 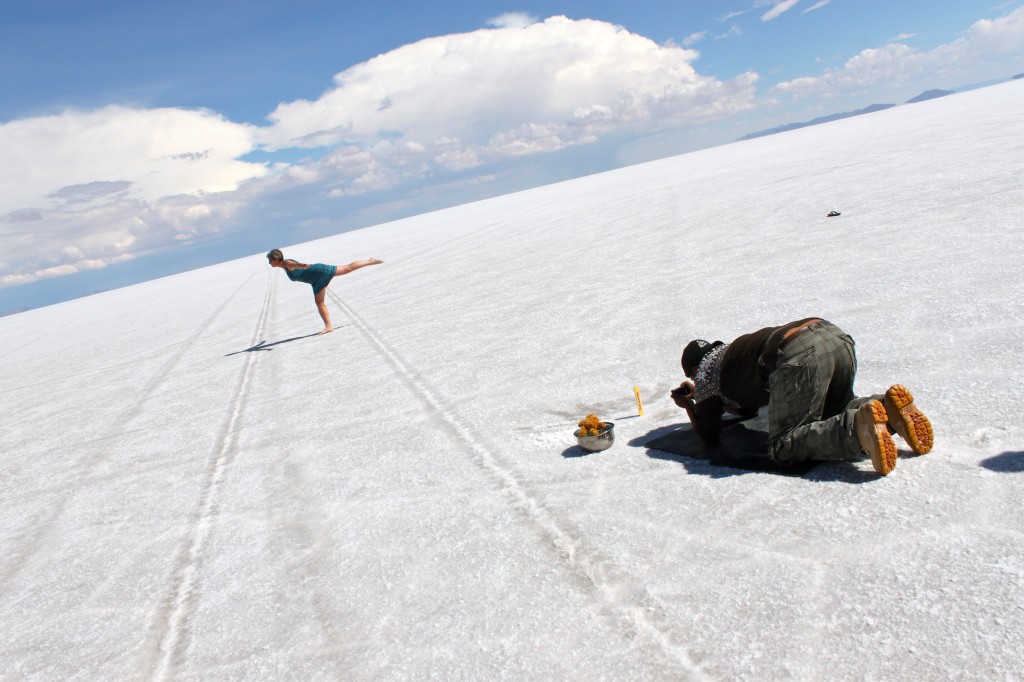 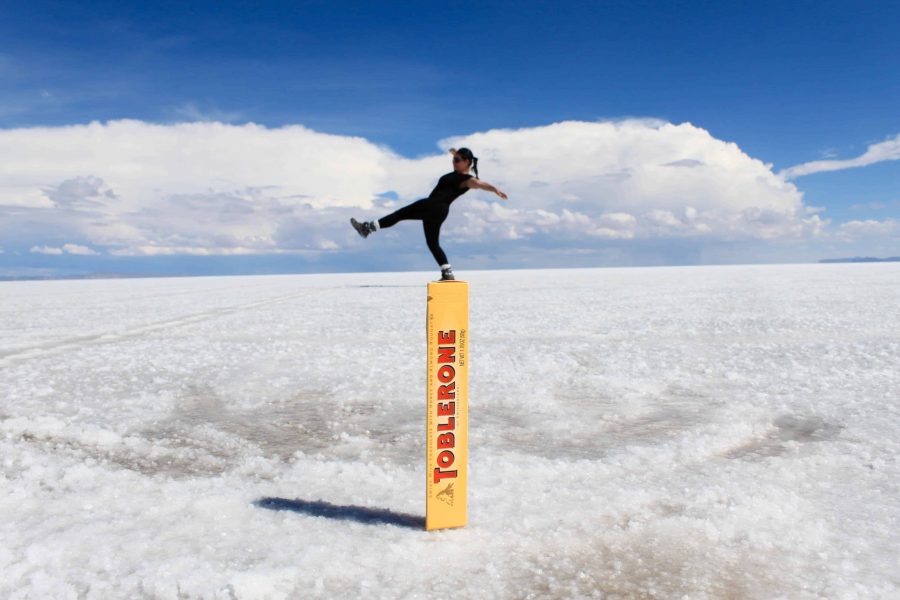 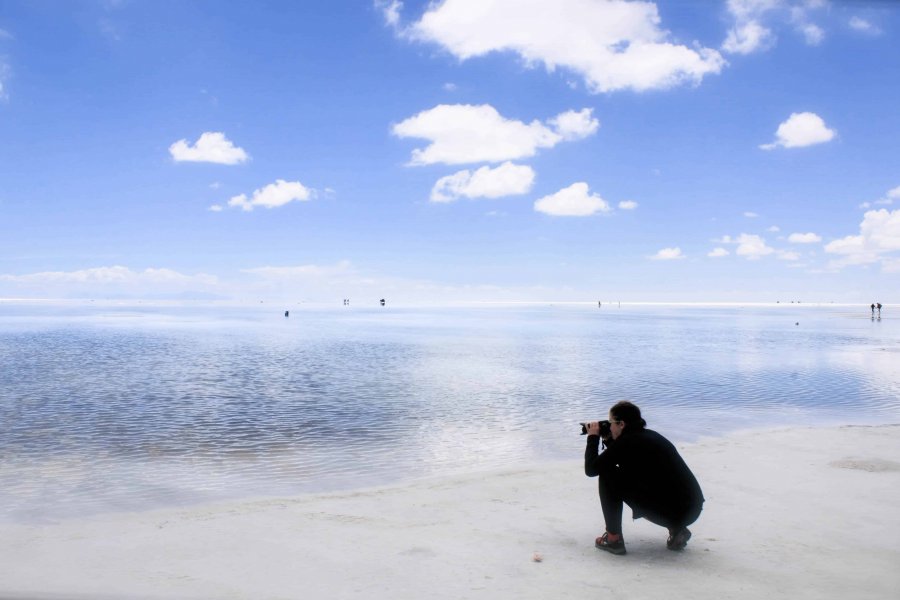 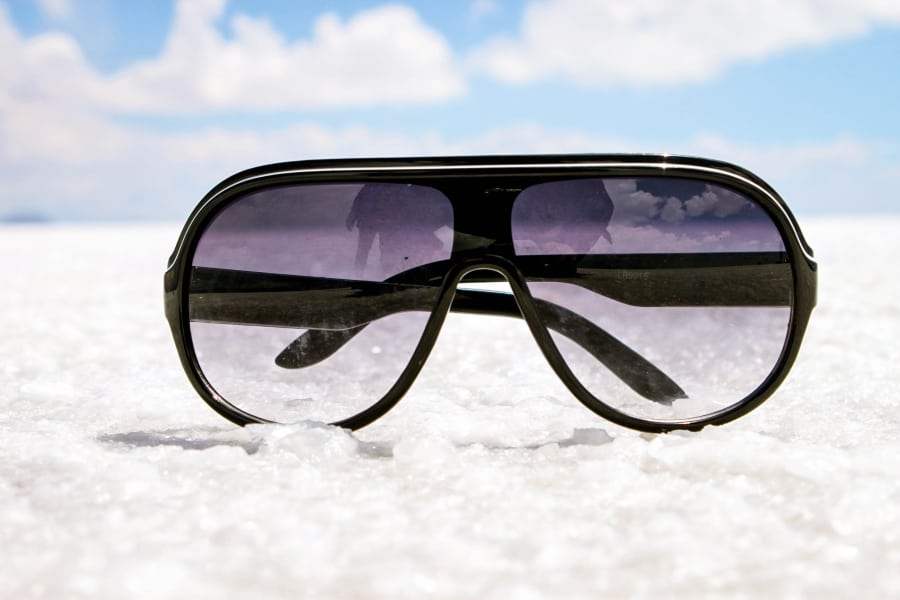 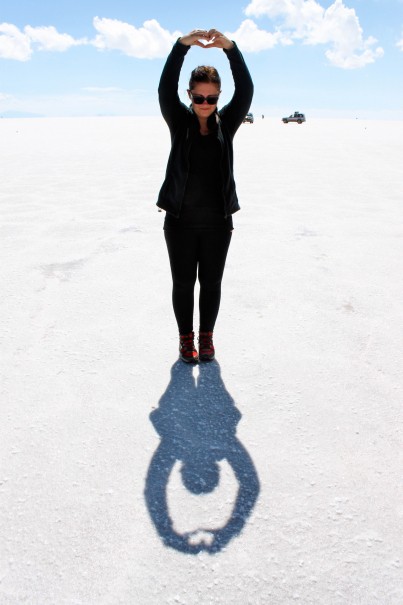 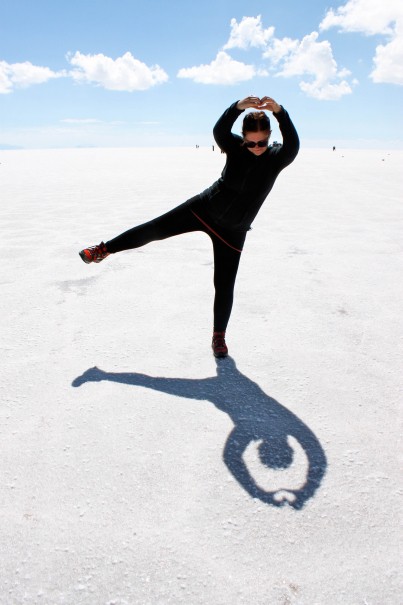 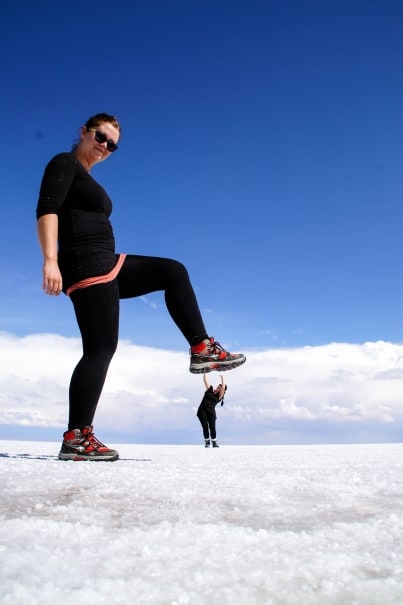 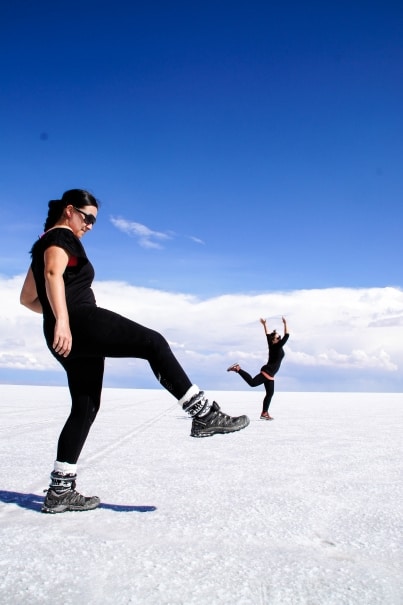 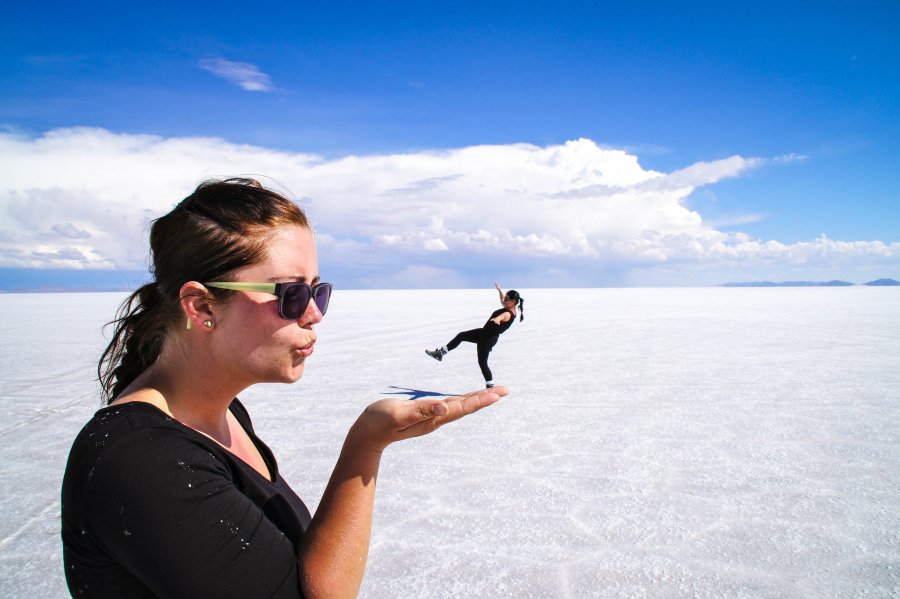 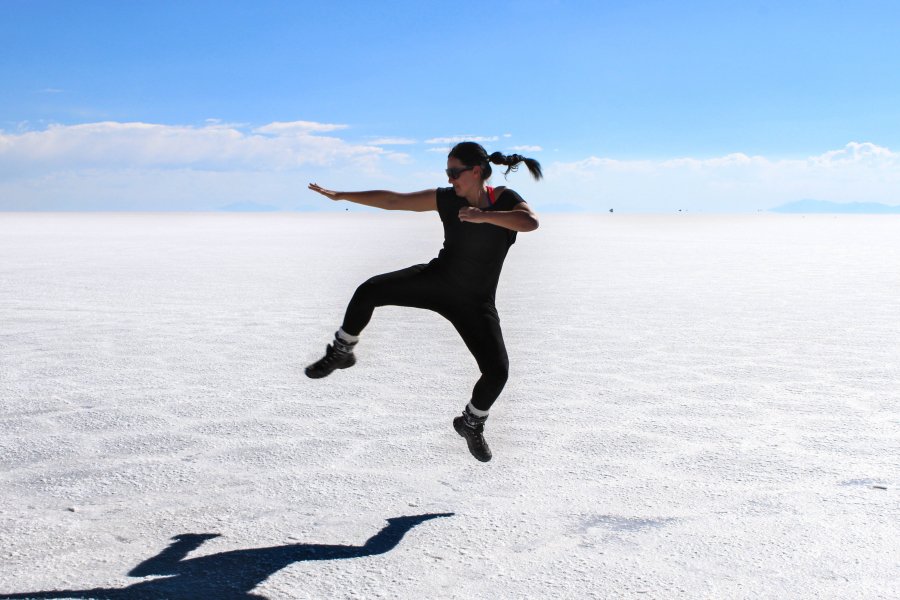 UYUNI IN THE RAINY SEASON

Bolivia’s Salar de Uyuni is pretty spectacular no matter when you visit. However – if you want those hypnotic mirror views that merits a reward, you need to go in the rainy season (December – March).

I went in January and think this is the best time to visit the Bolivia salt flats. The mirror effect is so striking and it looks like the largest mirror on earth – so beautiful. 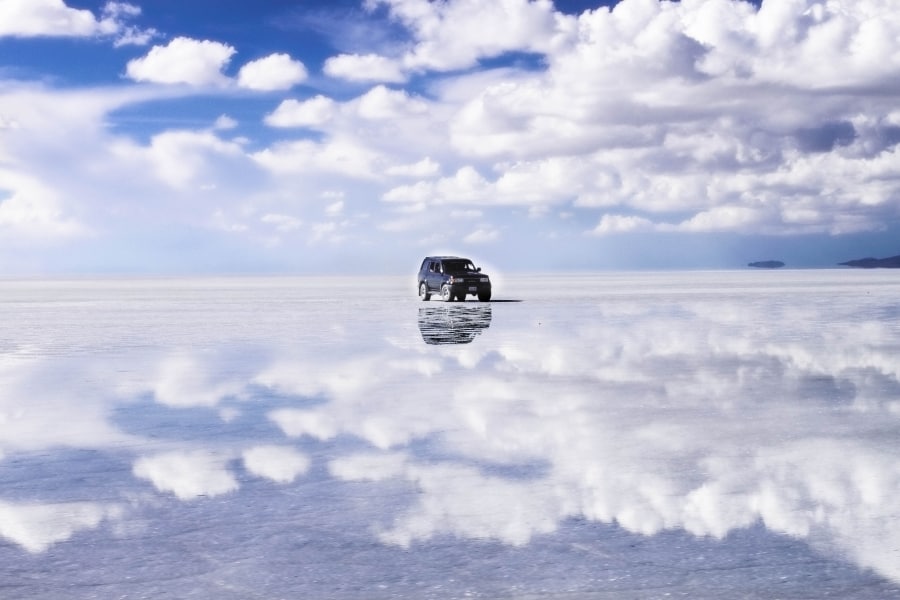 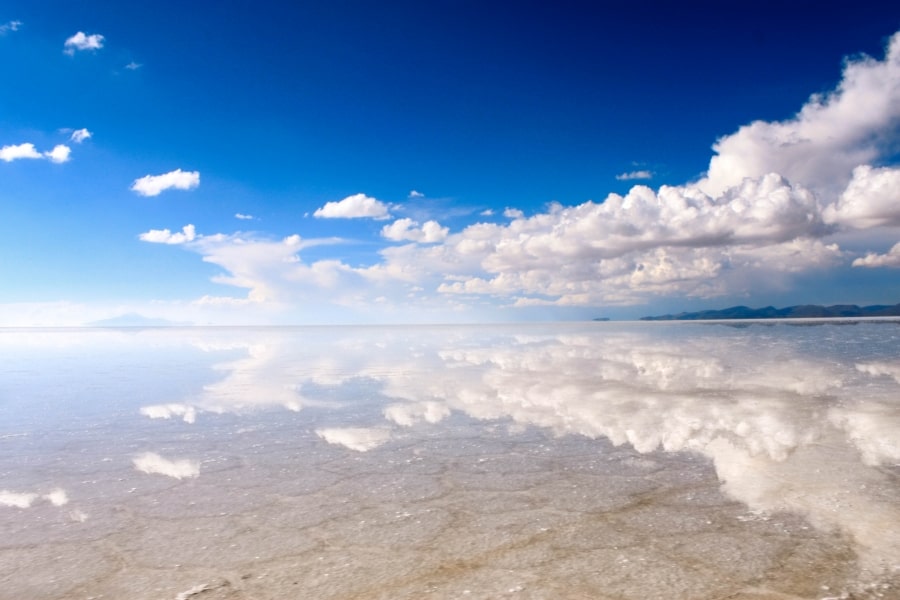 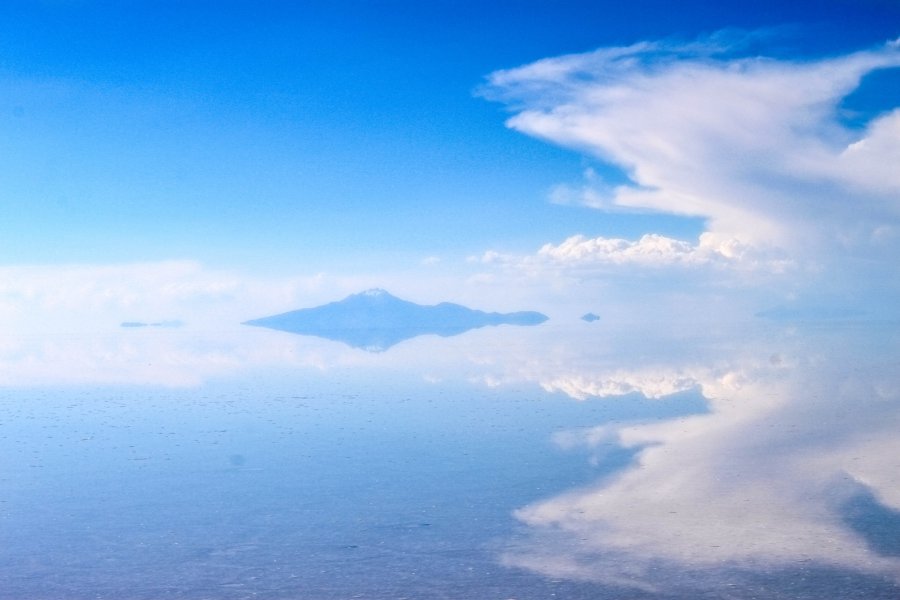 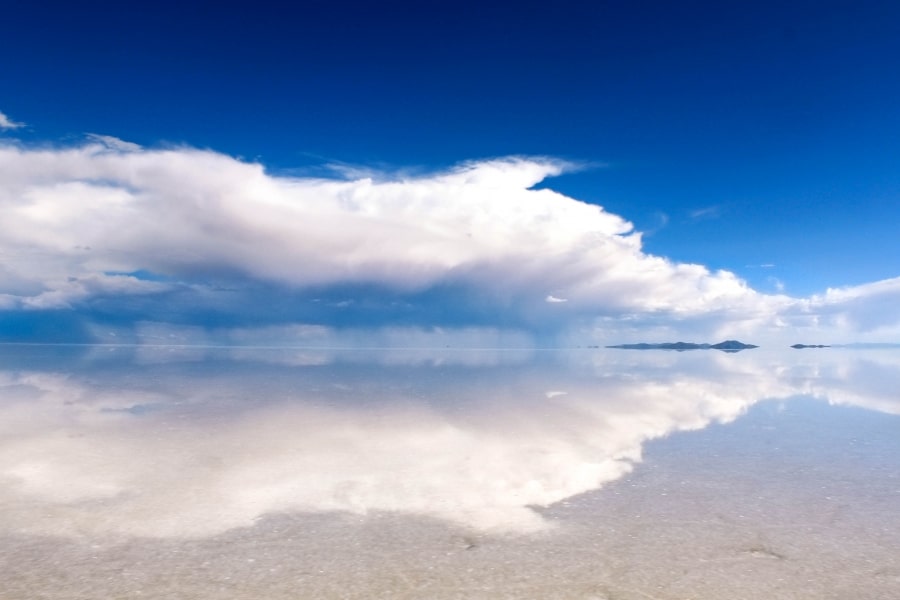 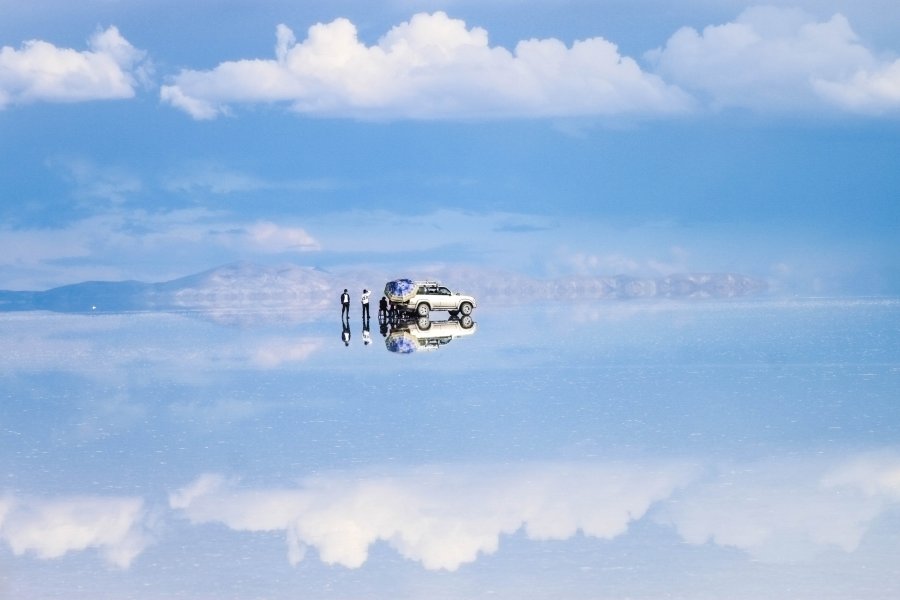 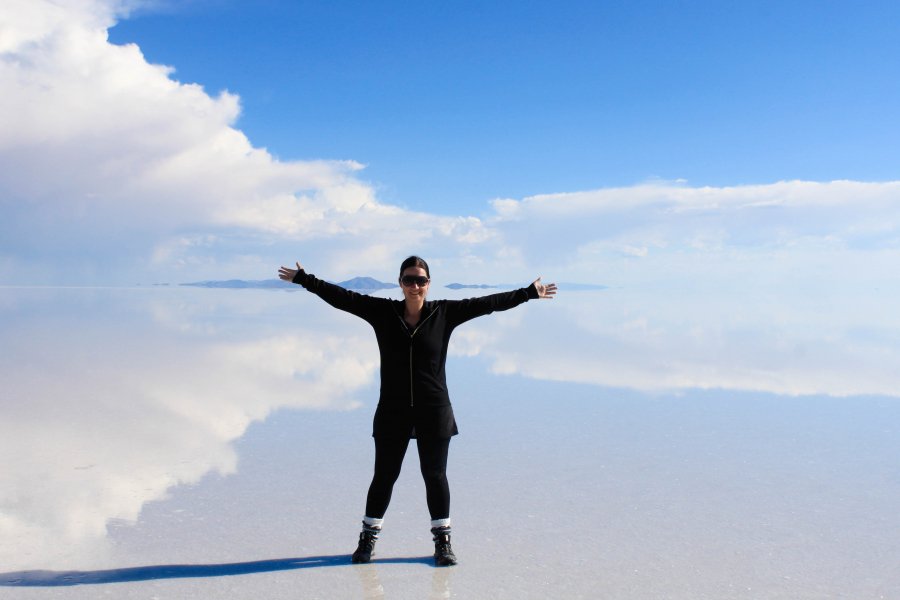 We spent six hours in Salar de Uyuni and also watched the sunset, which is the most beautiful time of the day. I spoke to someone in La Paz when we got back, and he told me that his tour company had only set off one hour for the salt flats. Another reason why it’s important to choose the right tour operator. 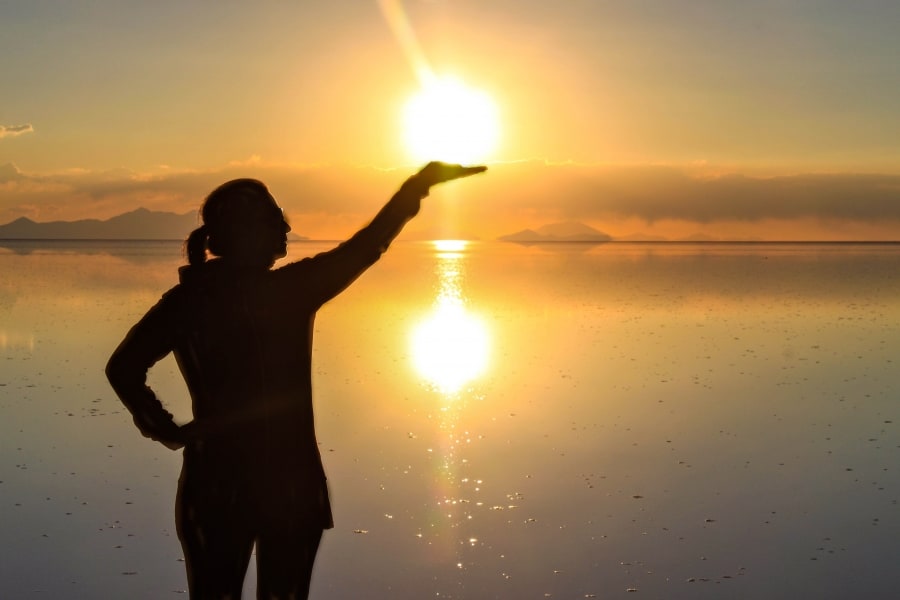 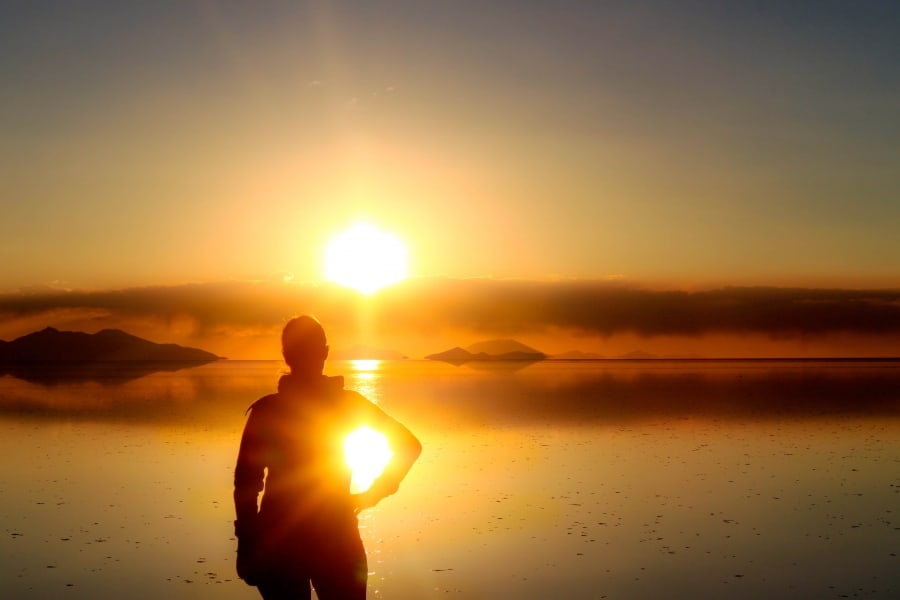 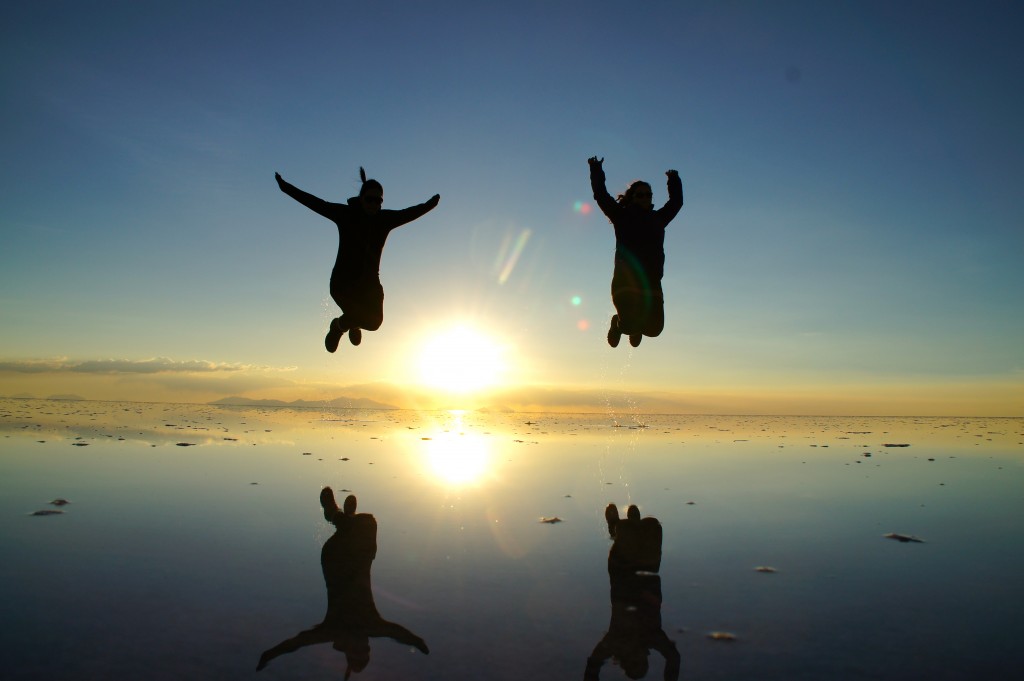 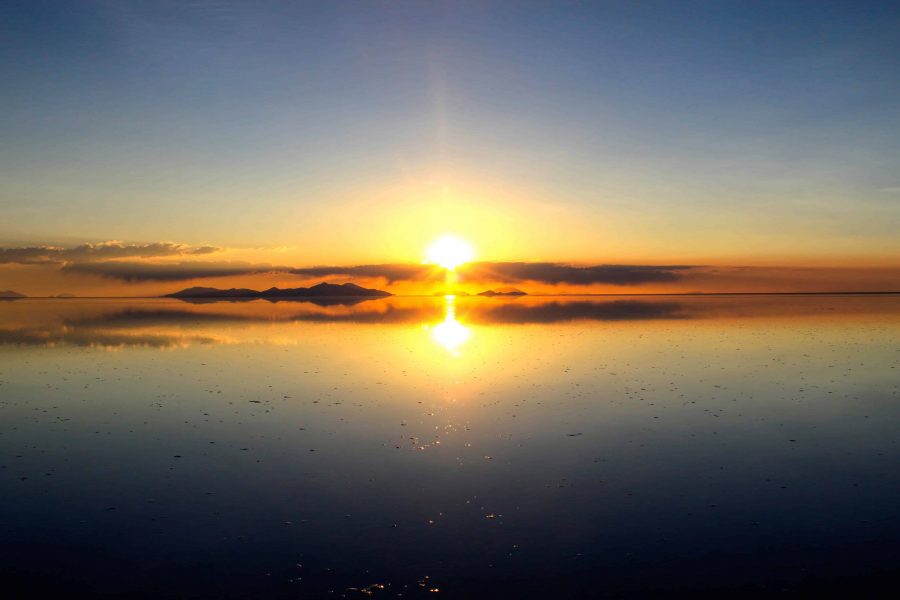 After viewing the sunset, we drove back to the city and spent the night at a salt hotel. How about that! Everything in this hotel was made of salt blocks. The walls were of salt, the chairs were of salt and the bed was of salt. Even though the hotel itself was rather basic, it was super fun to stay there.

I mean, how often can you say that you’ve spent the night in a salt hotel?

There are two peak seasons for visiting the Salar de Uyuni, Bolivia.

One is between July and October where the sky is super blue and the weather is on your side. The other is the rainy season between January and April, which by far is the most beautiful if you ask me. During the rainy season, a thin sheet of water covers the flats, reflecting a perfect representation of the sky above so that it is impossible to tell where sky ends and the land begins. Absolutely breathtaking!