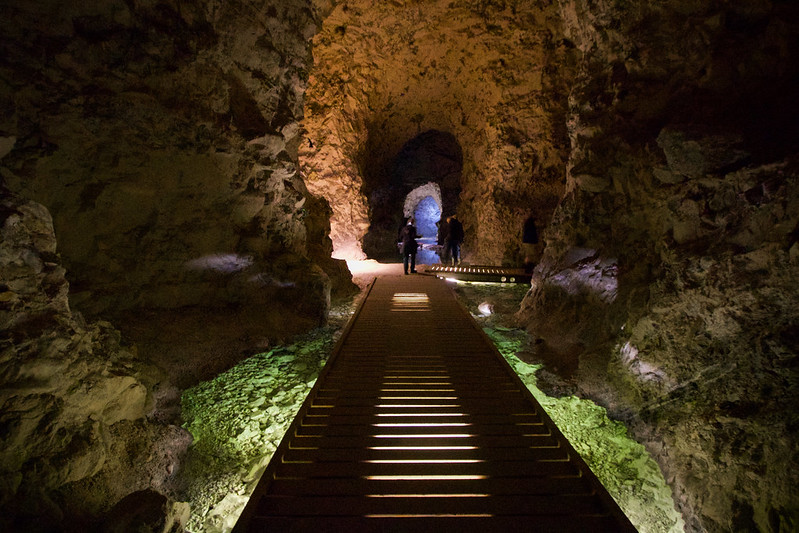 Planning on visiting Mønsted Kalkgruber, the world’s largest limestone mine? Get all the info you need right here.

Mønsted Kalkgruber is a really unique place, yet it’s not very known around here. I mean, I’ve lived in Denmark all my life, just one hour from Mønsted where the mine is located, but I’ve never heard about it until now.

It’s really spectacular, cool, huge and almost otherworldly, and it’s perfect for a fun day trip for the whole family. It’s so fun actually, that I visited not once, but twice this summer.

Why you should visit Mønsted Kalkgruber

Mønsted Kalkgruber is the world’s largest limestone mine. An endless maze of underground paths that stretches for 60 km and  up to six floors in height. Some of the caverns are as large as cathedrals while others are so narrow that a grown man couldn’t walk through them upright. In other words, the limestone underlying this region, beneath Mønsted in Denmark, is riddled with the biggest chambers, widest tunnels, and most mind-blowing voids anywhere in Europe.

If you’re the kind of explorer who enjoys venturing into wet, dark grottos in order to find more wet, dark grottos, Mønsted Kalkgruber is a dreamland. Not your thing? Well, it’s not as wild and rough as it sounds.

While you will get a sense of being underground, deep beneath the earth, you won’t be crawling, climbing or stumbling around in the dark. Once you get inside, two kilometres of the mine are electrically lit. The paths are wheelchair and stroller-friendly, and it’s almost impossible to get lost.

What makes the limestone quarry so interesting and cool is the diversity inside. The labyrinthine paths lead to different caverns with rocks in pretty colours. Some are green, others are blue, but most of them are yellow and white.

There are also underground lakes inside, and they’re all very clear. Bridges allow you to walk over the larger ones for a better look. 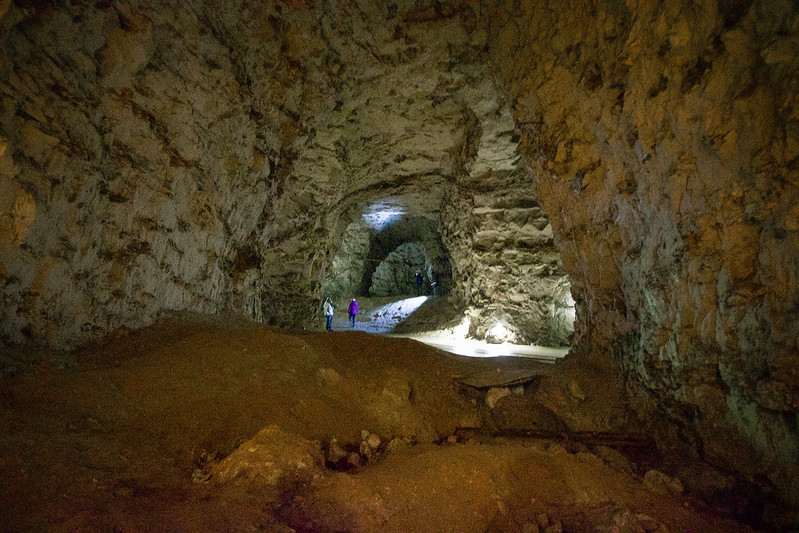 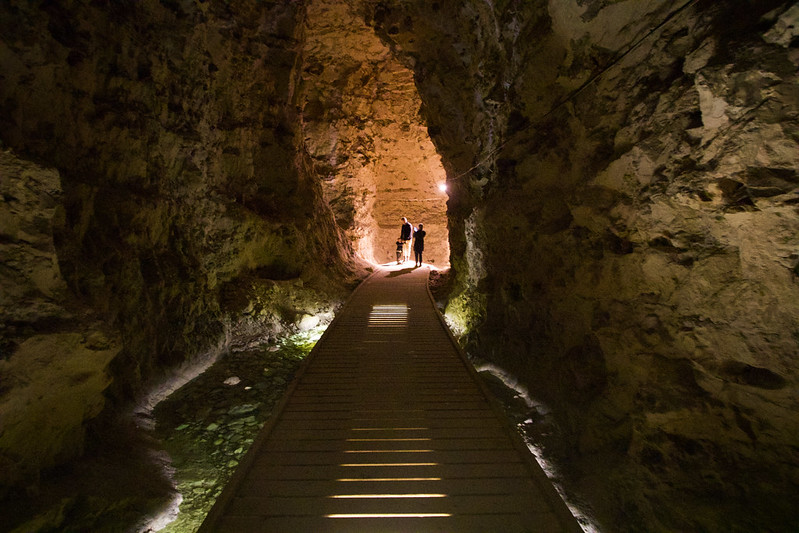 Back in the 11th century, limestone mining became popular in Denmark because the stone was used to build churches. In just 200 years, more than 2,000 stone churches were built, around 10 each year.

By the 15th century, limestone from Mønsted was used in public construction works in large towns in Jutland, Denmark. It remained profitable until the mid 20th century. The mines closed in 1956. 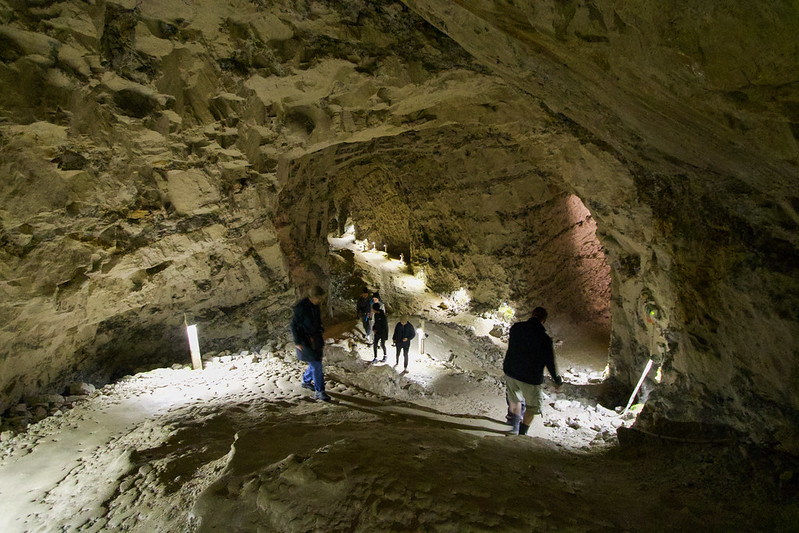 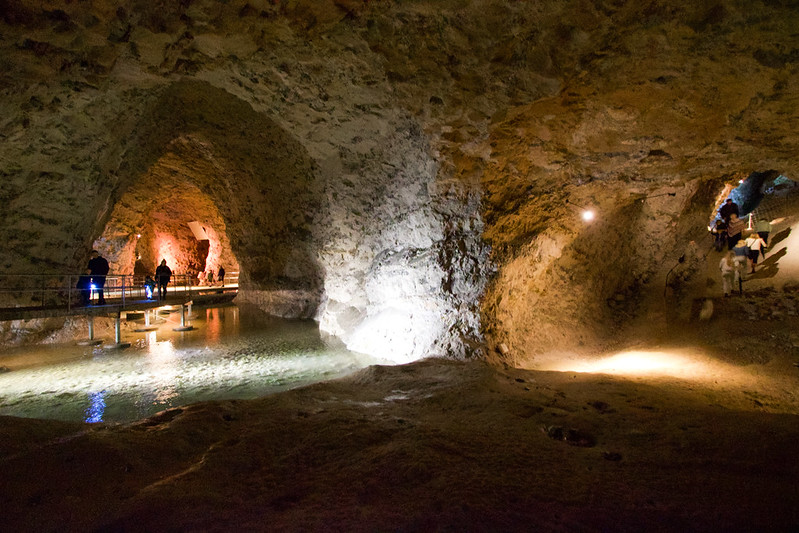 Deep within the mine at the largest lake is an underground cinema with seating for about 80 people. It displays a multimedia show very half hour, and the images are projected on the cave walls and reflected in the water surface.

The show tells the story of Mønsted Kalkgruber and the people who worked here. It also explains what a limestone quarry is, why they burned the limestone and why bats live underground.

The movie is in Danish with English and German subtitles. 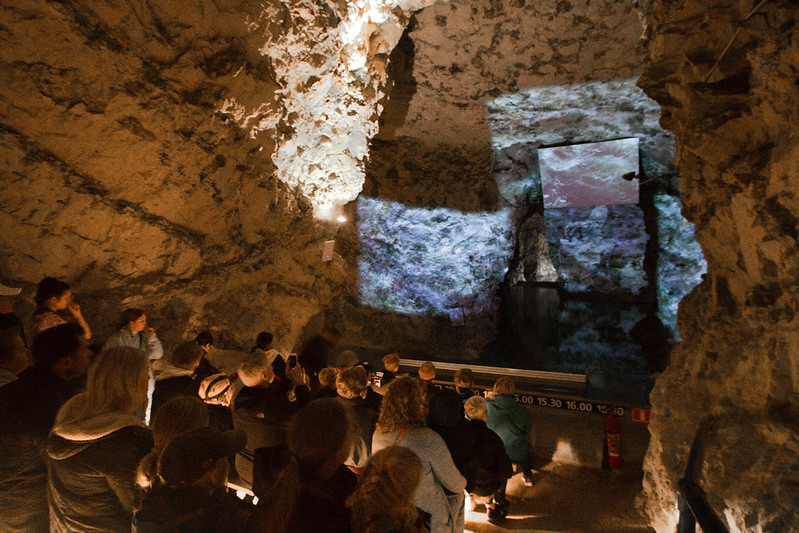 A fun fact about Mønsted Kalkgruber is that it’s used for storing cheese.

Yep, you read it right.

The humid climate in the caves is perfect, as it’s constantly 8C with 98% humidity. The cheese is produced by Arla, after which it goes to Mønsted. It stays here for four weeks, and then goes back to Taulov Dairy where it stores for another two weeks.

Mønsted Kalkgruber is the only place in Denmark where you can buy the cheese (it’s shipped off and sold in Germany). You can also taste it in the cafe with a slice of Danish rugbrød.

Catch the mine train

The mines are easy to explore by foot, but if you aren’t up for it, you can also take the mine train. It normally runs during the summer, but because of the Corona virus, it didn’t run this year. 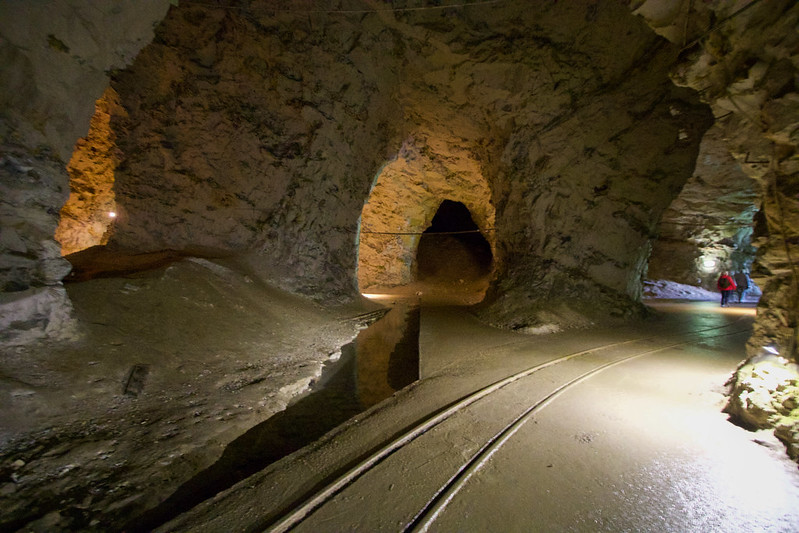 Around 18,000 bats live in the mines in the colder months. During spring and summer the bats are active all over Jutland feeding on insects.

The bat is an endangered species in Denmark, so to protect the bats, you can only visit the mine during summer. Mønsted Kalkgruber museum is intent on preserving the bat population, and they even have a bat counter to keep count of each bat’s entry and exit from the caves. 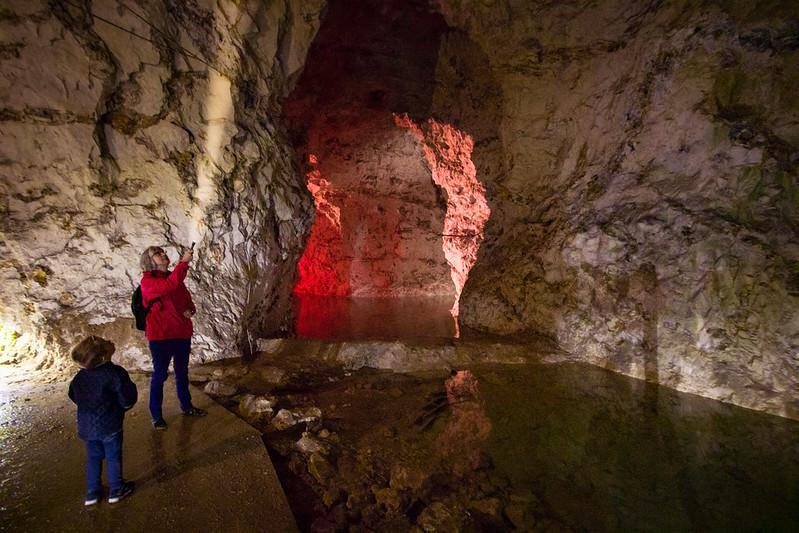 About Mønsted limestone mine: The mine is located a 5-7 min walk from the entrance. Once you enter, you’ll notice a shift in temperature. It’s only 8 degrees °C in the mine, so you need to dress accordingly. The ceilings are high and well-lit, and the paths have maps and marked routes, so you won’t get lost. At the parking lot and entrance, there’s a museum, a gift shop and an old lime mill to give you a better understanding of how it was used.

After visiting, you can grab a bite at Café Kridthuset or you can bring your own food and have a picnic outside. There are bathrooms on site, too, but not inside the caves. 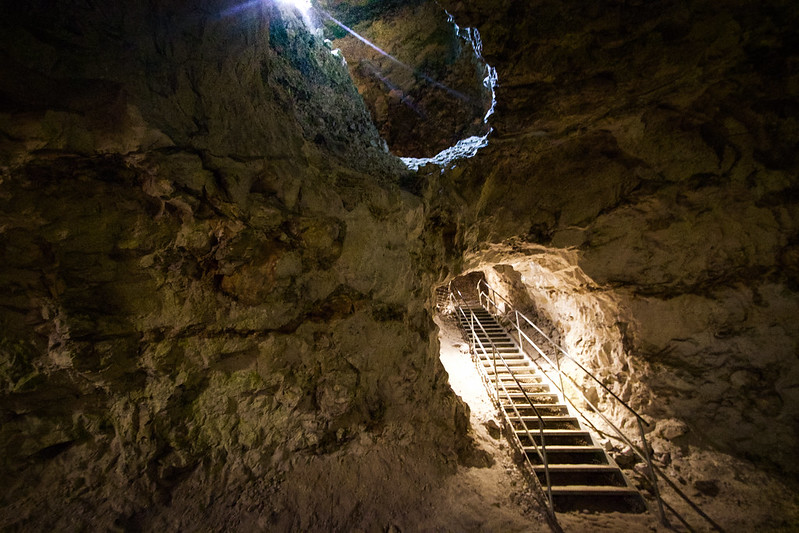 As I mentioned above, it’s slightly cold inside the caves, so bring a sweater or jacket. If you’ve got kids, I recommend rain jackets and pants + rubber boots. They will get dirty. 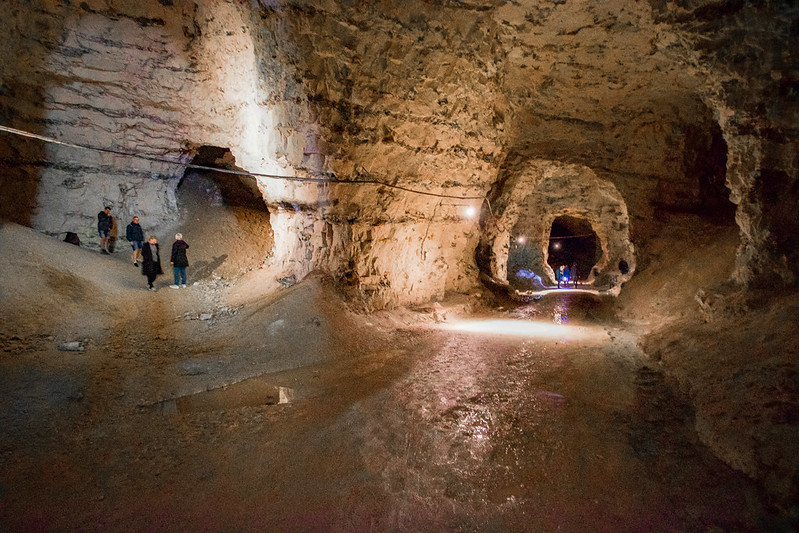 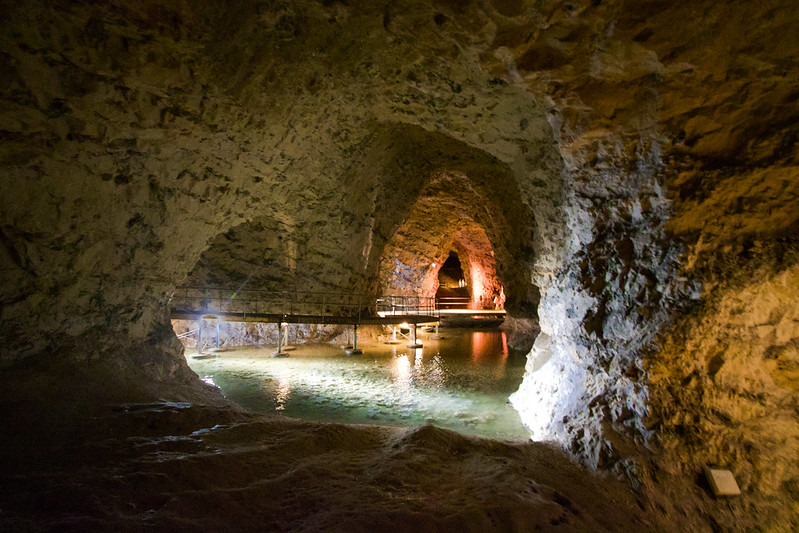 Visiting Mønsted Kalkgruber? Ask me anything in the comments! 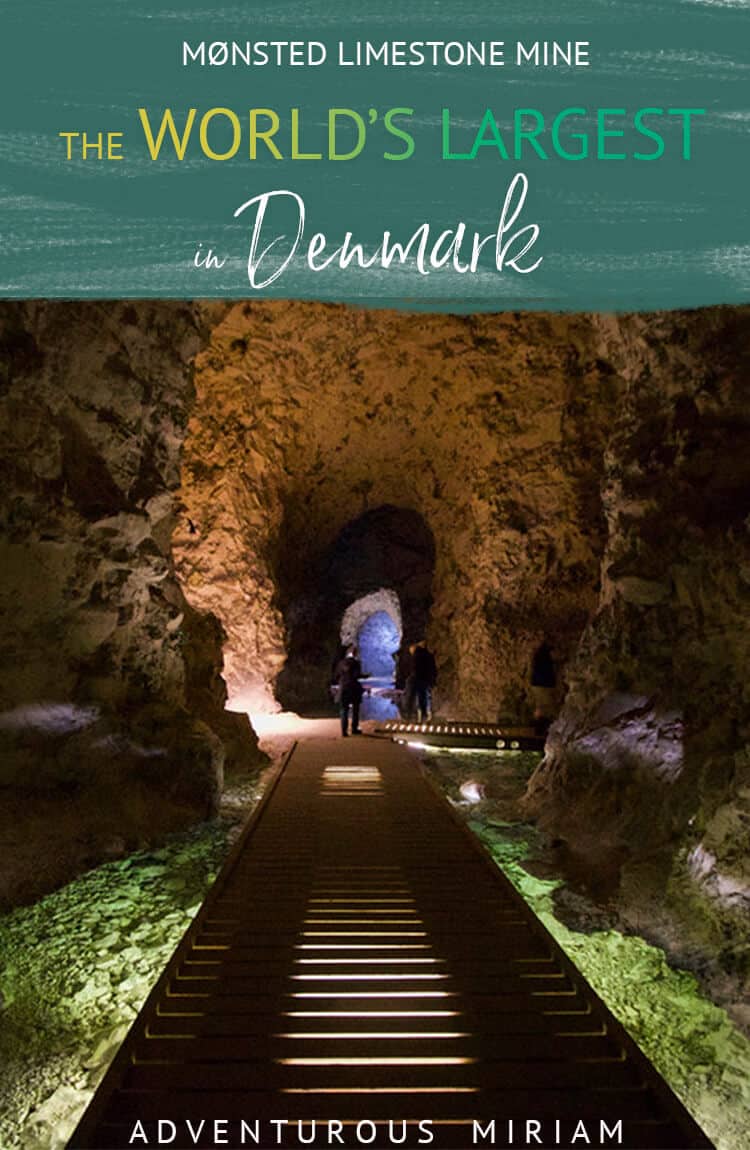