The Chronicles of Georgia is a colossal stone monument that goes by several names. Often called “The Georgian Stonehenge”, the “Stonehenge of Tbilisi” or “History Memorial of Georgia”, this monument is a collective of HUGE pillars depicting the life of Christ and ancient Georgian history.

The Chronicles of Georgia is seriously massive. And the whole construction is unlike anything else.

In fact, it might be one of the coolest things I’ve seen in Europe. Or Asia for that matter. Because technically, Georgia is located on both continents. If you’re wondering what to do in Tbilisi, or if you’re looking for a one-of-a-kind sight, this is it. There’s very little info available about the monument, but I’ve gathered all the tips and facts I could find to help with your visit.

Read next: 15 amazing things to do in Tbilisi, Georgia 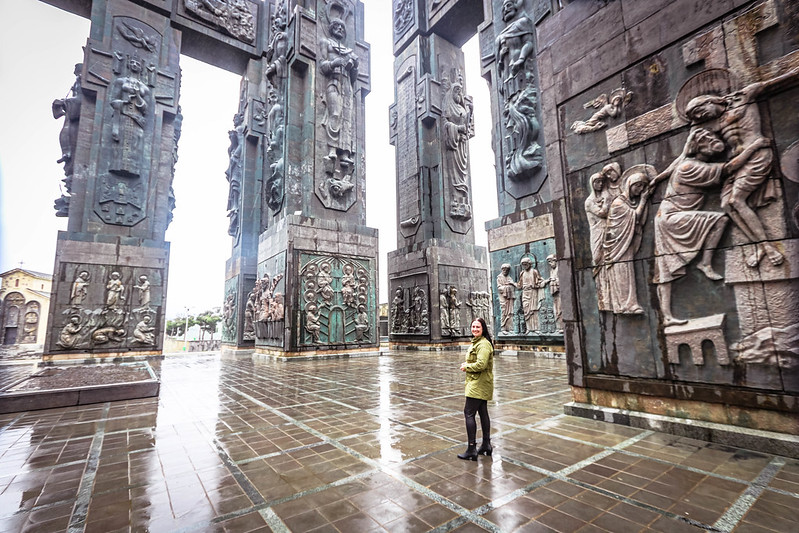 What are the Chronicles of Georgia?

Not so long ago, just some 30 odd years, Georgian sculptor Zurab Tsereteli decided to make a memorial to commemorate Georgia and its 3.000 year old history. To illustrate the greatness of the country, he constructed 16 giant pillars, each 30m high, in a perfect, symmetrical square.

He began working on the monument in 1985, but never finished. Maybe because the Soviet Union collapsed in 1991 and fundings ran out. No one really knows.

Today, the monument is partially under construction, but I barely noticed. Sure, if you look for it, there are some missing pieces here and there. But I was so impressed by how massive the whole thing was that I forgot everything else.

Once you get closer, you’ll see that the upper half of the pillars is depicting men and women. Those are kings, queens and heroes of Georgia throughout the millenniums. The lower part of the pillars commemorate the life of Christ. That’s because Georgia is the second oldest Christian country in the world after Armenia. 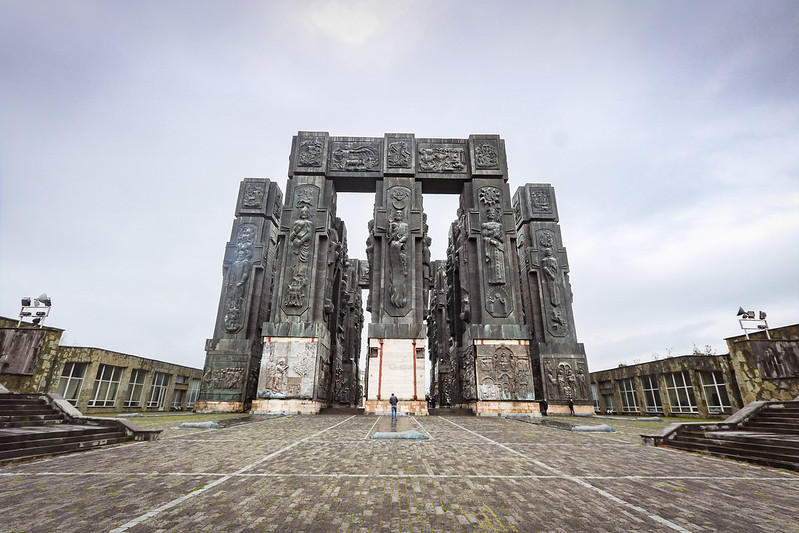 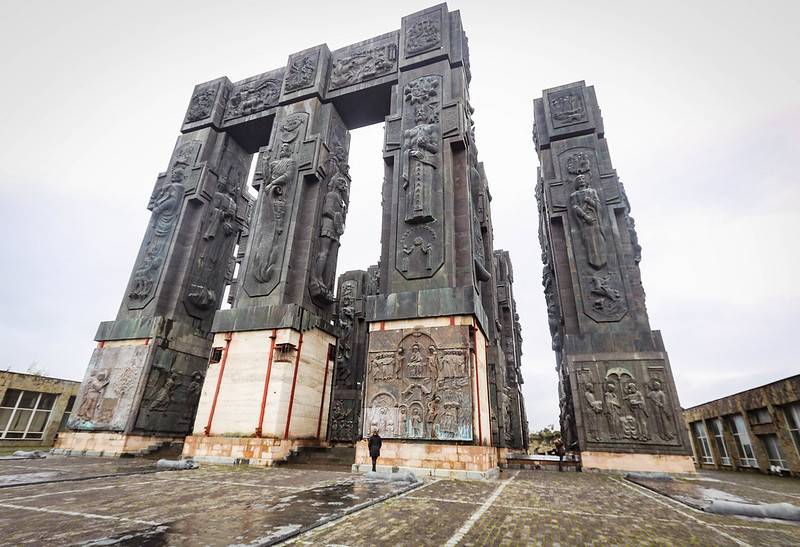 What to see at Tbilisi Stonehenge 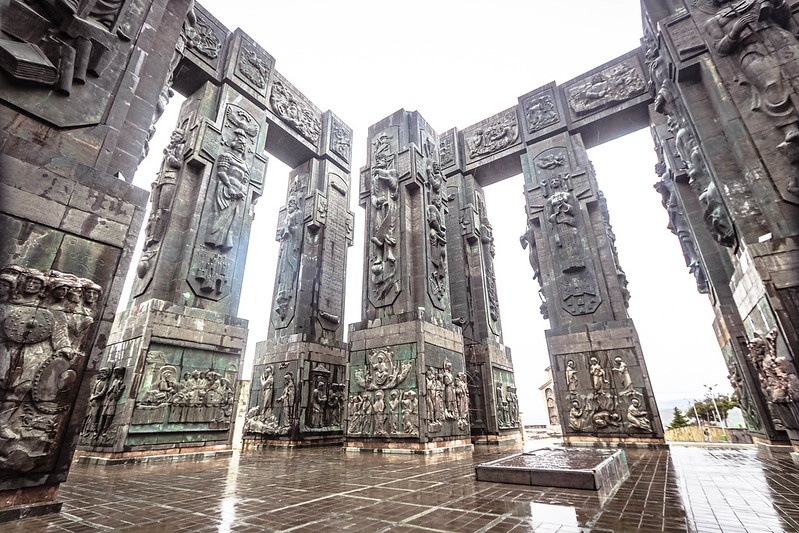 A prime example of Brutalist architecture

We know who built it, and when the construction started. We know how tall the pillars are, how many there are and what’s depicted on them. And that’s about it.

Now, I’m no architect, but I would classify this monument as Brutalist style. Or at the very least Soviet style (if there is such a thing). Brutalism is characterised by simple, block-like, concrete forms. The buildings are raw, aggressively tough and have an unapologetic lack of concern for comfort.

The Chronicle of Georgia ticks all the boxes, don’t you think? 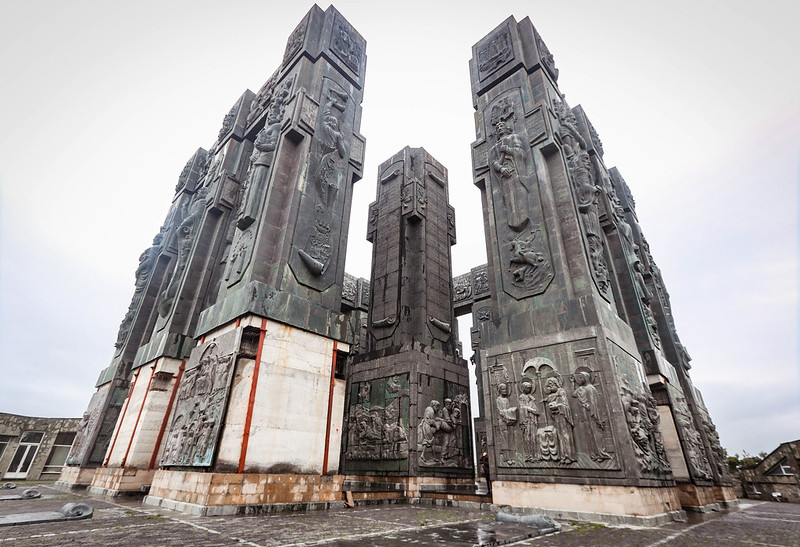 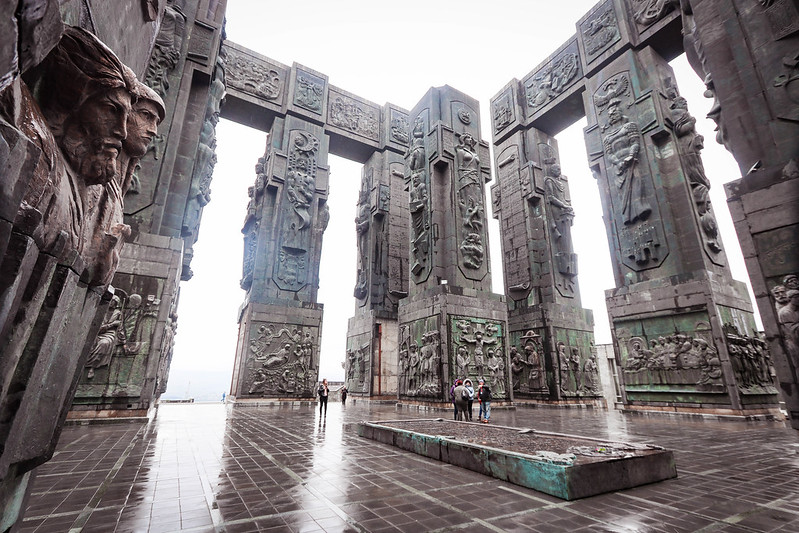 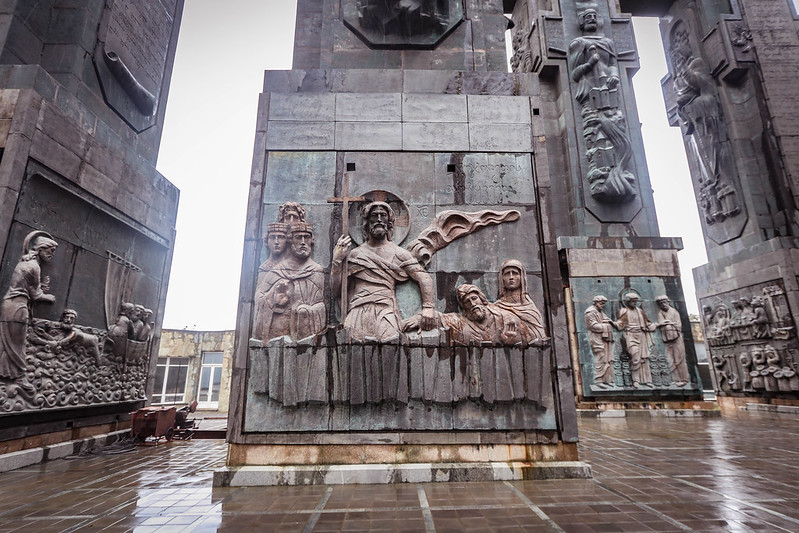 My trip to The Chronicle of Georgia

When I researched for things to do in Tbilisi and saw an image of these massive pillars, I knew I had to visit. And I’m so glad I did.

When you see it from below, you have an idea of how big it is. But it isn’t until you’ve climbed the many, MANY stairs up there, that you actually realise HOW massive it is.

If you follow the stairs to the viewing platforms on each side (after you’ve catched your breath), you’ll have a panoramic view of the Tbilisi Sea and the suburbs of Tbilisi. While the name might suggest differently, Tbilisi Sea is actually an artificial lake, built in 1953. It’s a popular place in the summer.

There’s also a small chapel and statues of 13 wise men, who played an important role in spreading Christianity in Georgia. 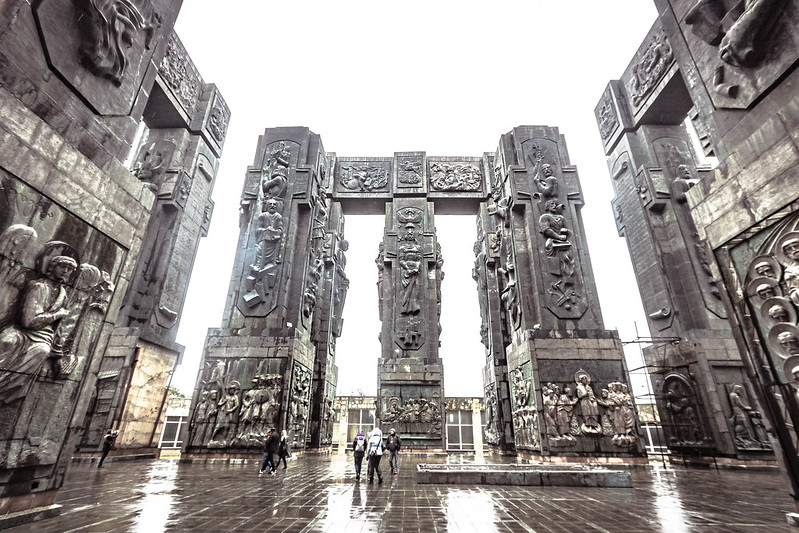 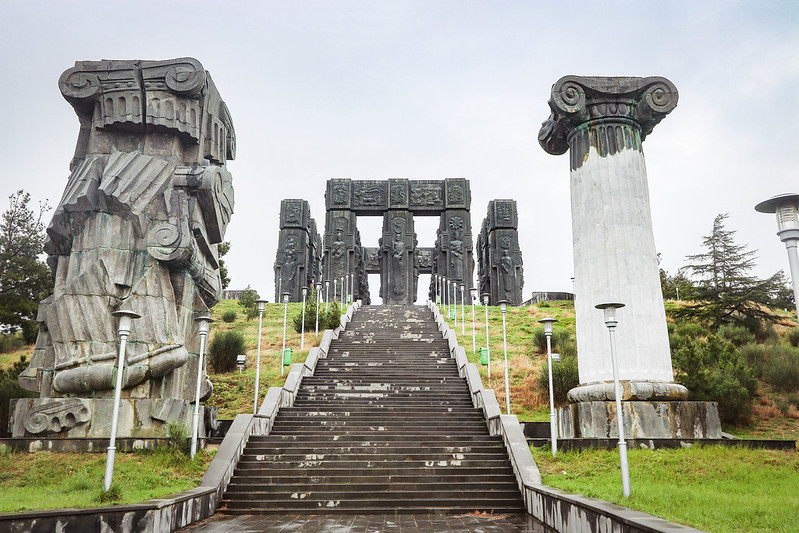 3 reasons why you should visit

If you’re still not convinced you should visit, let me give you three good reasons:

One of the best things about visiting the Chronicles of Georgia was the lack of people. I saw maybe four or five other tourists, so it wasn’t like we were tripping over each other. 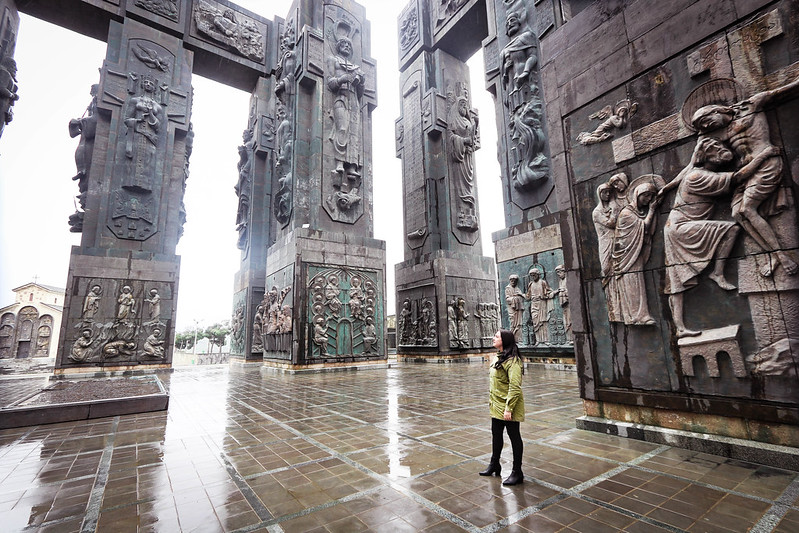 How to get to the Chronicles of Georgia from Tbilisi

Figuring out how to reach the Chronicles of Georgia can seem daunting, to say the least. But I promise, it’s worth it. The Chronicles are located to the north, about 20 minutes drive from the centre of Tbilisi.

You have three ways of reaching the monument: by public transportation, by taxi or on an organised tour.

Take the metro + bus
An easy way to get there is by taking a metro to Grmagele Metro Station and then take bus #60 just outside the metro station. It takes about 20 minutes with the bus. You can buy a ticket at the ticket machine in the metro and bus or pay with a Metromoney card. This is a super cheap public transport card in Tbilisi. Read more about it here.

Go with taxi
Your other option is taking a taxi. However – the Chronicles of Georgia is still so much under radar that many locals don’t know what or where it is. So don’t be surprised if you ask a taxi driver about it, and he looks confused. I recommend that you take a screen shot of the Chronicles of Georgia and save it on your phone. When you talk to a taxi driver, show him the photo and say that it’s near the Tbilisi Sea. Remember to agree on waiting time to ensure a return ride! The price of the taxi from the city centre is usually around 10-12 GEL.

Join a day tour
Your third option is joining an organised tour that includes a trip to the Chronicles of Georgia. For instance, I haven’t been on this tour, but it has my name written all over it!! There are other tours as well. Just try to google it, and you’ll find several options. 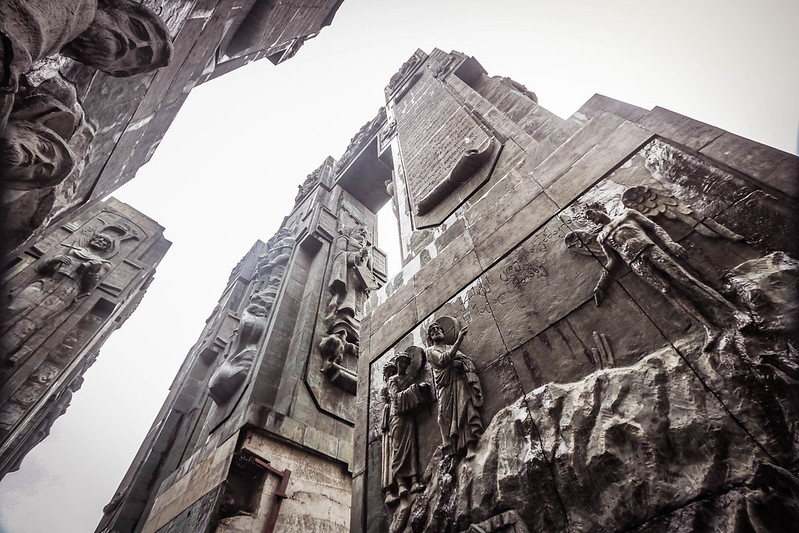 Before you go – Read more from Georgia

Are you thinking about visiting The Chronicles of Georgia? Let me know if you have any questions! 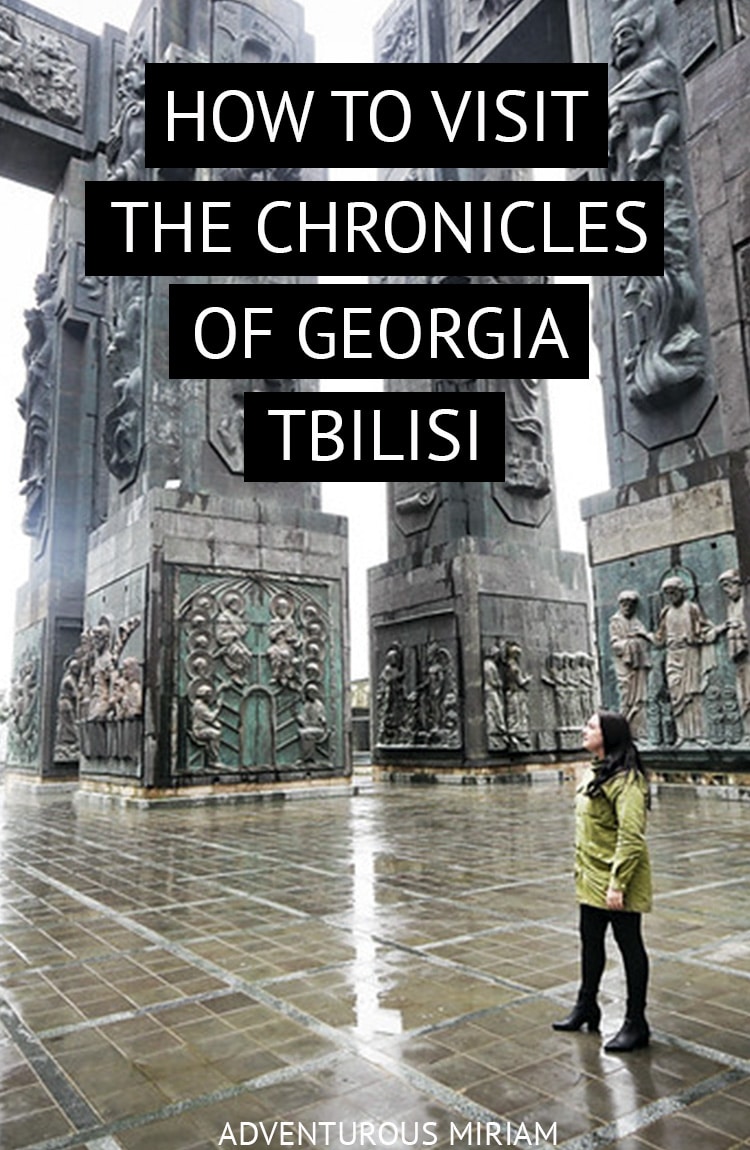