How to easily take the hydrofoil to Peterhof Palace St Petersburg 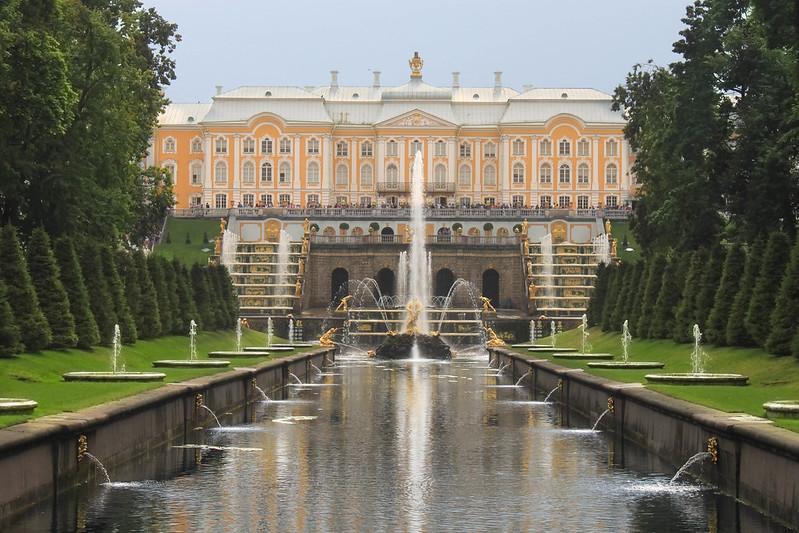 Wondering how to take the hydrofoil to Peterhof Palace? Get all the info you need right here.

The impressive Peterhof Palace is one of the best things to do in St Petersburg. Crowned a UNESCO World Heritage site in 1990, this architectural masterpiece of majestic palaces and gardens is often referred to as the “Russian Versailles”.

Peterhof Russia lies a mere 28 km from St Petersburg, and it’s easy to visit on a day trip.

How to take the hydrofoil to Peterhof

There are several ways to get from St Petersburg to Peterhof Palace. If you arrive by train & bus (1,5 hours) or minibus (about 1 hour), you’ll approach the palace from the Upper Garden.

A more scenic route to Peterhof is by hydrofoil (45 minutes). The hydrofoil (so-called meteors) is the most expensive option, but it is also the most comfortable. You will arrive in the Lower Park.

One of the great things about taking the hydrofoil to Peterhof is that you’ll sail past some of the main sights in St Petersburg such as the summer palace and the winter palace. It’s a great way of experiencing the city from a different side.

This is how to do it: 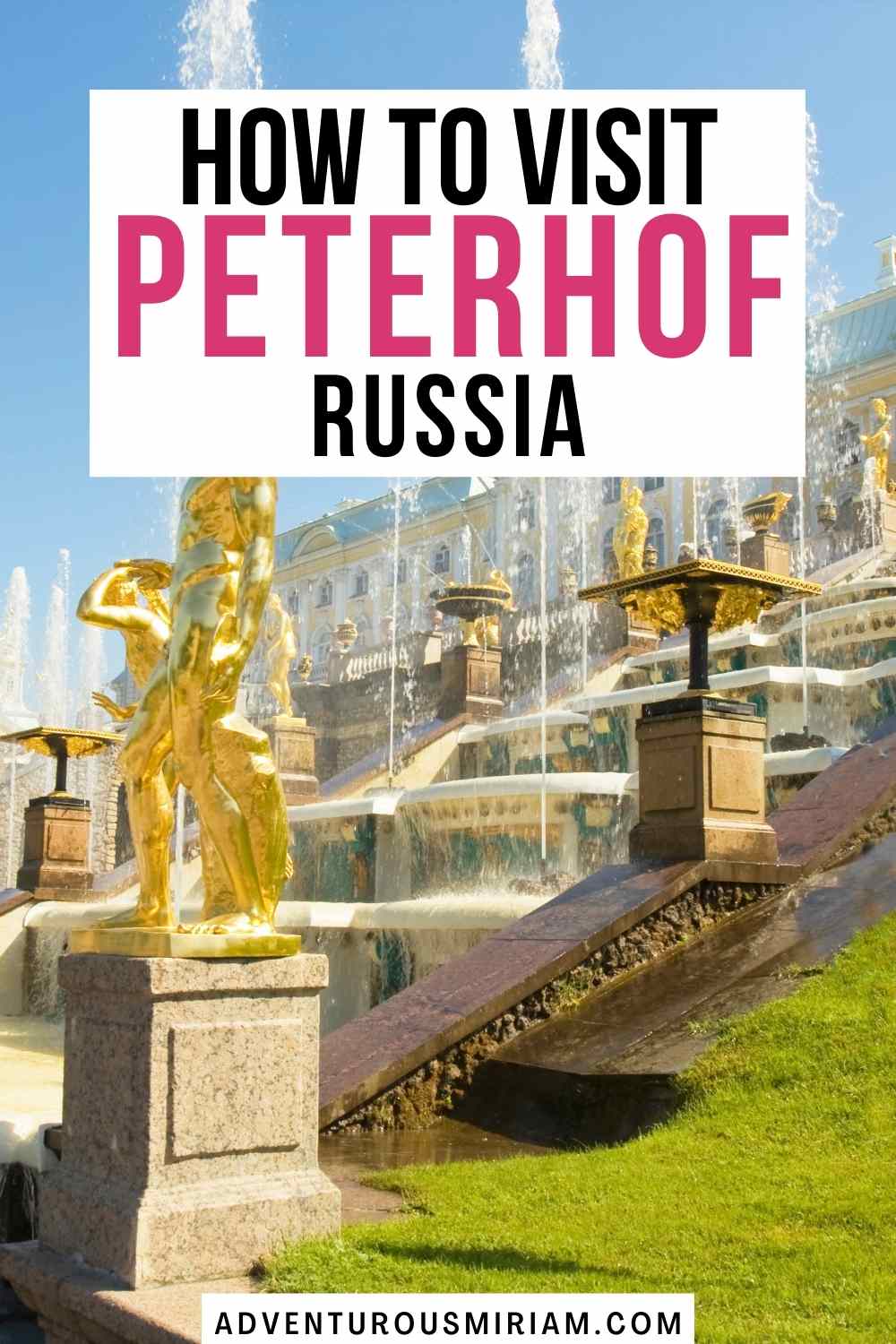 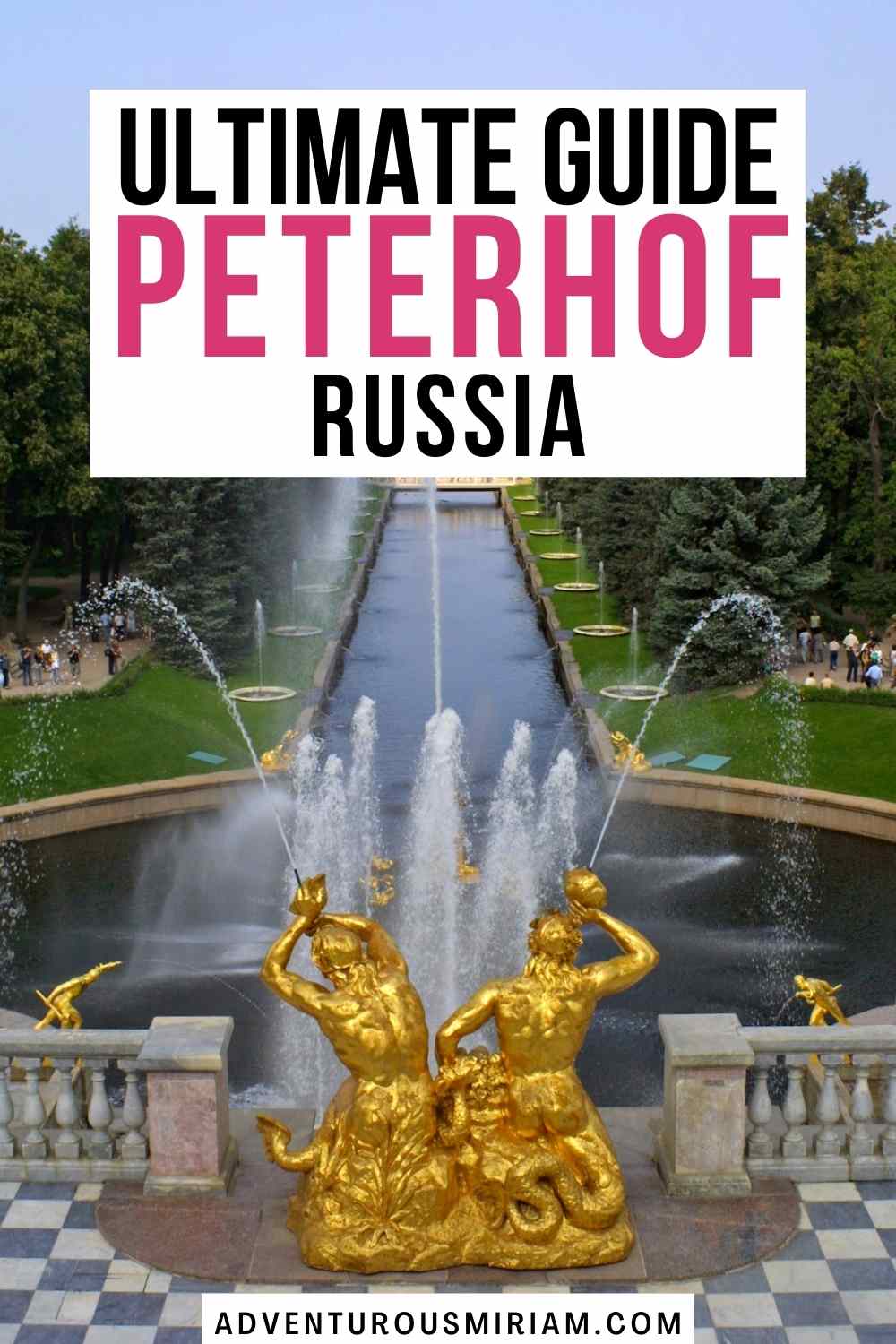 Which company to choose

It doesn’t really matter which company you choose as the price is more of less the same. What differs is that some of the companies provide online tickets while others don’t. Also their departure location is different.

Where is the hydrofoil located?

Have everything taken care of

If you’re on vacation and want someone else to take care of the planning, you can book a trip with Get Your Guide. A trip includes a ride with the hydrofoil, a guide at Peterhof and entrance fees. You can find the latest prices and book here. The guide will meet you in St Petersburg and take you to Peterhof and back. 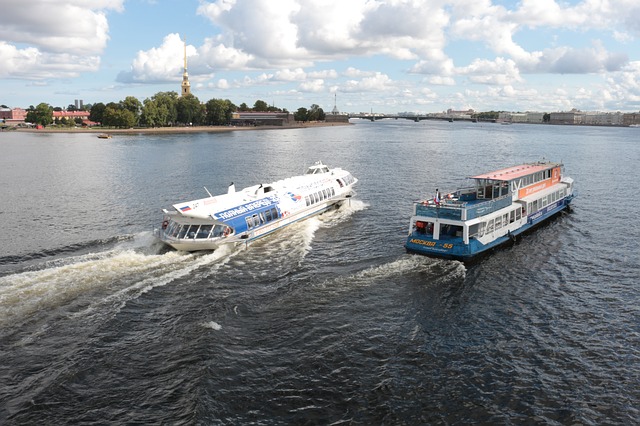 Image by Pixikus from Pixabay

How to buy an entrance ticket for Peterhof

You certainly don’t need to visit ALL of them to experience the place. You can get an overview of prices and the opening hours here.

After touring the Grand Palace, I ventured to the Upper Gardens and had to learn the hard way that once you go out of the Lower Park, you have to pay entrance fee ($15) to re-enter. Even if you’re only heading straight to the hydrofoil boat to get back to the city. So that was annoying, especially because there weren’t any warning signs saying: “Hey foreigners, when you see a sign that says EXIT, it means you’re ex-it-ing.”

There’s a small cafeteria and a tiny kiosk right outside the Lower Gardens. But be aware that also here you have to pay entrance fee if you want back in.

Peter Alexeyevich – also known as Peter the Great – was Tsar of Russia from 1682-1721 when he founded the Russian Empire.

He built Peterhof Palace in 1709 (which means Peter’s court in German). Around that time, from 1700 till 1721, Russia was at war with Sweden, and a decisive battle in Ukraine became the turning point of the whole war. The Tsar wanted to celebrate this victory so he dedicated Peterhof to the victory over Karl XII. He got the inspiration for the palace design during a trip to France where he saw Chateau de Versailles.

If you’ve been to Versailles, you can probably see the resemblance with this St Petersburg palace. However, one grand difference is the fountain complex, which is conceived on a much larger scale with gilded figures and several springs of sparkling water. 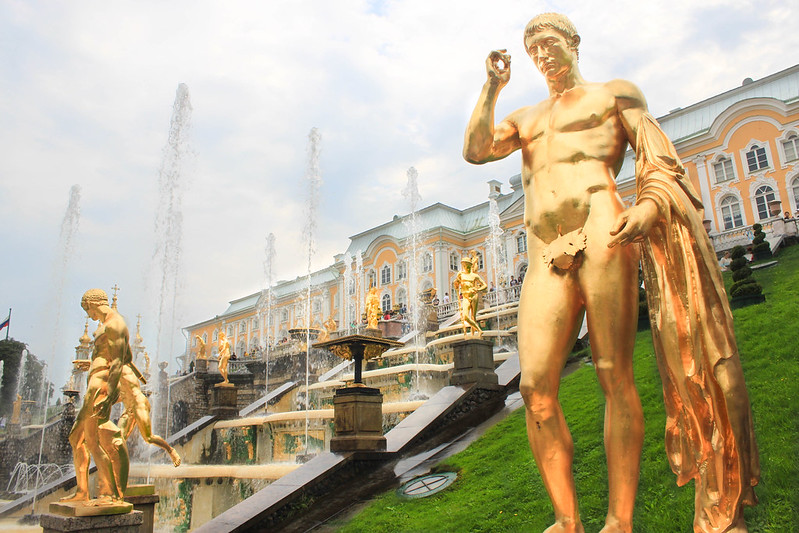 What to see at Peterhof

As mentioned, Peterhof consists of 10 museums. They each have separate opening hours and entrance fees, so make sure to research this ahead of time. Also, most of them are NOT baby carrier and wheelchair accessible.

The most important things to see at Peterhof are: 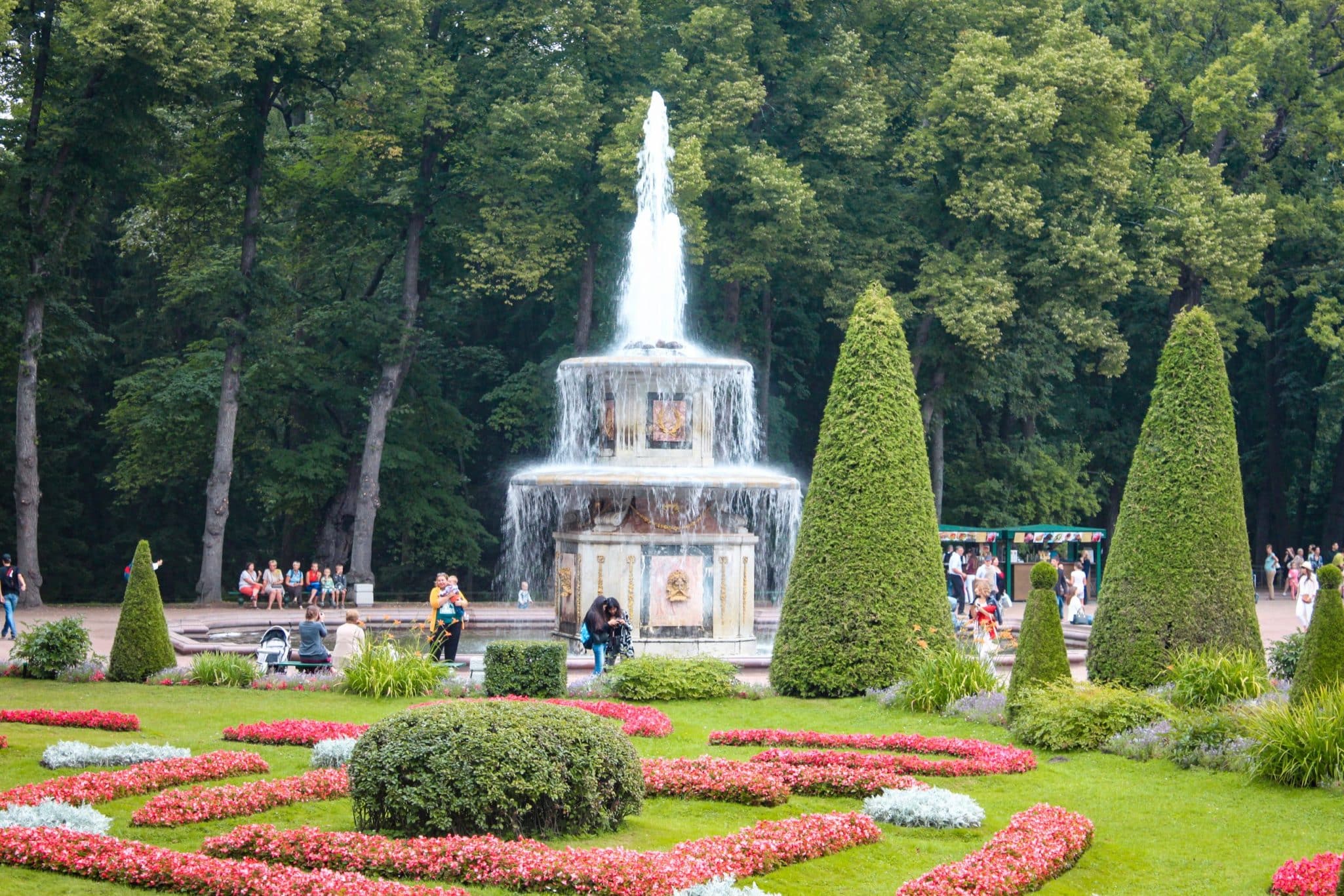 The hydrofoil arrives by the entrance to the Lower park, so let’s start there. The beautiful Lower Park has no less than 150 fountains and four cascades, impressive sculptures and sculptured trees and bushes. Here are the highlights:

In front of the Grand Palace is a checkerboard-tiled terrace that offers a spectacular view. Stand behind this marble balustrade and savor the moment. The two fountains, Neva and Volkhov, represent two rivers in northwestern Russia. Just below the terrace is the grandiose Grand Cascade. 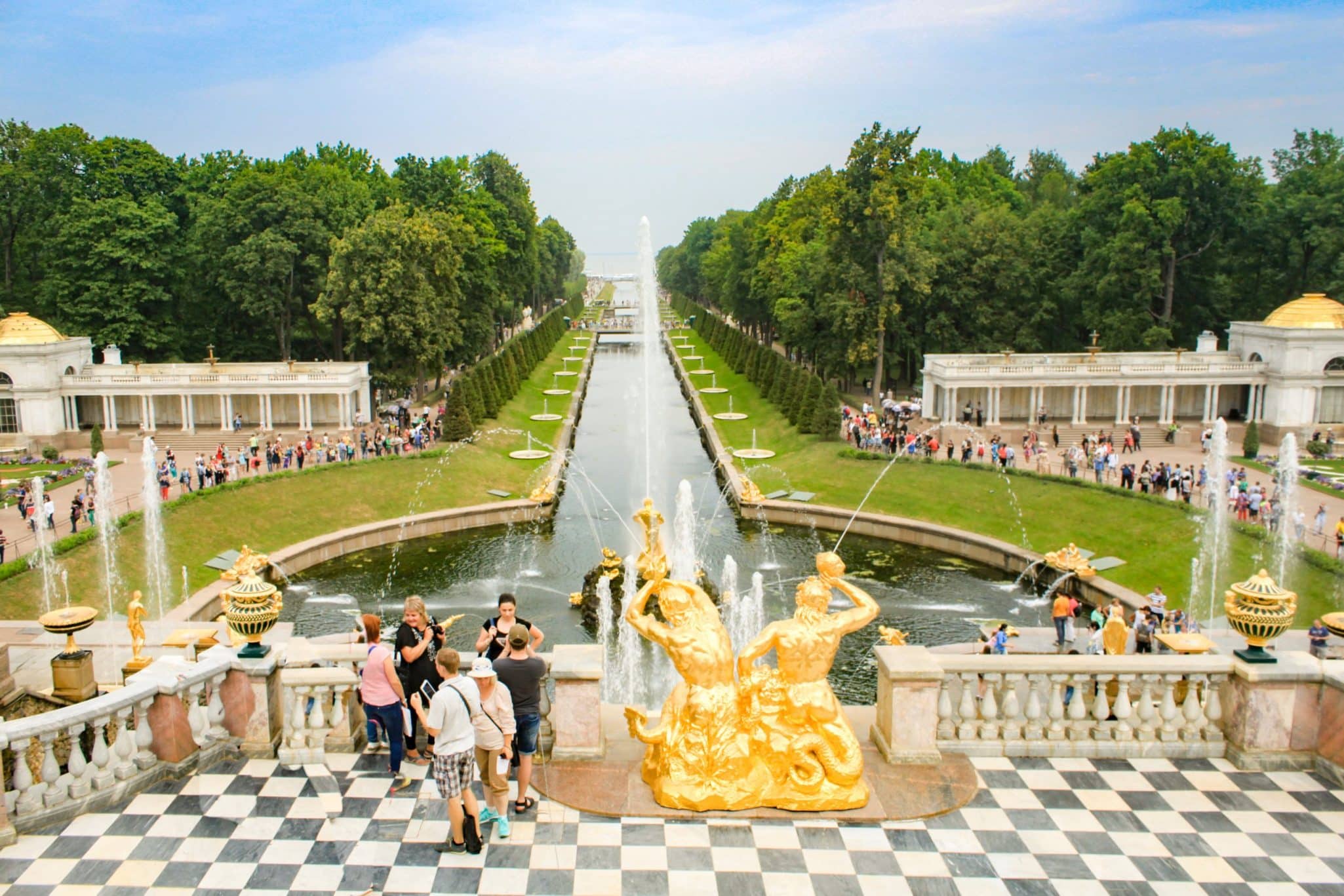 The most impressive cascade at Peterhof is the Grand Cascade. It’s situated above the upper and lower grottos.

Created in 1721, the Grand Cascade is among the world’s most sumptuous water fountains. Water runs down two sets of seven stairs accented by gilded sculptures. The Grand Cascade features 64 fountains, 37 sculptures, plus bas-reliefs, vases and statues of dolphins, lions and frogs. 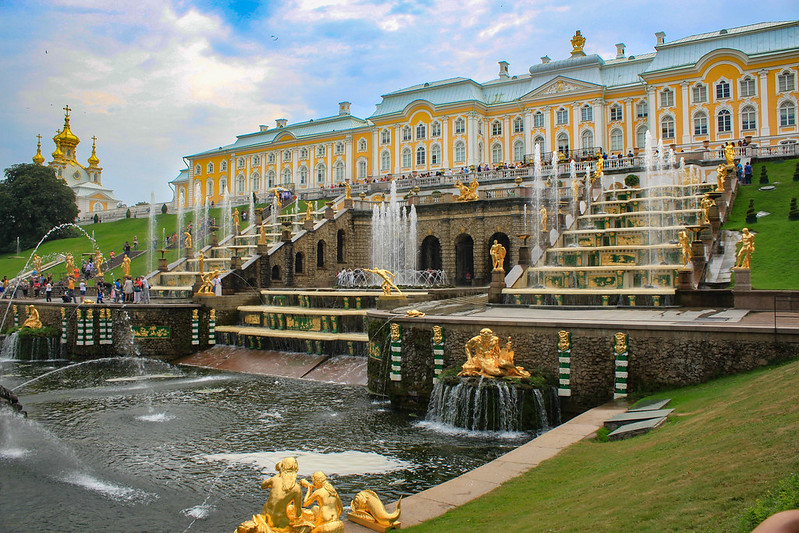 At the top of the Grand cascade is Samson. Notice how he’s tearing open a lion’s jaw. It symbolises – as so many things in St Petersburg do – Peter the Great’s victory over Sweden. It shoots a 20 meter high water jet from its mouth without a pump. 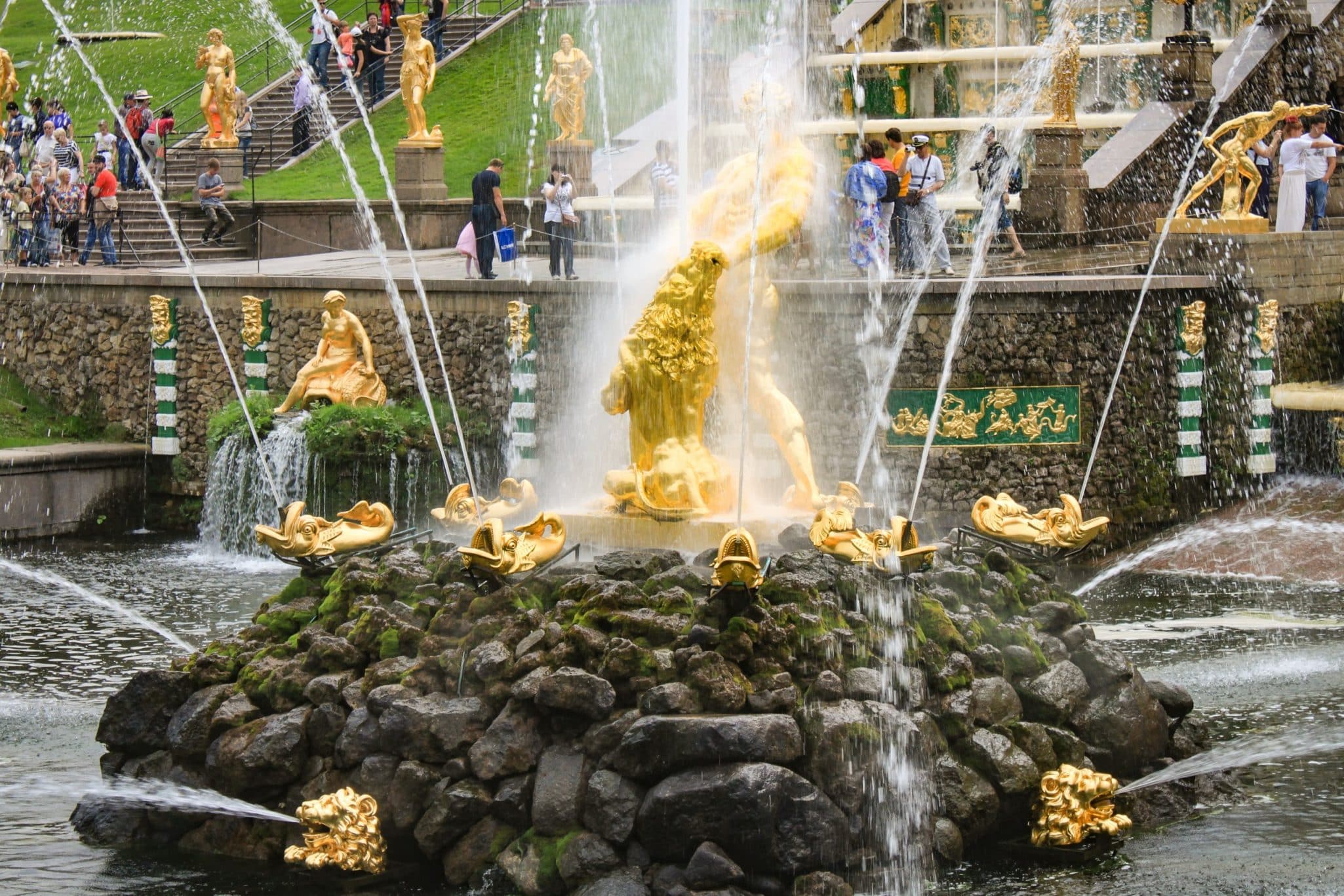 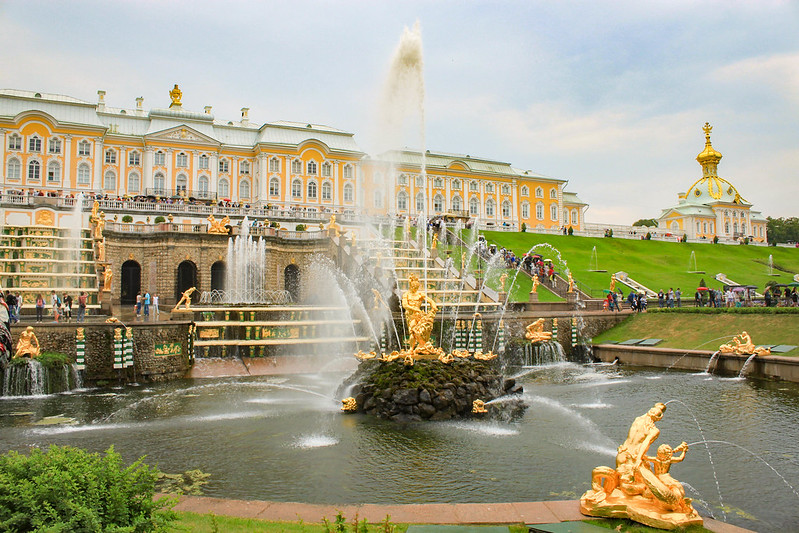 Grand Peterhof Palace and the Grand Cascade (The Lower Gardens)

The impressive Upper Garden dates back to the reign of Empress Elizabeth (1741-1762) and surrounds the Grand Palace.

The most noteworthy baroque sculptural group is “Neptune”, which you’ll find in the central pool. The sculpture of Neptune, the mythological god of the sea, has been there since 1799. 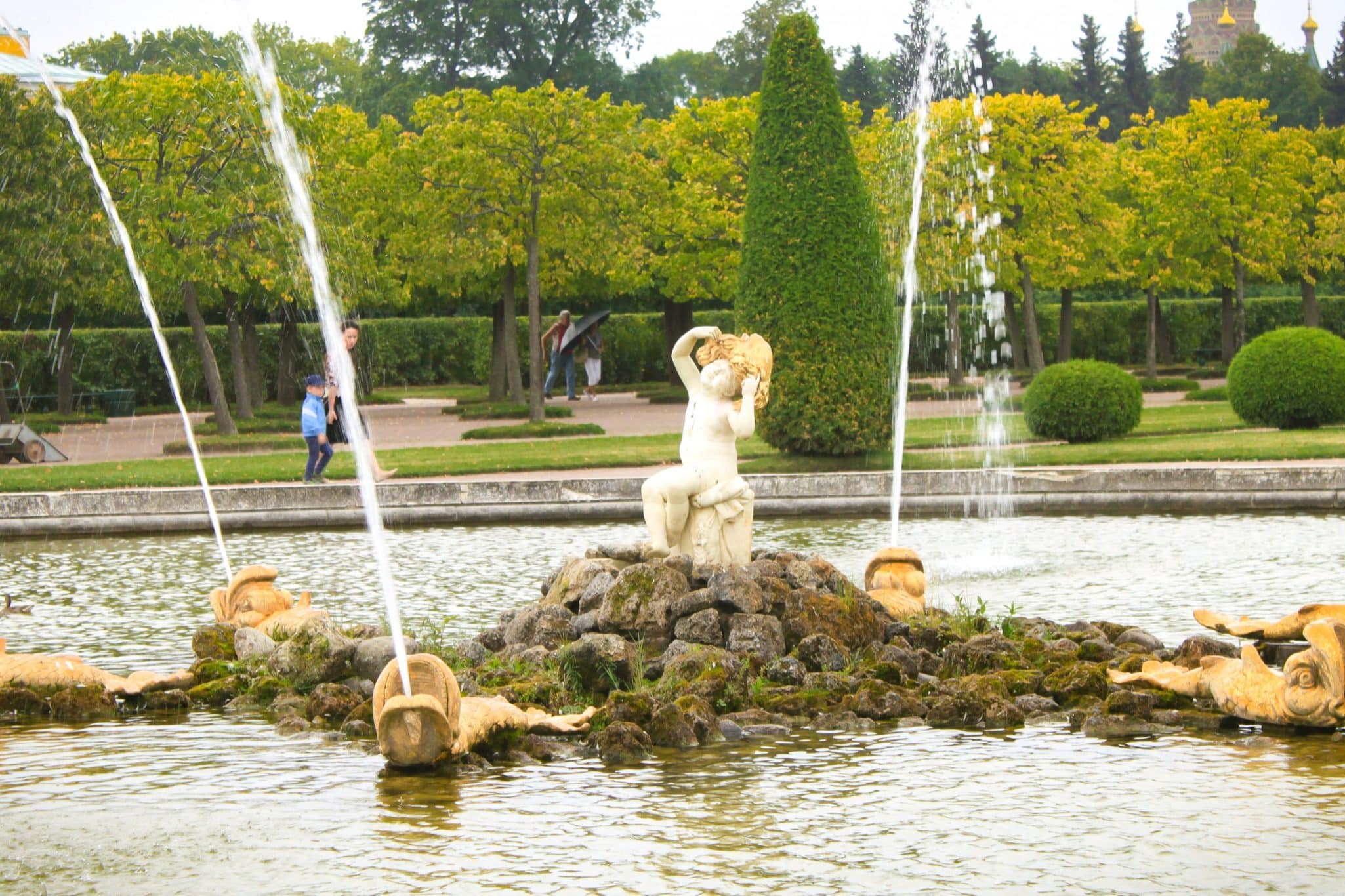 At the eastern wing of Peterhof Palace, you’ll find the Court Church. It was commissioned by Elizabeth Petrovna, the Empress of Russia (1741-1762) and dedicated to the Apostles Paul and Peter. 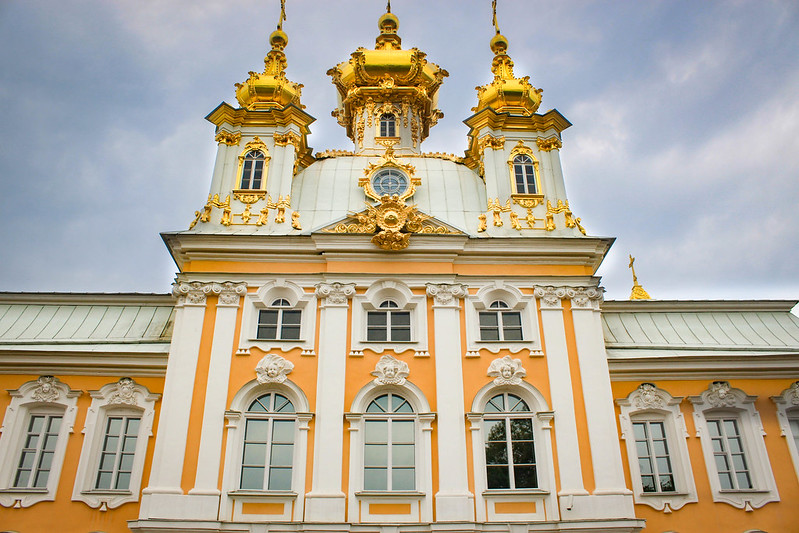 The Grand Palace is the highlight of Peterhof. So – you can expect a long line of people, especially in the summer, which makes it rather crowded and claustrophobic.

It’s worth it, though!

Photography and video is NOT allowed inside the Grand Palace.

Highlights of the Grand Palace: 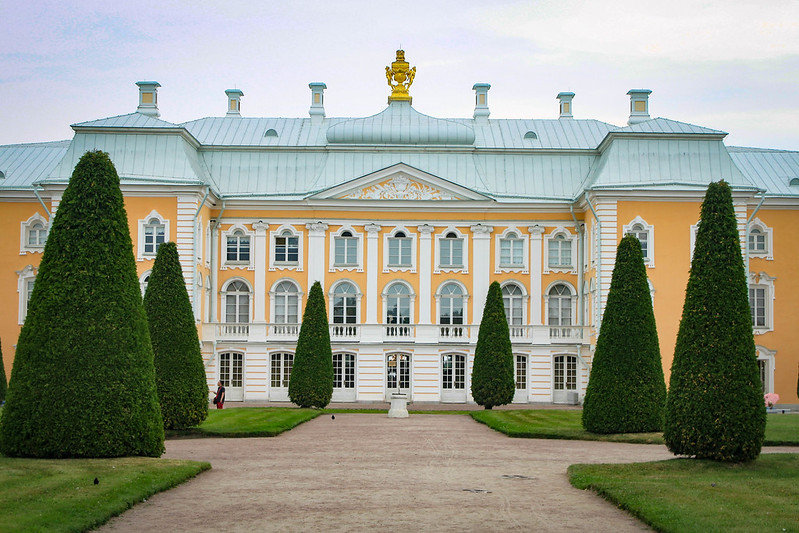 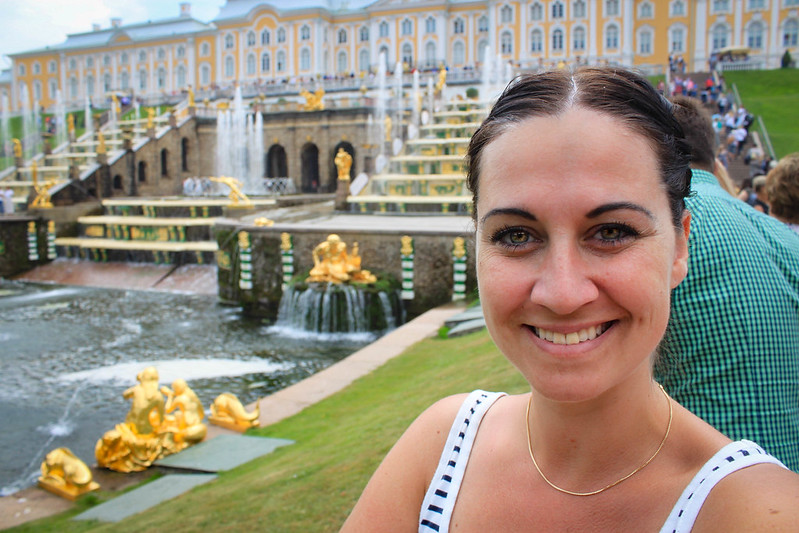 Most of the areas are open from 9am to 8pm. The Great Palace is closed on Mondays. Fountains operate only from May to early October.

The best time to visit is from early May to early October when the fountains are open. Crowds are heaviest during the weekends. So, my advice is to visit in the morning on a weekday from May to September.

How long to spend at Peterhof Palace

If you ask me, Peterhof Palace is a must for anyone visiting Saint Petersburg. But you should set a whole day aside for your visit. Transportation takes 2 hours in total, and you’ll need at least 3 hours to explore the Peterhof estate and gardens (and have some lunch).

Water and a warm sweater, even if you’re visiting in the summertime. I went there in August, and when it suddenly started raining, it got SUPER cold. 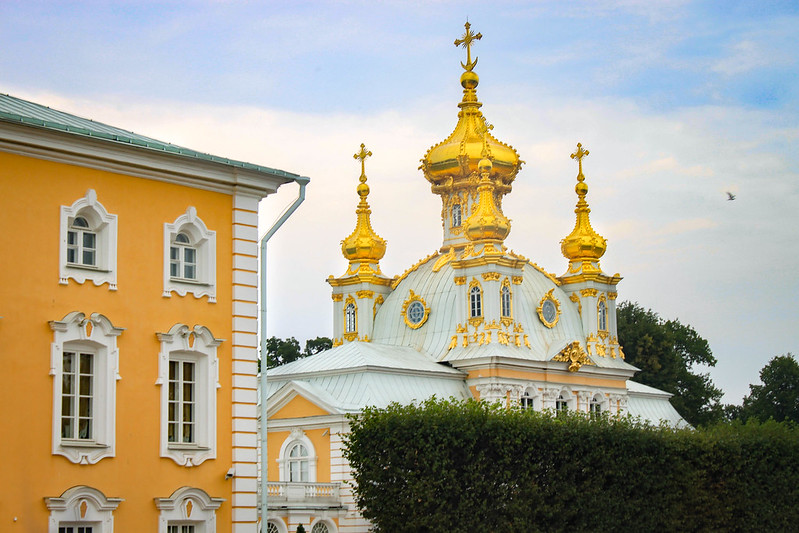 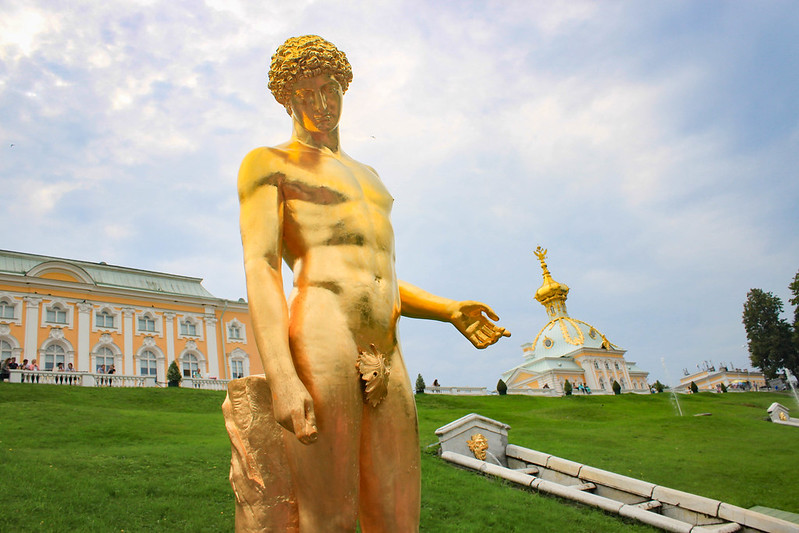 Planning to visit Peterhof? Ask me anything in the comments!