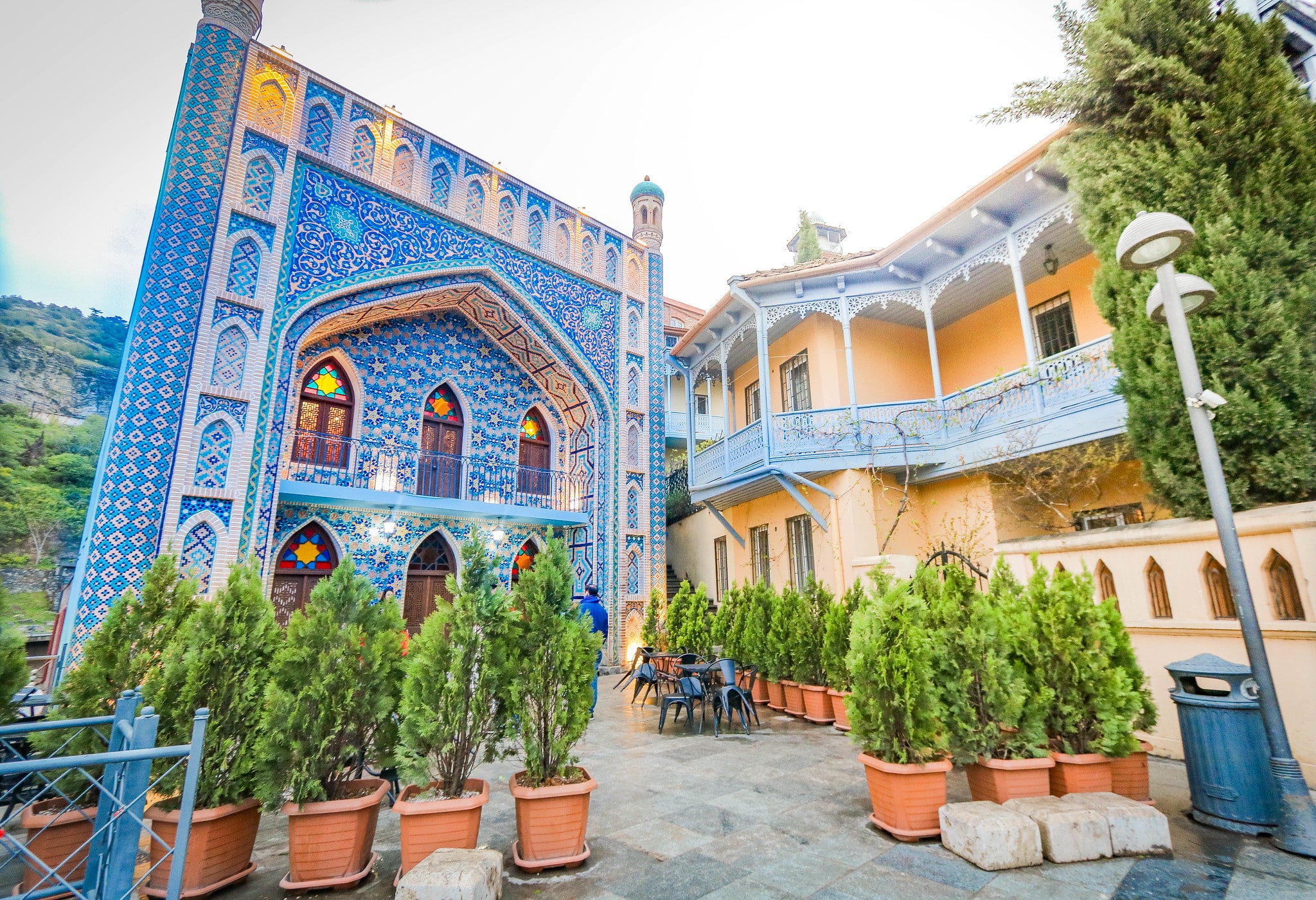 Georgia is one of the countries which make up the Caucasus region between Eastern Europe and Western Asia. It’s a uniquely beautiful country that represents a wonderful blend of eastern and western cultures, which can be seen in its food, religion, architecture, and traditions. It’s also still a rather undiscovered nation, all the more reason for you to go out and explore it.

Much of Georgia’s cuisine blends the styles of east and west amazingly. Like, for example, khinkali, which are dumplings that look strangely similar to Chinese bao but are made with lamb which gives them an almost Greek taste and texture. The food of Georgia is rich and exciting, no matter what you try or where you go, as long as you like bread, cheese, meat, soup, or stew.

Hike and Explore the Caucasus mountains

The Caucasus mountain range is one of the undeniably biggest draws to Georgia. A wild and rugged mountain range that will have you itching to climb and conquer it. Kazbegi is a national park on the slopes of the mountains which will grant you some of the best views of your life, and Svaneti is where you’ll find some of the hidden history of Georgia.

The Cave Towns of Vardzia

Georgia is defined by its wild hills and mountains, and so it might not be much of a surprise that you’ll find here a vast network of towns made of stone which are built into the mountains themselves. The cave towns can be explored at your leisure, though they are located far from the capital. Visiting them for yourself is more than worth the journey, though.

Georgia is a crossroads between Europe and Asia. It’s a nation predominantly Christian, and one of the earliest Christian countries on Earth. From what is now called the Middle East, Christianity spread through Georgia until it reached Rome and beyond. This means a lot of stunning churches and cathedrals. You’ll also find foods that are similar to those found in Greece as well as Middle Eastern spices, breads, and eating styles.

Consider the weather when you visit Georgia. The Caucasus Mountains and the Black Sea both impact the weather somewhat, so the East of the country is generally warmer but wetter and the West is dryer and colder.

If you visit in May, June, or September you’ll catch the best weather and avoid the freezing winter and particularly humid summer. However, if you’d like to catch the harvest season, particularly beautiful in the country’s vineyards, then make sure to visit in August.

Most countries can enter Georgia visa-free and stay for at least 90 days. US citizens can stay for up to one year.

Things to do in Georgia

This ancient capital has no shortage of amazing historical things to do. Like the Holy Trinity Cathedral, Jvari fort which sits on a mountain top, or Narikala, the remains of a 4th century fortress.

A national park on the slopes of the Caucasus mountain range. Kazbegi mountain is supposedly the site where the titan Prometheus was chained to a rock by Zeus, for gifting fire to humanity.

Anyone who has seen the original Star Wars or been to Cappadocia in Turkey will feel right at home in this majestic network of caves that blends seamlessly into the rocky landscape.

Georgia’s second city looks like it was torn from the pages of a vibrant fantasy novel. It sits at the edge of the Black Sea and, because of its gambling opportunities, has been dubbed ‘The Las Vegas of the Black Sea’.

A mountainous region of Georgia which pays no attention to the passage of time at all. This area has been frozen in a medieval setting full of snow-capped mountains and old stone forts.

One of Georgia’s oldest cities is very much defined by its religious architecture. See the incredible fortress-like monastery and 11th century cathedral for yourself.

15 brilliant things to do in Tbilisi Georgia