Copan Ruinas: Mayan temples in Honduras you must see 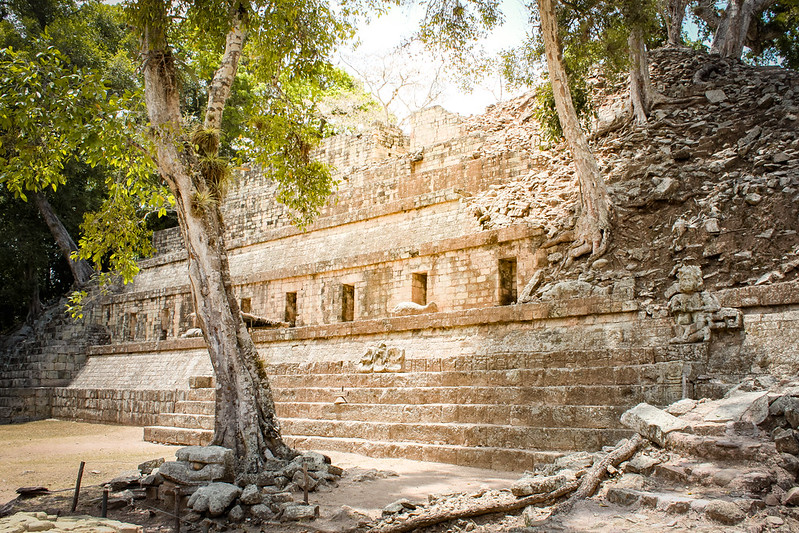 Copan Ruinas is a unique Mayan city in Western Honduras. It’s located in a fertile valley, nestled among beautiful hills, just by the border to Guatemala. If you’re interested in Mayan temples or just crossing the border overland, Copan ruins are definitely worth visiting.

What sets Copan apart from other more famous Mayan temples, like Tikal, Chichén Itzá or Palenque, are the impressive and well-kept pre-Columbian carvings.

Copan’s unique Maya sculptures, carved stelae and the incredible hieroglyphic stairway clearly shows the Mayan ceremonial faces, figures, and gods, which you simply have to imagine when the guides at the other ruins try to describe them. Here, you can actually see them.

In this post, I’ll share all the info, main monuments and spots you shouldn’t miss when you visit Copan Ruinas, the Mayan temples in Honduras.

Read next: San Pedro Sula, Honduras: Is it safe to visit?

What is Copan Ruinas?

Copán contains numerous structures, figures and hieroglyphs explaining the details of the ethnosphere in the Mayan city. As of today, only 26 ruins have been excavated, and an estimate of 4,000 are still waiting to be digged up.

The Mayan site of Copán is translated to “Wooden Bridge”, but it’s pronounced chu pee for “City of the Bird”. When you get there it’s easy to see why, as Copán is a natural habitat for the macaw, the national bird of Honduras. In the pre-Colombian period, the bird was believed to be a mediator between the goods and man.

Our guide, Gladys; a firm lady in her forties, explained that the city of Copán covers an area of 26 square kilometres and was named a UNESCO World Heritage Site in 1980. But today, the Honduran Government doesn’t have the funds for restoration of the site, so it’s no longer maintained. 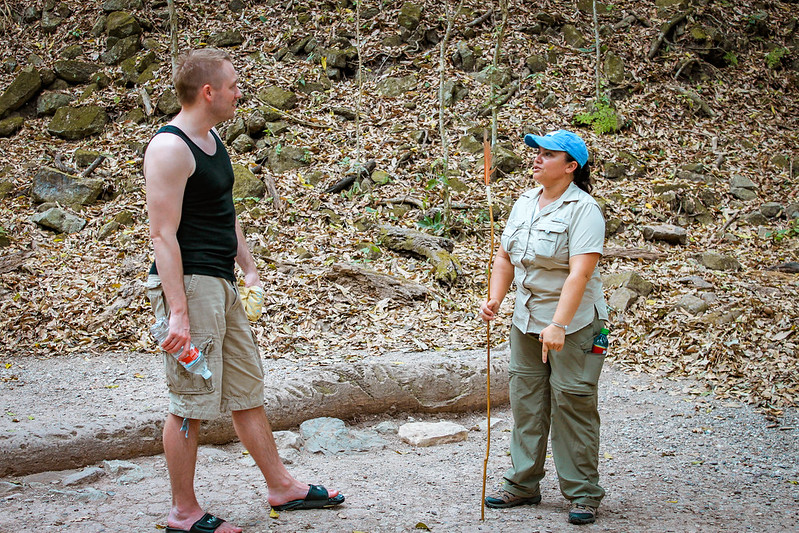 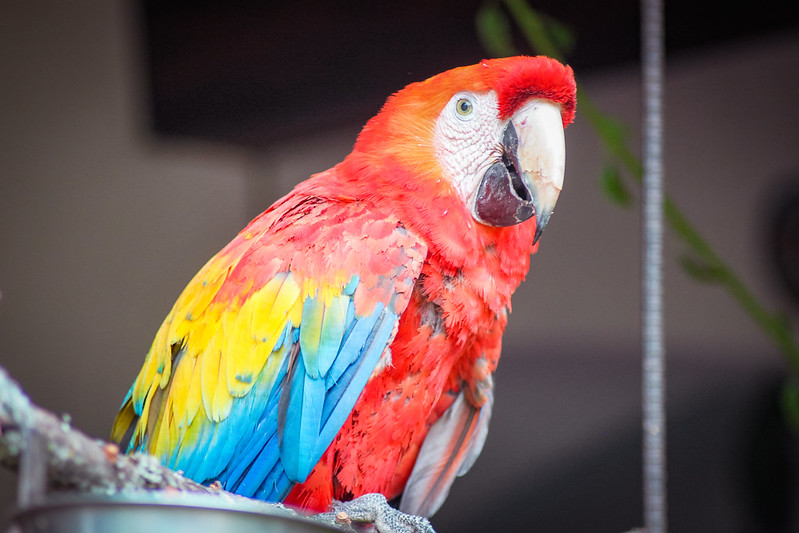 The entire site consists of two large pyramids, several stone temples, stairways and plazas, and a court for playing the ball game tlachtli. Most of these ruins are placed on a raised platform called the Acropolis or “high city” because it’s the highest point in Copán. 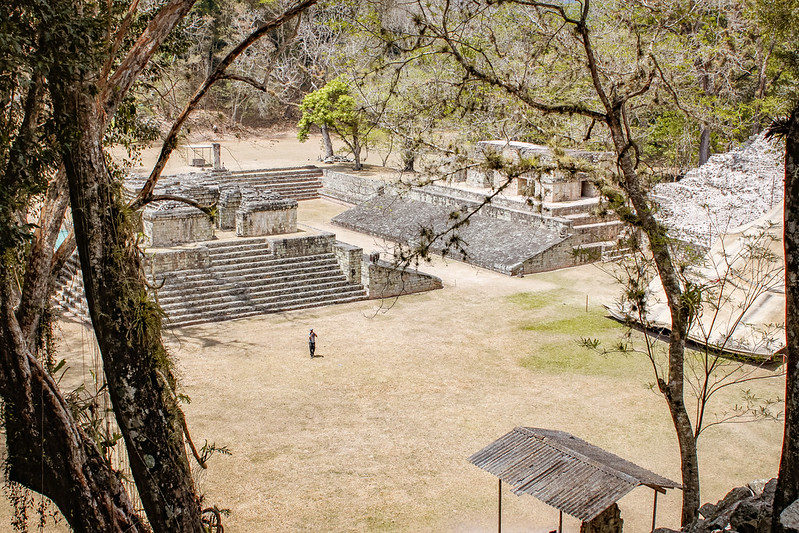 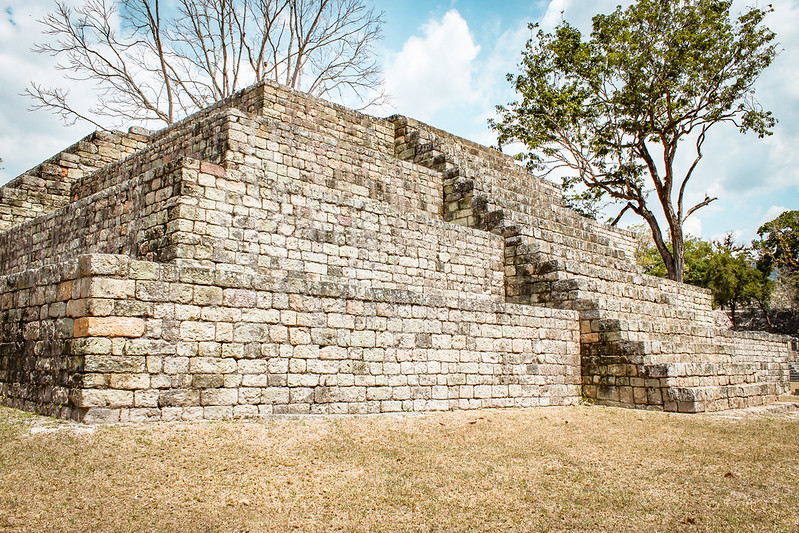 The Acropolis is a massive architectural complex considered to be the central axis point of Copán, around which the rest of the city was focused. The area is divided in two large areas: the west court and east court. The west court houses temple 11, which was built as a portal to the other world. Between the west and the east court is temple 16 with altar Q set at its base.

Altar Q depicts all the 16 rulers of the Copán dynasty from the first ruler, Yax K’uk’Mo’, to the last, Yax Pac, who ordered the altar built in 776.

You can climb to the top of temple 16, approximately 30 meter high, where you can see the whole ruin complex. 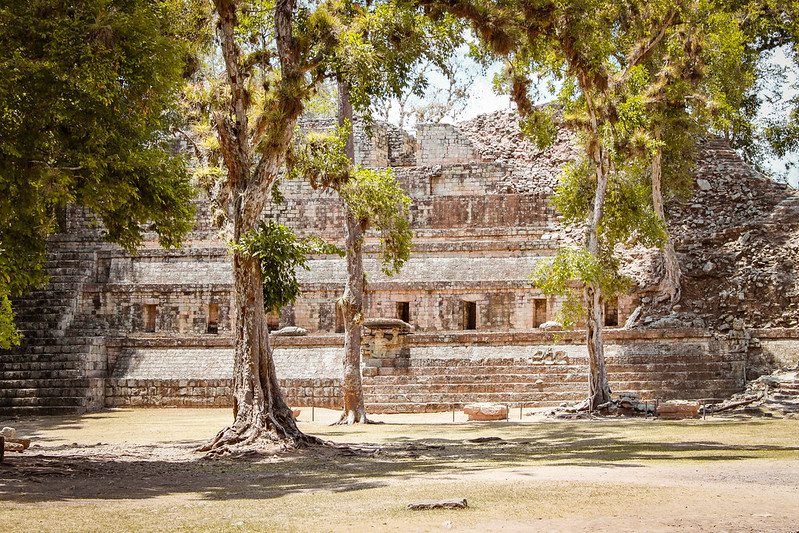 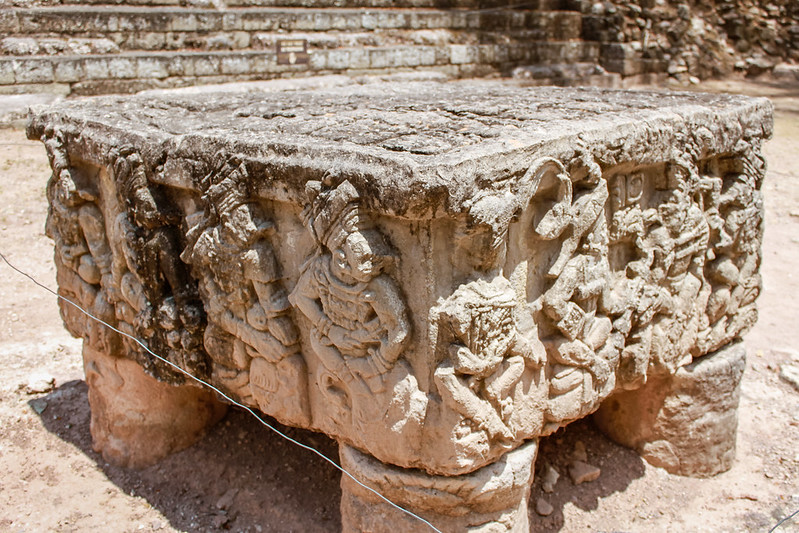 The Great Plaza houses many of Copán’s most famous stelae—freestanding sculptures carved on all four sides with pictures of gods, past rulers and hieroglyphics.

One of the most famous stelae is of Stela H (built in 730), which depicts a woman with a leopard skin under her dress. Another is 18 Rabbit (695–738), who was the 13th ruler of Copan. The area also includes the ball court, which is the second-largest court in Central America. 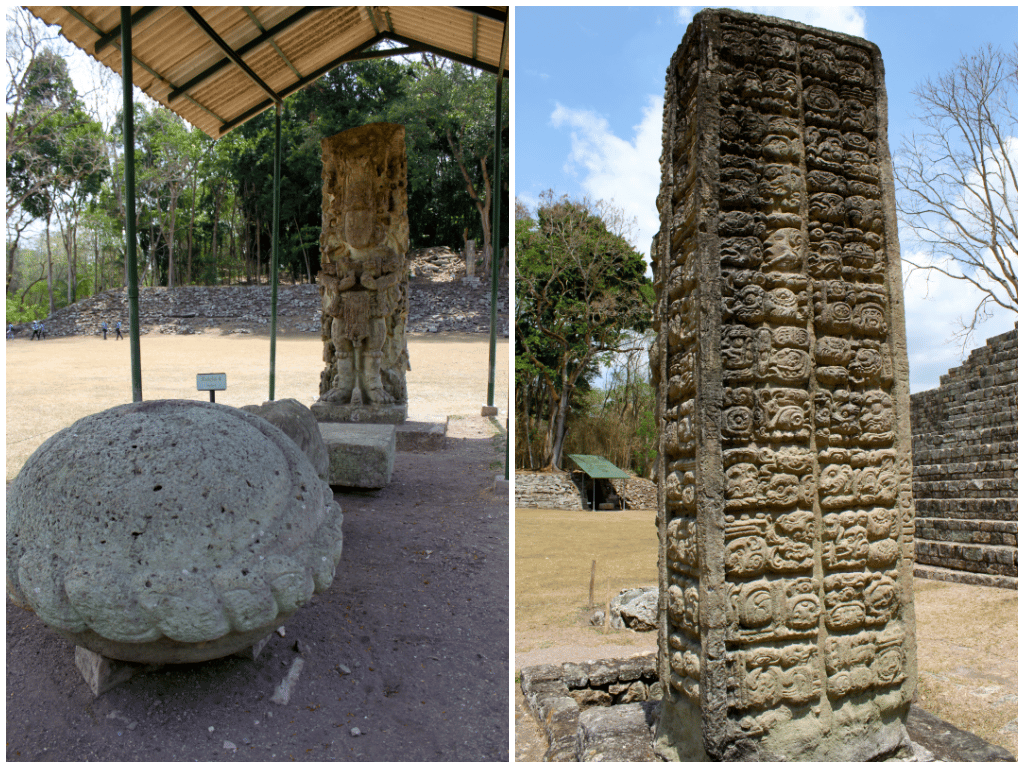 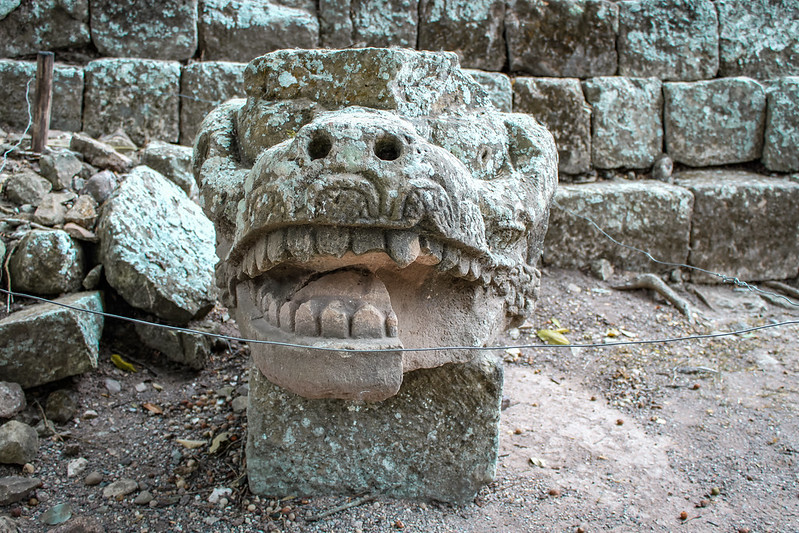 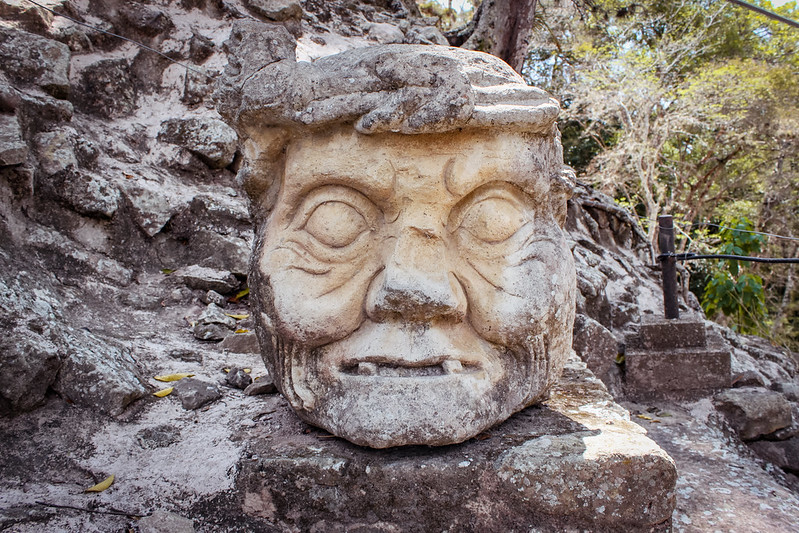 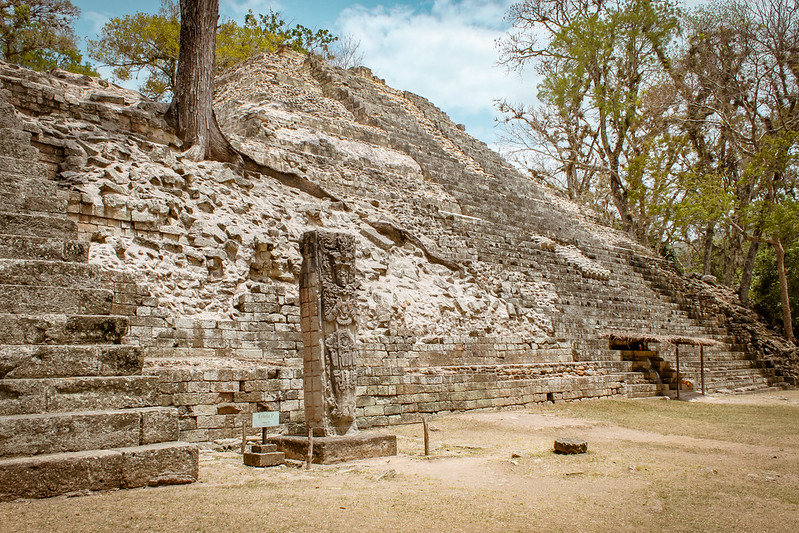 The Hieroglyphic Stairway is a must-see at Copan Ruinas. It’s the longest hieroglyphic inscription found anywhere in the Americas and has 64 steps with more than 1,093 glyphs.

It was built in 753 by Smoke Shell, the 15th King of the Mayans, to depict the history of Copán’s previous rulers. At some point, the stairs collapsed and were assembled in the current, random order. Archaeologists believe that the 15 lower steps are in the correct position and they’re working on re-creating the original order. If they succeed, they’ll be able to decipher the long inscription by Smoke Shell. 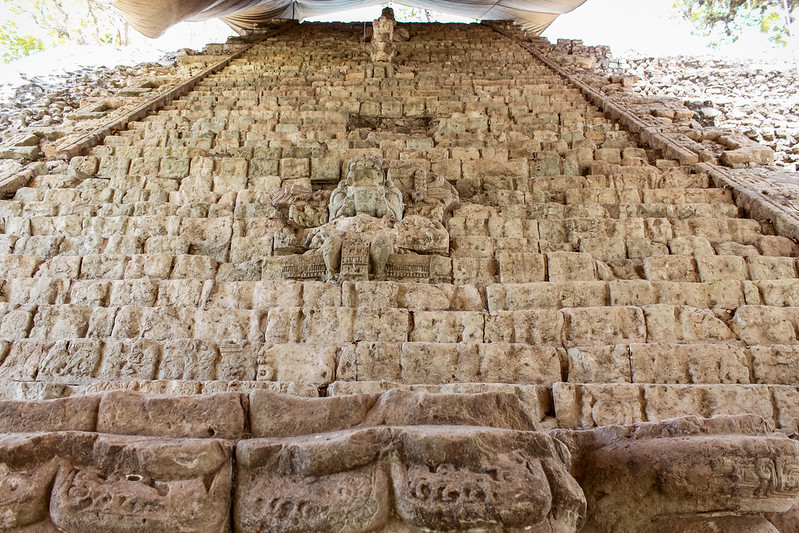 Underneath the Acropolis is 4km of tunnels, and two of them are open to the public: Rosalila and Los Jaguares Tunnel.

Rosalila is located below Temple 16 and considered the best-preserved temple in Copan. You can access the short tunnel for a $15 fee.

The fee also gives you access to Los Jaguares Tunnel, the second tunnel, which is 700 meters long. It contains one of the most important tombs in Copan; Galindo’s Tomb, named for the 19th century explorer who discovered it. 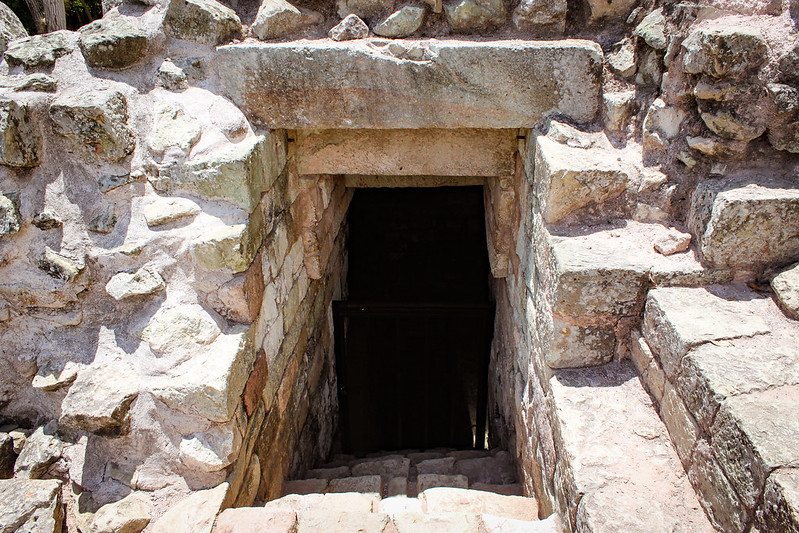 About 2 km walk from the main ruins is Las Sepulturas, which got its name “the tombs” from the many nobles who were buried here. The site shows the day-to-day lives of Copán’s ruling elite.

You can either walk or take a tuk-tuk to Las Sepulturas. Once you get there, you can hire a guide for a tour of the place or just wander on your own. 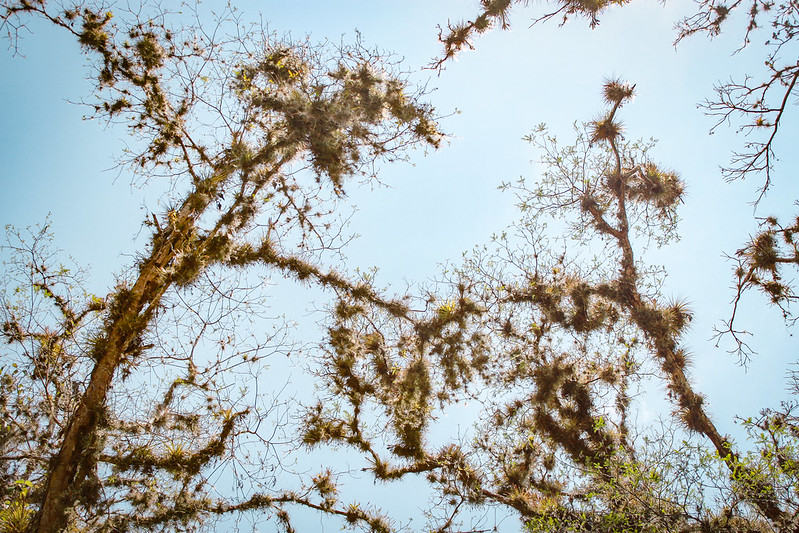 Prices and hours of the Copan Ruins

It took us a good two hours to walk around the Mayan temples in Honduras, and when the tour was over, we were picked up by our driver. We paid US$15 (per person) for the entrance fee and $25 for a guide. Depending on the season, I would recommend to be there when it opens at 8am, as the place gets quite hot by mid-day. 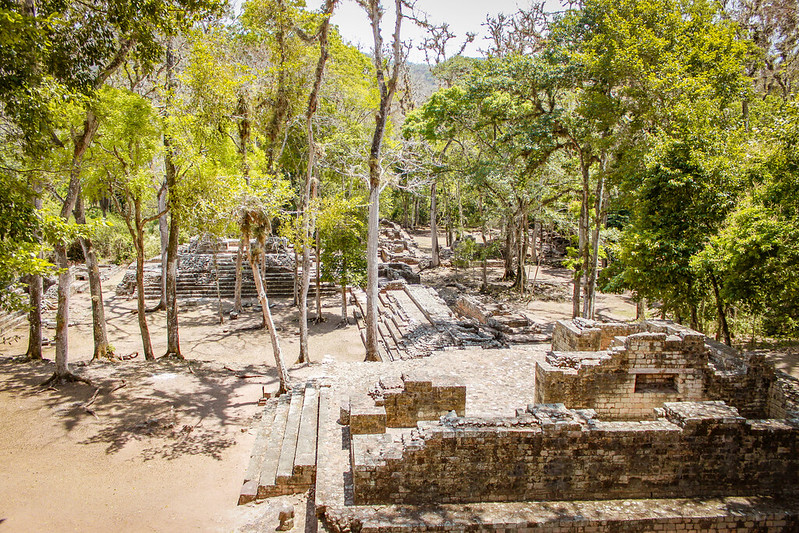 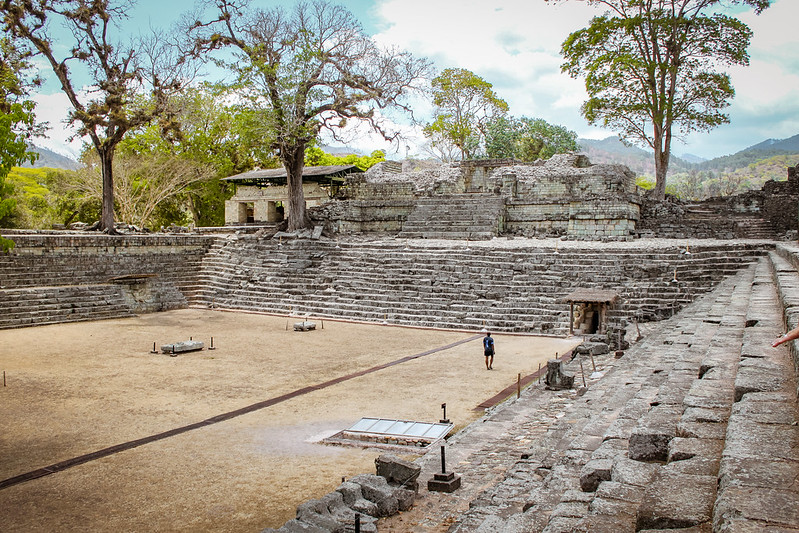 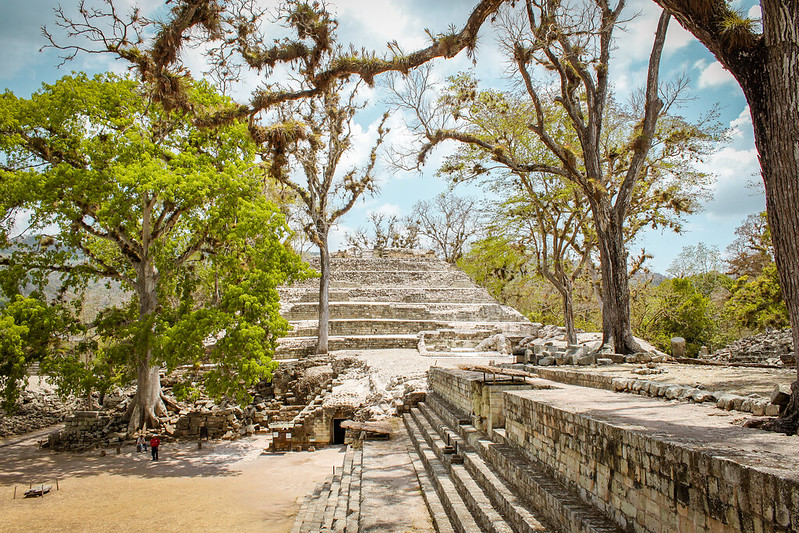 Things to do in Copan Ruinas (the town)

The Maya site of Copan pleasantly surprised me, and I found the town of Copán Ruinas just as delightful as the ruins. The town centre is lined with well-preserved colonial buildings and the cobble-stoned streets have lots of tourist-friendly restaurants and cafes.

While the Mayan ruins are the main attraction, there are other great things to do in Copan. These are the top activities after you’ve visited the ruins: 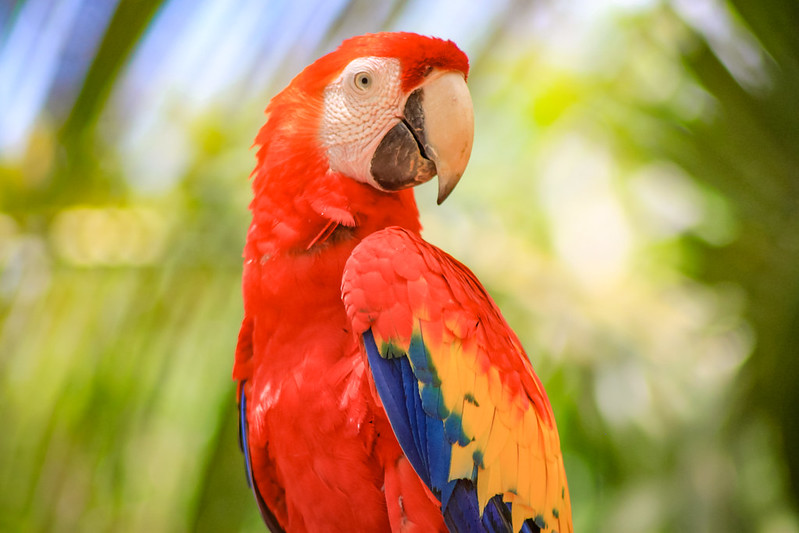 Carnitas Nia Lola – Fun and groovy atmosphere and good home cooked Honduran food at affordable prices. I loved how the waitresses serve your plate on the top of their heads. Try the grilled meats.

The Cafe at La Casa de Cafe – Great breakfast and a lovely view from the terrace. The staff is very friendly and attentive.

Sol de Copan – If you’re in the mood for German beer and food, this is where to go. Try the sausages. 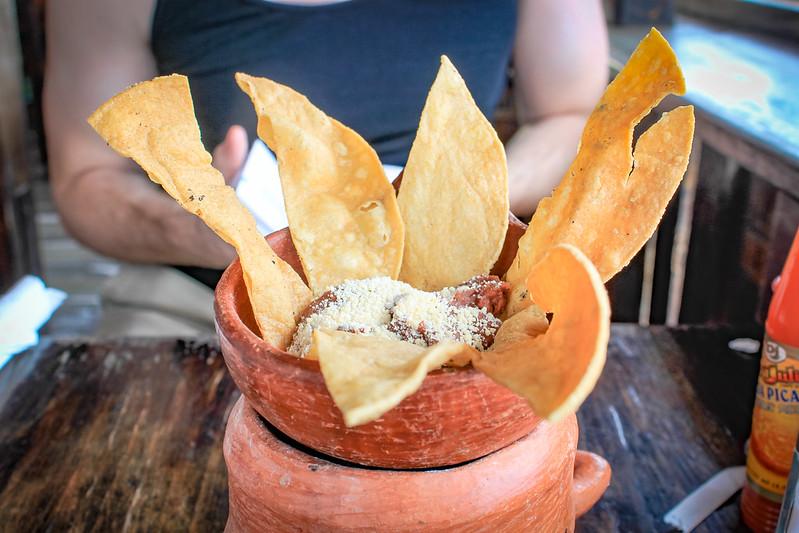 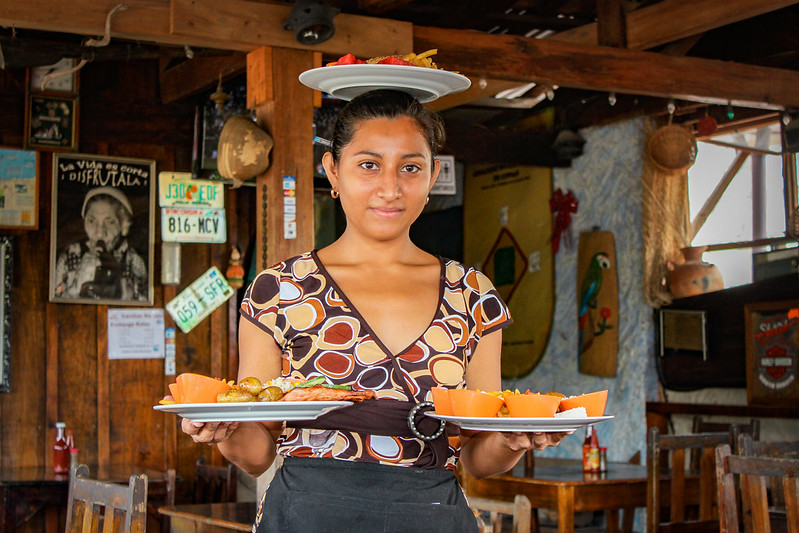 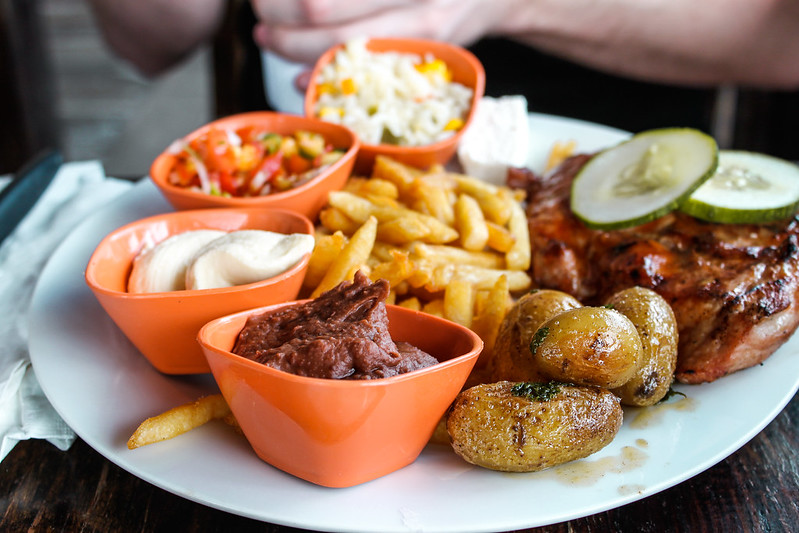 Getting to Copan Ruinas

By International bus: The Honduran bus company Hedman Alas has daily departures to both Guatemala and San Pedro Sula in Honduras.

By shuttle: You can get a shuttle from Guatemala, but I wouldn’t recommend shuttles in Honduras. They’re not as safe.

By private driver: You could also consider booking a private driver (like we did), which gives you more freedom, but is pricier. We paid $150 to get from San Pedro Sula to Copan Ruinas with Miguel Raymundo. He is bilingual, reliable, and a very nice guy. You can contact him at: [email protected] 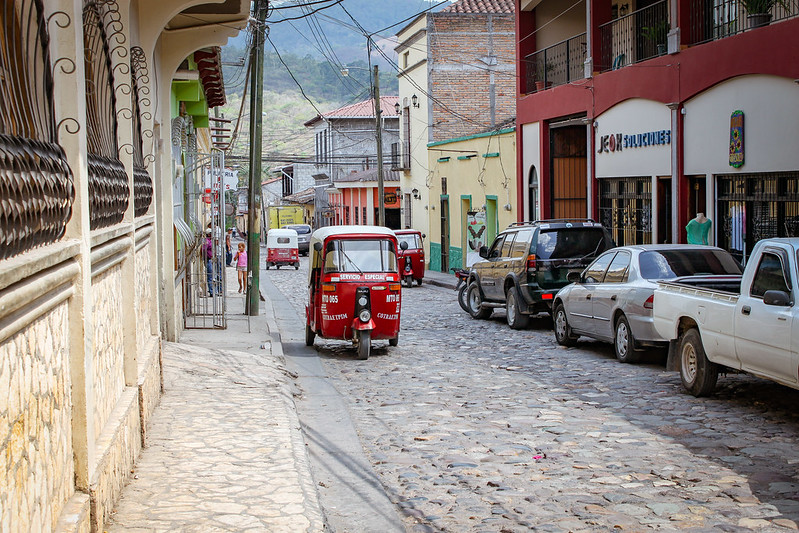 Planning to visit Copan Ruinas? Ask me anything in the comments! 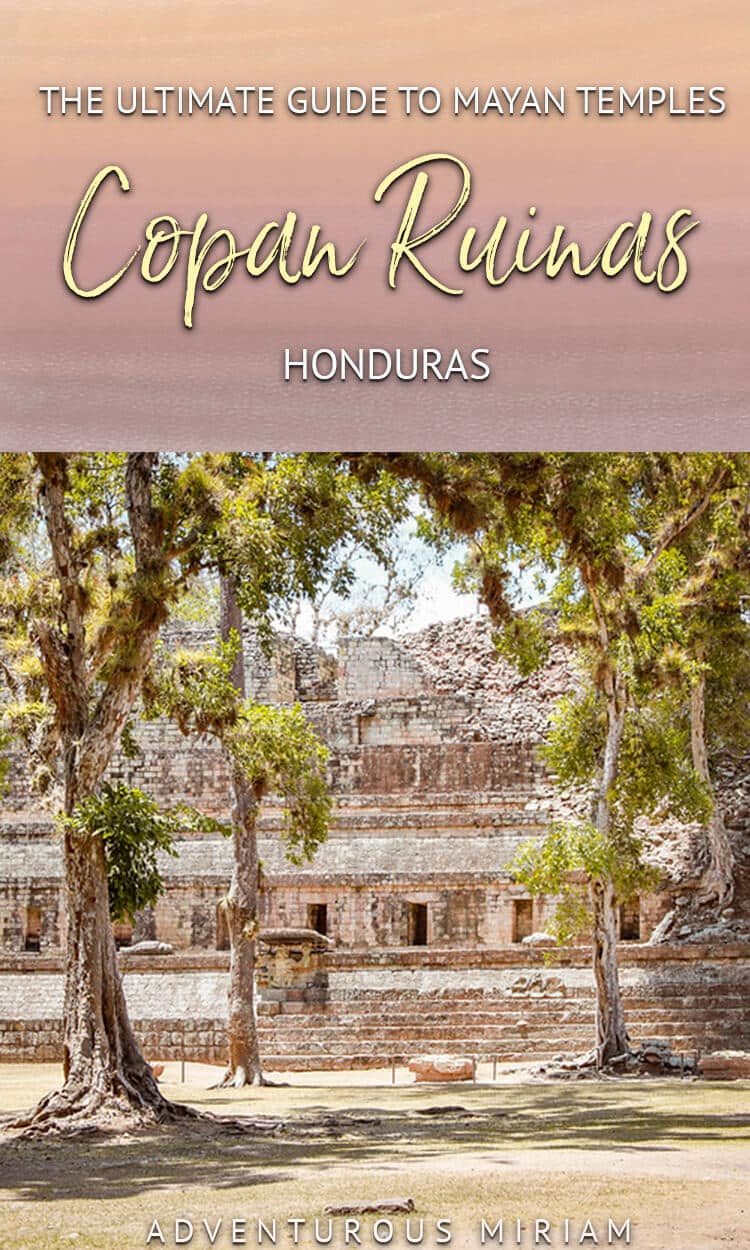